From Dangal to Sanju! Top 10 films that crossed the Rs 200 crore mark fastest

The parameters of movie business have undergone a paradigm shift. It is no more how much was earned, it is now more about how fast that amount was earned.

In 1940, when PC Barua's KL Saigal-starrer Zindagi released, it became the highest-earner of the year. Zindagi was a blockbuster that earned around Rs 55 lakh. From there on box office collections were on a steady incline. In 1960, Mughal-e-Azam earned an unprecedented Rs 11 crore, that was swiftly overtaken next year by Ganga Jumna. In 1975, Sholay, one of Bollywood's most-loved movies was released and it went on to make Rs 35 crore. After seven years, in 1982, Mithun Chakraborty-starrer Disco Dancer made a lifetime business of Rs 100 crore worldwide. Twelve years later, in 1994, Hum Aapke Hain Koun surpassed Disco Dancer's record and made a lifetime business of Rs 135 crore. In 2008, Ghajini changed the game altogether with its worldwide collection of Rs 232 crore. If that was a game-changer, it didn't last for long, as Rajkumar Hirani's 3 Idiots raked in Rs 460 crore the following year. The entire history of Hindi cinema up till 2008 was on one side, and Hirani's 3 Idiots on the other, scaling new heights and bridging the gap between 100 crores so fast that it became difficult to keep track. Bollywood had jumped from the Rs 200 crore club to Rs 400 crore club in a year.

From thereon it's been about breaching the next frontier. With Dangal, we have now entered the realm of Rs 2000 crore. While there are a handful of movies that have seen that kind of adulation, more and more movies are making it to the Rs 100 crore club. Though fewer, there are also a host of movies that have earned Rs 200 crore. In fact, now the parameters of movie business have undergone a paradigm shift. It is no more how much was earned, it is now more about how fast that amount was earned.

Here's a look back at the fastest-Rs 200 crore-earning Hindi movies:

1. Sanju: Ranbir Kapoor's latest offering, a biopic on Sanjay Dutt, directed by Rajkumar Hirani minted Rs 200 crore in just 7 days. According to latest reports, the movie's collection till Thursday was Rs 202.51 crore. The movie's collections are also fuelled by the positive word-of-mouth and the raving reviews. However, it remains to be seen how much the movie would collect in the long run.

2. Sultan: Salman Khan-Anushka Sharma-starrer wrestling drama is one of the highest-grossing Hindi movies of all time. But it holds the record of making the fastest Rs 200 crore, surpassing its competitors, albeit by an inch. Sultan earned Rs 208 crore in 7 days. The movie eventually made a worldwide collection of Rs 590 crore.

3. Baahubali 2 (Hindi): Prabhas' movie that broke every record imaginable collected Rs 200 crore in 6 days. By the end of the week, the second part of SS Rajamouli's magnum opus raked in almost Rs 250 crore. To put it in perspective, that is more than the lifetime business of most movies. 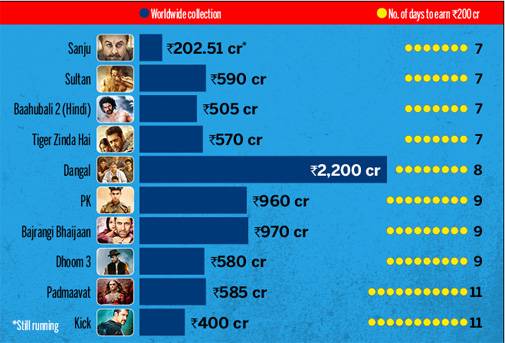 4. Tiger Zinda Hain: Another Salman Khan money-spinner that cashed in on the fact that it was released on Christmas collected Rs 206 crore in 7 days. TZH featuring Katrina Kaif in the female lead eventually went on to earn Rs 570 crore worldwide to become one of the highest-grossing movies of the Hindi film industry.

5. Dangal: Aamir Khan's best movie till date is also India's highest-grosser. However, Dangal could not break Sultan and Baahubali 2's record. It earned Rs 200 crore in 8 days. Dangal went on to create other records such as the highest-grossing non-English movie in China or 2017's number 1 movie on Chinese IMDb.

6. PK: Another of Rajkumar Hirani's blockbuster hits that sent the cash registers ringing is Aamir Khan-Anushka Sharma-starrer PK. It collected Rs 200 crore in 9 days. It eventually went on to earn Rs 960 crore worldwide.

7. Bajrangi Bhaijaan: Yet another Salman Khan-starrer on the list. Bajrangi Bhaijaan, co-starring Kareena Kapoor and Nawazuddin Siddiqui, earned Rs 200 crore in 9 days. Kabir Khan's blockbuster movie is another of India's highest-grossing movies with a worldwide collection of Rs 970 crore.

8. Dhoom 3: The third instalment of the Dhoom series is also its highest-earner. The heist film starring Aamir Khan, Katrina Kaif and Jackie Shroff, along with the Dhoom movies regulars, Abhishek Bachchan and Uday Chopra made Rs 200 crore in 9 days as well. Dhoom 3 earned as estimated Rs 580 crore worldwide.