The war-drama is only ranked below Rajesh Khanna-Amitabh Bachchan-starrer Anand. While it is on the third spot, it shares the same rating as Ajay Devgn-starrer Drishyam, and Kamal Haasan's Nayakan. 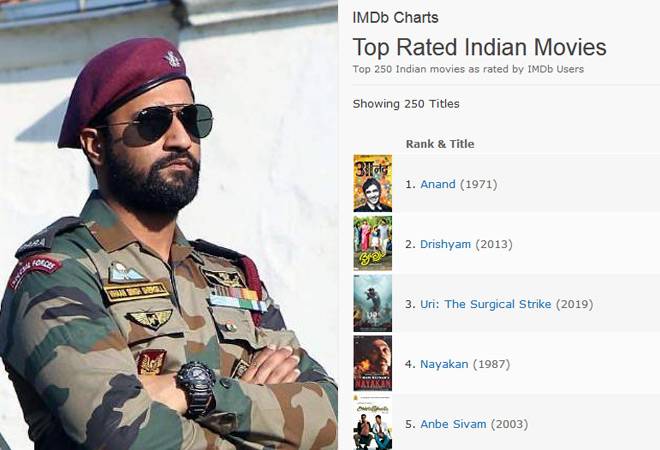 Vicky Kaushal-Yami Gautam's Uri: The Surgical Strike has not only become a raging hit but has also made its way into the hallowed halls of IMDb top-rated movies lists. Vicky Kaushal's biggest hit as a lead actor till date has bagged the third spot on IMDb's list of Top Rated Indian Movies. The war-drama is only ranked below Rajesh Khanna-Amitabh Bachchan-starrer Anand. While it is on the third spot, it shares the same rating as Ajay Devgn-starrer Drishyam, and Kamal Haasan's Nayakan.

These ratings are based on a weighted average of user ratings. All the films on the list have received at least 5,000 user votes. The list includes the top 250 movies in terms of ratings.

The top 10 movies on this list are Anand with a rating of 8.7, followed by Drishyam with 8.6, Uri with 8.6, Nayakan with 8.6, Kamal Haasan's Anbe Sivam with 8.5, Amol Palekar's Gol Maal with 8.5, Madhavan's Vikram Vedha with 8.5, Anurag Kashyap-directed Black Friday with 8.5, Ayushmann Khurrana's Andhadhun with 8.4 and Radha Ravi's Ratsasan with 8.4. Aamir Khan's blockbuster hit Dangal, which is India's highest-earning movie in history is on the 11th spot with a rating of 8.4.

Uri is based on the real events of the surgical strike by the Indian Army in 2016 in retaliation of the terror attack on the army camp in Jammu and Kashmir's Uri. The movies dialogue, "How's the josh?" is now seared into the realm of Indian pop-culture. Even union ministers have not shied away from using the dialogue.

Not only a good rating, Uri is also making waves at the box office. In India alone, the movie has made Rs 228.78 crore. According to trade analyst Taran Adarsh, Uri could take on Ranveer Singh and Sara Ali Khan's Simmba that made Rs 250 crore in India.