We, the powerful, need to get out of the way, to pick the barriers apart, the ones that give us names and races and colours and hierarchies, he said. 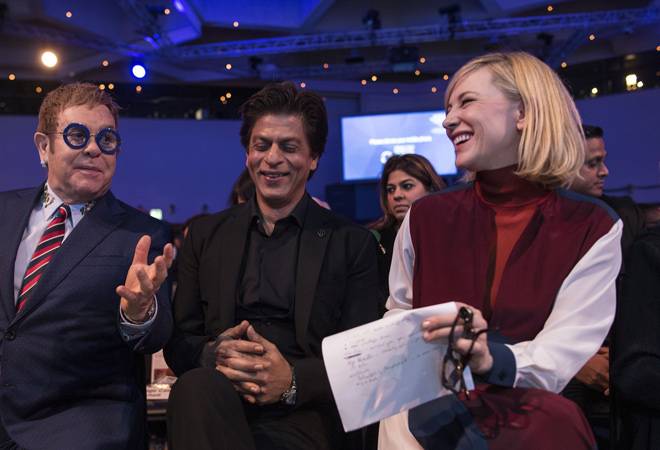 Shah Rukh Khan was awarded the Crystal Award at the World Economic Forum 2018 that is currently underway in Davos, Switzerland. The superstar was awarded this humanitarian award along with Sir Elton John and Cate Blanchett, for his efforts to rehabilitate acid attack survivors through his non-profit organisation, Meer Foundation.

Shah Rukh Khan took the stage and delivered an acceptance speech that was seamlessly in line with the superstar's wit and charm. Right after taking the stage, the actor asked Cate Blanchett and Sir Elton John for a selfie. "There, I have embarrassed my children," he said.

He said that when he came across a lady a few years ago who was brutalised by acid, his life or rather the perspective of it changed forever. "To disfigure a woman by throwing acid on her face is, to me, one the basest, crudest acts of subjugation imaginable. At the source of it lies the view that a woman does not have the right to assert her choice, to say to the advances of a man or a group of people. And yet, each of the women I met, I found within them, the courage to move on with their lives and to reject the idea of victimhood. What struck me most about them was this - what was done to them only made them braver and stronger and more able to free themselves to make the choices that everyone around them was telling them they could not make or should not make," he said.

At the gathering that was attended by some of the most powerful people in the world, the superstar tackled the very concept of it - power. "Power, actually needs a complete reversal, more than any other thing in the world. I was babysitting my five-year-old son before I came here and suddenly he screamed, 'Papa, Papa my eye went into my hair. Can you please get my eye out of the hair?' - He didn't say get my hair out of my eye, like we all believe they do. It's a bit like that when you have power, I guess. You think things get in its way but actually it is the power getting into the way," he said.

"We, the powerful, need to get out of the way, to pick the barriers apart, the ones that give us names and races and colours and hierarchies," he further added.

He ended the acceptance note by thanking his sister, Shehnaz Lalarukh Khan, his wife, Gauri Khan and his daughter Suhana Khan, for teaching him the value of requesting.