For the Elon Musk fanboys, it’s the holy grail of innovation. However, the response from the automotive folks is a mixed bag.

After all, Tesla is a company which was initially eschewed by investors and dismissed by Detroit carmakers.
Aayush Ailawadi

Tesla is a brand that elicits very different reactions from technology and automobile enthusiasts. For the Elon Musk fanboys, it’s the holy grail of innovation. However, the response from the automotive folks is a mixed bag. After all, Tesla is a company which was initially eschewed by investors and dismissed by Detroit carmakers.

Now, it is the same company which is compelling the entire industry to innovate at a rapid pace. But, is it a tech company that manufactures cars or an automobile company that excels at making electric vehicles? When will it officially launch in India? How will its electric cars perform on Indian roads? We spent a day with India’s only Model 3 in the search for some answers.

For the past few months, there have been reports of Tesla test cars being spotted in Indian cities, most of them have been camouflaged or decked up with testing apparatus. But, VS Reddy, founder and chairman of British Biologicals recently broke the bank to import a Model 3 from the UK and was nice enough to lend it to us for a day of testing in Bengaluru.

The vehicle tested by us was a Tesla Model 3 “Long Range” which can belt out more than 500 kms on a single charge. This beast of an EV is powered by dual electric motors with nearly 450 horsepower and it doesn’t fail to impress as soon as you floor the accelerator.

As soon as you enter the vehicle, it’s clear that you’re in for no ordinary experience. For starters, there’s no key or button to be pressed. Instead, you have a Tesla card, which looks much like a credit card and can fit very snugly into your MagSafe wallet or credit card holder. Tap it on the side of the door, and as soon as the side rear view mirrors open up, voila, you’re in!

Inside, the cabin is a breath of fresh air. Minimalistic and no clutter- tailor made for its target group of millennials. In fact, this minimalistic interior is what sets it apart from other manufacturers trying too hard to differentiate in a cluttered market. The absence of a clunky electronic instrument cluster is quite refreshing. 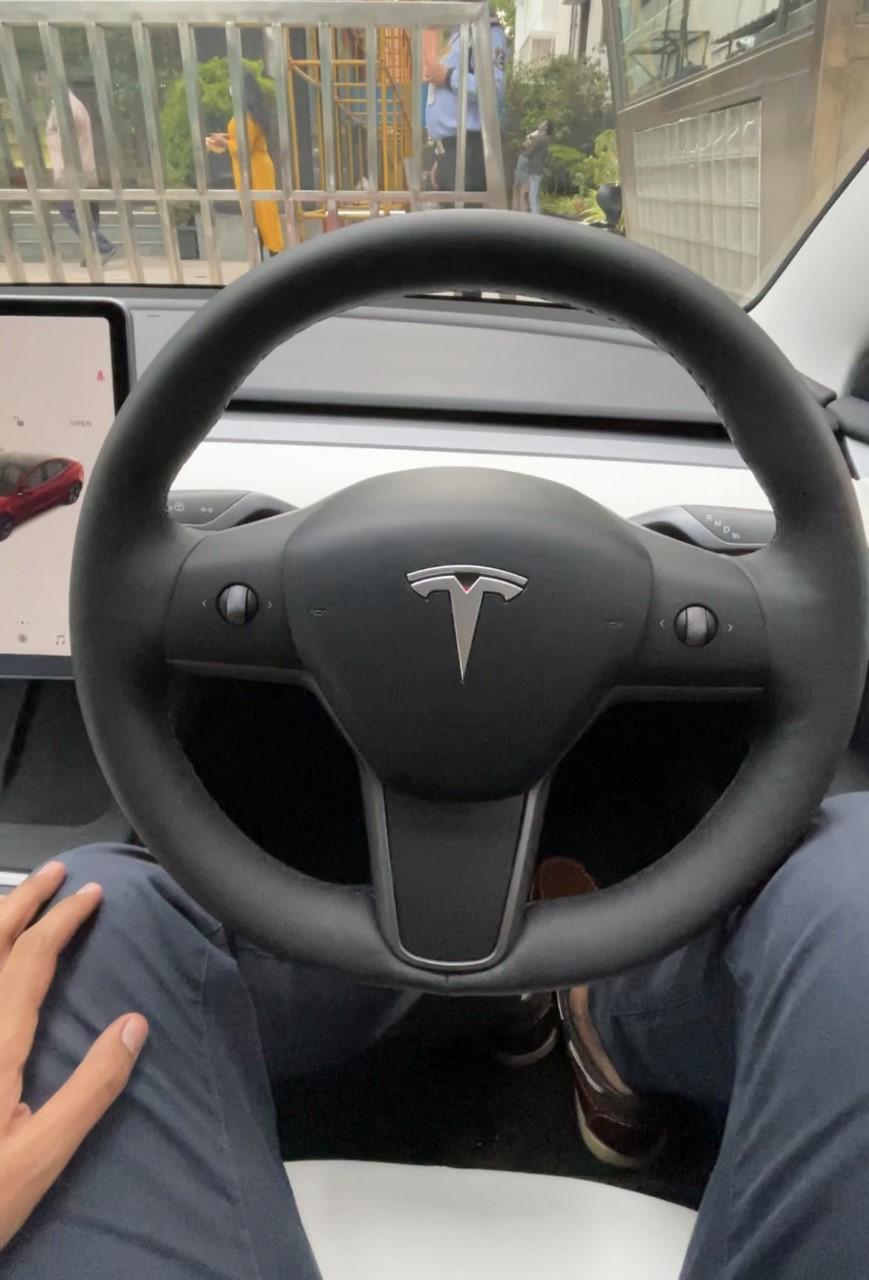 Instead, you are greeted by the iconic Tesla touchscreen user experience. This 15 inch touchscreen is the heart and soul of the car and proof that Tesla’s core strength lies in its technology. Other carmakers can certainly take a leaf out of Tesla’s book in this department.

The touchscreen experience is smooth and responsive and didn’t lag or hang throughout the time that we were testing it. Just like any top tech company, the OTA software updates are quite regular and feature packed, leaving most car owners excited as an update improves the in-car and ownership experience.

There’s several easter eggs to be found in the form of games and modes that can keep you entertained as well. The technology play is evident and firmly cements the fact that while Tesla might be an iconoclastic automaker, it can definitely be referred to as a tech company as well. After all, Tesla excels at making software, they build their own charging stations, sell solar panels and batteries!

At the recently concluded India Today Conclave 2021, Minister for Road Transport & Highways Nitin Gadkari said Tesla must set up operations in India. He also mentioned it should price its vehicles at Rs 35 lakh, which would prove to be a heavily discounted selling price, given that’s nearly how much an entry level Model 3 costs in the US.

Elon Musk has been vocal about his desire to launch the cars in India, but has raised concerns about the exorbitantly high import duties in India. He tweeted, “We want to do so, but import duties are the highest in the world by far of any large country!" Realistically speaking, if the government doesn’t lower the import tax on EVs, the

Also read: ‘Market value just not a multiple of current earnings’, says Mahindra on Musk’s $243B net worth

According to reports, Tesla has asked the Indian government to reduce the import duty from the current 60-100 per cent to 40 per cent for its entry into India.

The Indian government is keen on Tesla manufacturing its vehicles in India instead of importing variants produced in China. Gadkari said, “We have asked Tesla to bring in its technology and expertise to us and help build an eco-system in India, instead of bringing in vehicles from China. Our government will help in every possible way, considering India is a huge market and there is a demand for electric vehicles as well.”

A couple of shortcomings for the Model 3 in India, as of now, are clearly the lack of charging infrastructure and the abysmally low ground clearance. From our experience, a full charge was more than sufficient for a day of extensive testing. A range of over 500 km can go a long way in mitigating the traditional ‘range anxiety’ that comes with an electric car.

But, unless the company and the government plan an extensive supercharging network in the country before its official launch, standard wall outlet charging might test the patience of Tesla owners in India. The car we tested took between 6-8 hours to charge on a standard wall socket. Tesla Model 3 owners in the US would’ve managed to get a fully charged battery in less than 30 minutes using a supercharging port.

Whilst testing the Model 3 in the heart of Bengaluru, we had to be very careful with speed breakers and potholes, but the car really came into its own on the highway. Owing to the silent cabin and electric motor, it was tough to gauge if the car was actually on or off. In fact, it’s only after flooring the pedal that you’re thrust back into the seat with all that force, a timely reminder that you’re in a car that can go from zero to 100 kmph in less than 5 seconds.

That’s how you know you’re driving a (silent) beast of vehicle. The rear seat doesn’t offer the most legroom for tall people but, the absence of a transmission tunnel ensures a third person can fit comfortably in the middle. While the glass roof gives the car a very spacious look on the inside, it can get really hot on longer trips in the day. But, this isn’t an India specific problem. Just like the world’s most valuable tech company from Cupertino, Tesla too offers a solution in the form of a Model 3 glass roof sunshade- a premium accessory to be purchased additionally, of course!

All in all, the Model 3 passed most of our tests with flying colours. But, it will require a few adaptive tweaks when it officially arrives on Indian shores. Low ground clearance, a hefty price tag and the lack of supercharging aside, the Tesla Model 3 is all set to chart its own path in India.