Sales of the MSIL's small cars, including, Alto and WagonR, increased by 5.2 per cent to 37,595. The compact segment, comprising Swift, Estilo, Ritz, Dzire and recently launched Baleno, saw a 37.7 per cent surge in sales to 51,048 units during the last month. 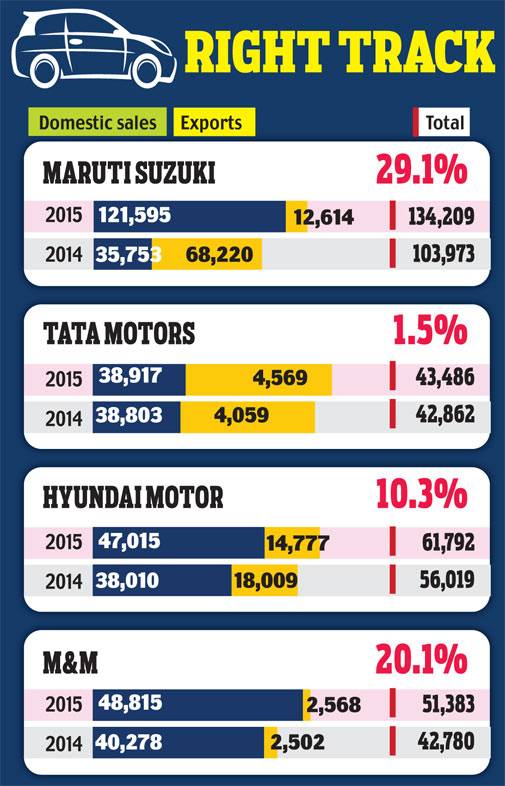 HMIL also saw its highest-ever monthly domestic sales at 47,015 units during the month compared with 38,010 units in October 2014, up 23.7 per cent. "Hyundai sales of 47,015 units are an alltime high with Grand i10 selling 14,079 units and continued strong performance of modern premium brands Creta and Elite i20/Active," senior vice-president (sales and marketing) Rakesh Srivastava said.

"The festive demand has led to a strong growth for HCIL during October, wherein we recorded our highest monthly sales of this fiscal year," HCIL senior vice-president (marketing and sales) Jnaneswar Sen said.

"We are happy with our performance during October 2015, which has witnessed a positive growth of 20 per cent backed by excellent response garnered from the recently launched TUV300 as well as other brands such as XUV500, Scorpio, Bolero and pickups," chief executive officer (automotive division) Pravin Shah said.