News
Auto
The dark side of India's vibrant auto industry; 1,369 injured in 4 years in trail of grave losses

The dark side of India's vibrant auto industry; 1,369 injured in 4 years in trail of grave losses

Beneath the shimmer of one of world's largest automotive industries is a sordid tale of crushed bones, lost limbs, poverty and broken dreams

"It was April 24, 2018. I lost balance and my hand went into the machine," Manmohan Bajpai recounts. "When I pulled out, I saw only bones. I held my hand and ran to security which called HR. They admitted me immediately."

They grafted skin from his thigh, and for 31 days stitched his hand to his stomach to help the skin grow. "It was tough for a while because my wife was pregnant and my father had just had a heart attack."

Bajpai doesn't blame anyone for the accident and is rather pleased with how the company took care of him. "We think positive," he says. "God saved my hand, right?" He was retained by the company where he now weighs chemicals.

Not everybody is as lucky. Sameer, all of 26, migrated from Unnao to Delhi for work when he had no other choice: his father wasn't around, his brother died of dog bite, and his sister's wedding cost four lakh rupees. His job in an ancillary unit was supposed to be the pancea of all ills. Instead it turned out to be his worst nightmare when the machine he was working on came crashing down on him crushing three fingers of his right hand. "I did not want to work on that machine. It had injured two workers already," Sameer says, describing how when he was home the contractor came and bullied him and took him to the factory. His aunt Been says she knows of companies, though thankfully not too many, who coerce their workers, at times even beat them up and not let them leave the factory.

Sameer passed out when the machine crushed his fingers. When he awoke in the hospital, in agony, he saw that the doctor was cutting his bone.

"Only when I said I was in a lot of pain did they give me injections." He says his phone was stolen from the hospital so he could not call his aunt. She got to know hours later. It took months for Sameer to learn to live without three fingers. When the company did not take him back, he found work elsewhere, sweeping floors for eight thousand rupees a month.

"I can't get married, when a girl looks at my hand, she rejects me," he says. "Who will look after my parents?" 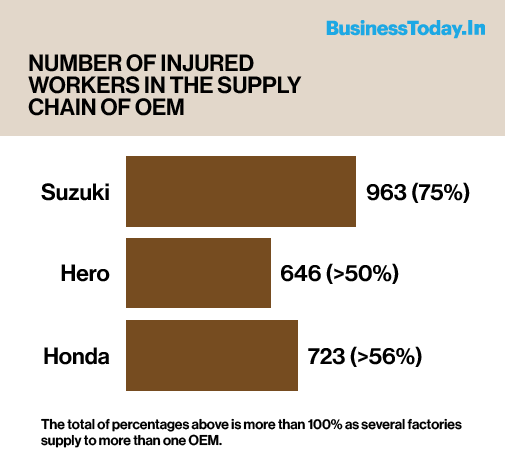 People like Manmohan and Sameer are among the hundreds of thousands of migrants that work in factories that make automotive parts in the Gurgaon-Manesar automotive hub of India. The belt that starts from the outskirts of Delhi and stretches upto 80 kilometers into Dharuhera has over 200 automotive units and collectively accounts for 40 percent of all passenger vehicles and two wheelers produced in the country.

"This is the soft underbelly of the automotive industry that nobody is talking about. Our original equipment manufacturers (car, bike and truck makers) are world class and have implemented global best practices in their respective factories but the same cannot be said about the hundreds of other smaller firms that supply components to them," says Sandeep Sachdeva, co-founder and CEO, Safe in India Foundation. "There is a big supply chain of tier I, II, III and IV suppliers in this industry. The lower you go in this chain, awareness of safety becomes more lax and accidents more frequent."

The numbers are mind numbing. Sachdeva has chronicled 1,369 cases of serious injuries that workers have faced so far and the number is still rising at the rate of 2 per day. Of these 548 people have lost at least a finger, 234 have lost two, 133 have lost three, 73 have lost four and 17 have lost all five. Another 150 have either lost (12), injured or fractured an arm, and 89 have either lost (20), fractured or injured a hand. A majority (87 percent) were migrants, contractual (70 percent) and below 30 years of age (66 percent). 12 percent are below 20 years in age. Unlike permanent employees, contractual workers get much less compensation and enjoy a much lax social security net. They are also invariably not part of any union.

ALSO READ: Slowdown Blues: Kiss of death for Indian auto industry as sales fall up to 40% in July

Bulk of the injuries-83 percent, happen because the machines either did not have safety sensors or they were malfunctioning. About 47 percent of the workers lacked or had poor quality of safety sensors and 52 percent of the accidents happen in only one type of machine--the power press. Ominously 48 percent of the workers felt excessive  production pressure from their supervisors, an obvious fall out of the break neck speed at which the automobile industry has grown over the last two decades in India.

"The real tragedy is that these injuries are preventable. Companies at the bottom of the value chain where most of these accidents happen operate at much lower margins and they tend to cut corners wherever possible. Safety of the workers is not top priority," Sachdeva says. " Lack of awareness is the biggest issue. Companies need to be made aware about safety mechanisms in the machines, proper training of the workers before they operate on dangerous machines and provision for safety gear. Working in a factory and on the shop-floor has occupational hazards and accidents can happen but excessively long hours under tremendous production pressure enhances the chances of an accident."

The magnitude of the malaise is much bigger. A significant part of India's manufacturing sector is unorganised with small factories dotting the lanes and bylanes of industrial clusters that do not make their way into official records.

"And the Gurgaon-Manesar belt is just one of the clusters. There are big automotive clusters in Pune, Gujarat and Chennai. Who knows how many cases occur there on a daily basis? It could be less than Haryana but it could also be more," he adds. "The fact is if you are using a car in India, you can't escape the realization that you are connected to this sordid reality."

That is a sobering thought.