As the competition in the world's second largest car market heats up, global auto firms are doing all they can to grab India's auto market attention, with new launches and future models.

Nissan's green car Leaf
Anuradha Shukla
Global auto firms are leaving no stone unturned to get to the checkered flag in the high-powered race in India's auto market . As the competition in the world's second largest car market heats up, carmakers are doing all they can to grab attention at the Auto Expo 2012 to be held in January, with new launches and future models.

Of over 60 new models to be showcased at the expo in Delhi, some of the major attractions will be Nissan's Leaf, Volkswagen's Beetle, the new sports utility vehicles (SUVs) from the M&M-Ssangyong joint venture, Ford EcoSport, new Hyundai Sonata Transform, Maruti Ertiga and concept cars from Hyundai, Maruti and Mercedes. 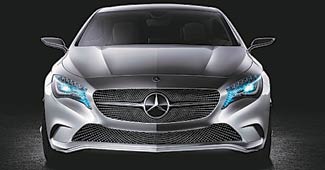 Mercedes-Benz concept-A-Class
The much-awaited Nissan Leaf will be launched at the expo. Mahindra & Mahindra (M&M) will showcase its Korean subsidiary Ssangyong's vehicles for the first time in India - over a year after the $463 million (about Rs 2,105 crore) acquisition of the firm.

M&M said both the Rexton and Korando E, which are slated to be launched in India shortly, will be showcased. M&M will also unveil an electric variant of its sedan Verito and electric car Mahindra Reva NXR. 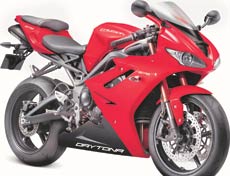 UK's Triumph will showcase super bike Daytona 675.
Ford will showcase 12 vehicles, including the new EcoSport that it plans to introduce in India in the near future. EcoSport will be the second of eight products, with the first one being the new Ford Fiesta, that the firm plans to bring to India by mid-decade, Ford India said.

Luxury car maker Mercedes-Benz will showcase 10 new models, including the SLS AMG Roadster, which it plans to launch at the expo. It will also display the concept A-Class, the SLS GT3 and the DTM car.

Rival BMW is also going to launch its luxury small car series Mini Cooper, while Audi India plans to unveil the S6 sedan and the Q3 SUV , which will be launched in India next year.

Not to be left behind, German automaker Volkswagen will showcase the third generation of its iconic car - the 21st century Beetle. Toyota plans to use this opportunity to unveil its new line-up of cars that are set to make their debut during the auto show, including the new Toyota Innova, the new Camry sedan and the new Toyota Fortuner.