There is a battle for supremacy brewing in the Rs 63,000 crore ($9 bn) domestic tyre industry in India. Gurugram based Apollo Tyres has laid down the gauntlet to long time market leader MRF Tyres Ltd and has set a target to overtake it and become India's largest tyre maker by March 2021.

In 2018-19, MRF had revenues of Rs 15,837 crore while Apollo tyres was behind at Rs 12,354 crore. Apollo has however led the domestic tyre market in terms of growth in the last 3 years with a CAGR of 12.6%. MRF on the other hand has witnessed a decline of 6.6% during the period. The tyre industry is split in two halves--Original Equipment segment of those that are supplied to vehicle manufacturers and comes fitted with any new vehicles, and aftermarket that are those bought by consumers directly from the market place as replacement to the original ones. Typically the aftermarket segment accounts for over 55 percent of volumes but it varies from category to category. Individual companies also have their strengths and weaknesses embedded in this matrix that determines their standing in the industry. 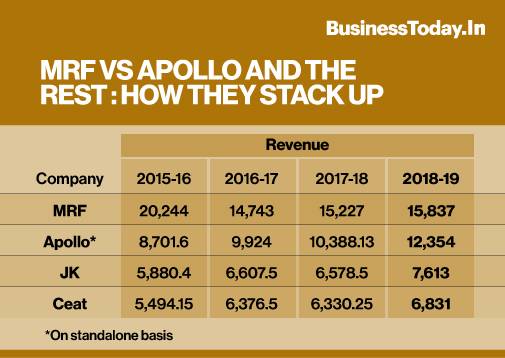 "We are already market leaders in the CV segment, which is the largest tyre segment in India in terms of revenues. We also have a lead in the passenger vehicle OE segment," says Satish Sharma, President, Asia Pacific Middle East and Africa for Apollo Tyres. "It is in the after market segment, where MRF has a lead. They are also leaders in the two wheeler space which we have entered a few years back. We want to challenge them in the PV aftermarket segment and become a leader. We also aim to expand our share in the two wheeler space. In the span of next two years, by March 2021, we should be in a position to be ahead of them in overall revenues in India."

"Even now, in a like to like comparison, we are ahead. MRF gets between Rs 4,500-5,000 crore from their two wheeler business which accounts for just a few hundred crores for us. Discount that and we are already ahead of them," he added. "We have won the OE game. We now want to win the other one," Sharma says.

At the same time, it has clear leadership in both categories - OE and aftermarket, in the commercial vehicle segment. Overall, it has a share of around 30 percent in CV tyres. 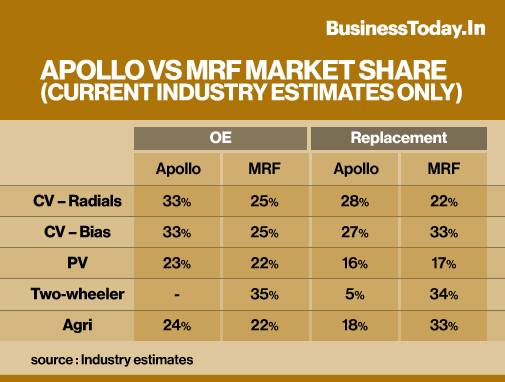 The tyre maker believes it will be able to reinforce its leadership position in that segment further with the onset of BS VI emission norms from April 1, 2020, which will turn the attention of manufacturers towards more efficient radial tyres against traditional bias tyres.

"We have led the radialisation of this segment in the country. BS VI emission norms will aid this further which will be an advantage for us," Sharma said. "MRF is relatively weak here and they are playing catch up. Currently radial tyres account for 70 percent of the OEM business and 50 percent of the aftermarket business. When BS VI norms come into play, the OEM segment will be completely radialised. We will benefit from that."

The strength of the aftermarket segment is what has insulated the tyre industry from the protracted slowdown in the automotive sector in India. Tyre companies have continued to invest in new technologies and capacity unlike other segments of the industry that has started to defer investment plans.

"There is some impact and the performance of the industry in fiscal 2020 will be muted. But you will not witness the kind of declines that you are seeing in other parts of the industry," Sharma said. "I also believe we are seeing the worst in September. It will turn the corner next month. There will be some uptick in demand during the festive season. The liquidity situation is improving. There will be no bull run, but there will be a slow and long recovery."

"Following two strong years of growth (12% and 14% in FY18 and FY19 respectively), tyre industry revenue is estimated to grow at a lower rate of 3-4% in FY20 affected by modest growth in OE tyre demand on the back of sluggish auto demand and expected moderation in tyre exports," says K Srikumar, Vice President and Co-Head, Corporate Ratings, ICRA Ltd.