Vehicle sales fall 5%; except tractors & PV, all other segments in red, says FADA

The auto dealers’ body pointed out that overall retail sales have dropped by 13.5 per cent.

Total vehicle sales in the country have fallen by more than 5 per cent in September, as compared to the figures for the same month in 2019, said the Federation of Automobile Dealers Associations (FADA), on Thursday.

The auto dealers' body, in a statement, pointed out that overall retail sales have dropped by 13.5 per cent. The total sales across categories decreased by 5.27 per cent to 12,96,257 units in September as against 13,68,307 units in the same month last year. 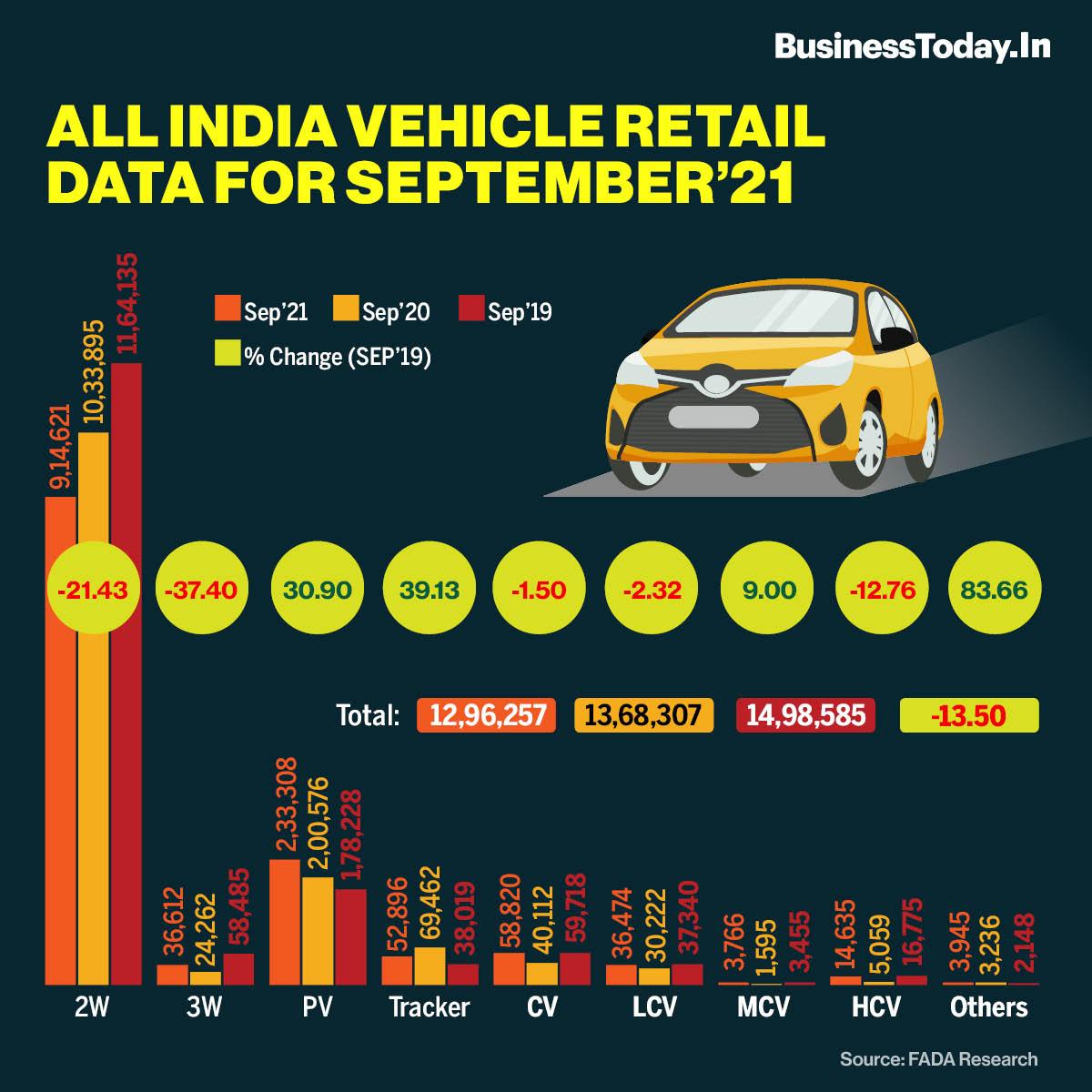 “Auto retail in the month of September has taken a pause as overall sales were down by 5 per cent. During the first half of this financial year, while the overall retails were up by 35 per cent, the same was down by 29 per cent when compared to 2019, a pre-Covid-19 year," Vinkesh Gulati, President, FADA, said.

Gulati also added that except tractors --- which grew by 19 per cent ---- and passenger vehicles (PV), the numbers for which have almost reached pre-pandemic levels, all other segments were in red.

On the other hand, commercial vehicles (CV) saw 47 per cent higher sales last month as compared to the previous year. CV sales surged to 58,820 units in September 2021 against 40,112 units in the same period last year.

"The CV segment is finally showing greater strength as all sub-categories continue to grow YoY. MCV for the first time also grows above pre-Covid-19 month of September 2019," Gulati said.

Two-wheeler sales slipped 11.54 per cent to 914,621 units in September 2021, compared to 10,33,895 units in the year-ago period. "The two-wheeler category continues to play spoilsport as entry-level segment is yet to witness healthy growth. This segment’s performance is now becoming critical for the overall 2W to come back on the path of recovery as dealer inventory rises to 30-35 days in anticipation of a good festive," added Gulati.

On a YoY basis, three-wheeler sales saw a rise of 50.90 per cent to 36,612 units last month from 24,262 units in the year-ago period. "The three-wheeler segment is now showing clear signs of tactical shift from ICE to EVs as the ratio has hit a 60:40 split. With offices and educational institutions slowly opening up, electrification of 3W’s will gather a greater momentum in months to come," said the FADA president.

Gulati, while commenting on the near-term industry outlook, pointed out that the global semiconductor crisis is continuing to create nuisance in the automotive industry. "As we enter the core of this year’s festive season, the full-blown semiconductor crises continue to create hindrance in PV sales as vehicle inventory at [the] dealers end dip to record lows of 15-20 days during the current fiscal. With high demand in this segment, long waiting period continues to frustrate," he said.