BT Buzz: How to vaccinate against Bitcoin fever Regulated or not. Clarity on taxation or not. Indians are taking big slices of bitcoin, and how! Cryptocurrency exchanges that facilitate rupee-bitcoin transactions have seen a surge in number of users on their platform. Zebpay, one of the oldest exchanges having operations in India, has seen customer base increase by over four times from April to December. As many as 1,40,298 new users registered on its platform between March and December while app downloads stood at 3,24,581 during the same period. 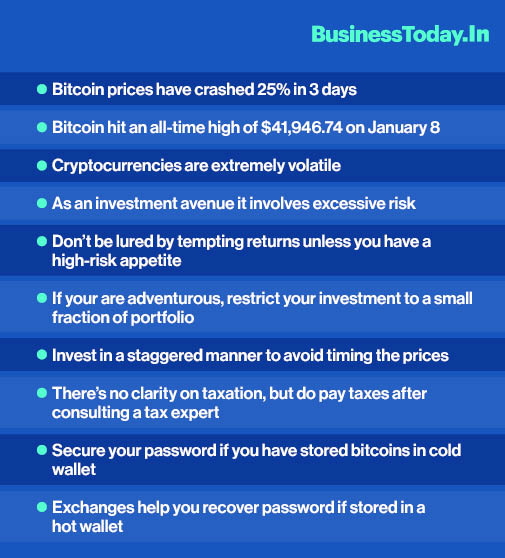 Why do investors value bitcoin

Bitcoin is a virtual currency that doesn't involve a sovereign authority but a decentralised peer-to-peer network to facilitate payments. But more than a payment method, bitcoins are treated as an investment avenue. Being a scarce asset (its creator Satoshi Nakamoto has designed it in a way that it will always have a maximum supply of 21,000,000), people world over treat it as a digital gold. Besides, countries like Japan and the USA, among others, have allowed citizens to transact in bitcoins for goods and services. Bitcoin investors believe the currency will find global acceptance as an alternative to the US dollar -- slowly and gradually. This is what keeps the long-term sentiment positive in cryptocurrencies. However, the currency's volatile nature works against it becoming a mainstream currency.

"Winds are blowing in our direction. There are more tailwinds than headwinds. Our interactions with politicians and company CEOs give us a sense that they are much more favourable to bitcoins now. Earlier they called it a bubble and a currency for scamsters and hackers. But no longer. One of the main reasons why prices have rallied this time is because large corporations have invested in bitcoin - a signal of institutional confidence in the currency," says ZebPay CEO Rahul Pagidipati.

Should you buy bitcoins?

In Indian currency, bitcoins are trading above Rs 25 lakh. Interestingly, on Zebpay and on many other exchanges, you can buy units of bitcoins (called satoshis) for as low as Rs 100. But is investment in bitcoin wise? Bitcoins are not regulated in India. If something goes wrong, there will be no grievance redressal mechanism where you can lodge a complaint. Besides, bitcoin prices are highly volatile and rise and fall on speculative reasons mostly.

"Stick to simple rules. First, if you don't understand it, don't buy it. If you understand crypto well and want to get involved make sure you understand the risk and size your crypto exposure appropriately. Good recent past returns in itself are not a good justification to buy an asset, there has to be an asset allocation and risk management framework around it," says Gaurav Rastogi, CEO at Kuvera.

If you do have to invest taking a staggered approach will be advisable, that is, buying some units of bitcoins periodically.

How are bitcoins taxed?

The tax authorities have not really spelled out taxation rules around bitcoins. "According to regular income tax parlance, the tax implications on cryptocurrencies should depend on the investment's nature, whether held as a currency or property.  Gain from the sale of bitcoin may be taxed as business income if traded frequently or taxed as capital gains if held for the purpose of investment," says Archit Gupta, founder & CEO, Cleartax.

"If regarded as business income, then the gains will be taxed as per the applicable slab rate. However, if you are an investor in bitcoin, taxation may be similar to that of gains taxed as capital gains. Which means if you redeem your investments before 3 years, you may pay short term capital gains as per your current tax slab. If redemption is after 3 years, any redemption may be treated as long term capital gain and could be taxed at 20% with indexation. However, each case has to be looked at separately and it is best to consult a tax expert for your personal situation," he adds.

So, even though there is no clarity on taxation by the government, it doesn't mean you can evade taxes. "As per the Income Tax Act, all incomes are liable to income tax except explicitly exempt income. Remember that tax authorities have the powers to summon details of all the transactions from any agencies for the purpose of assessing the income and calculating income tax."

Your bitcoins wallets could be hacked. While known exchanges do put checks and balances to protect your bitcoins against it, some investors keep their cryptocurrencies in cold wallets, that is, printing them and storing them physically instead of maintaining a hot wallet on the exchange. While both the options are fine, the trouble with cold wallet is if something happens to the investor and no one else is aware of the password, there is no way to recover the key. The investments will be gone forever with the person.

"If you have a wallet with us, and you lose your password, we help you recover it. We also have a nominee form, so if something happens to you, the nominee will be provided with the password," says Pagidipati.

"It's good to keep some money in cold storage, but only after you have reached certain level of coins and understanding. Cold storage is technical," he adds.

BT Buzz: How COVID vaccine development was shrunk from 10 years to just 1