Policy watchers think that the US has kept its powder dry. If India does not step back now, more retaliation could follow. In fact, it could end up damaging its most successful exports story - IT and ITeS

The United States, last week, said it would end India's preferential trade status, one that allowed duty-free exports worth about $5.6 billion. The move is a retaliation -  the US stated that India had not assured that it would provide "equitable and reasonable access" to its markets.

American companies in India have been resisting, among others, India's stance on data localisation. The draft National e-commerce Policy has many areas of concern. Multinationals, of course, have concerns around regulation of data flows but also around regulatory overreach on advertising and more disclosures. The draft policy, for instance, states that "advertising charges in e-commerce must be regulated, especially for small enterprises and start-ups" and that "it is important for the government to reserve its right to seek disclosure of source code and algorithms".

Technology policy consultant Prasanto K Roy says that India has been testing the protectionism waters for a year now, and quite boldly, sharply tweaking e-commerce and data governance laws. "With data localisation, it has hit out at global payments companies via the regulator (RBI) which has taken an extreme position, demanding full localisation and disallowing even mirroring of financial data, while not stating clearly the purpose or outcome (thus depriving the industry of a chance to come up with suggestions or alternatives) - and now, virtually forcing companies to process Indian financial data on-soil (i.e. in India). This is particularly worrying from the point of view of our $137 billion IT-BPM exports industry, a quarter of which depends on processing US financial data," he says.

"Given Trump's penchant for outsize retaliation via random morning tweets, it isn't unthinkable that the US government could also clamp down on processing US financial data outside the US, or even, specifically, block processing in India. Yes, that would hurt US companies, but not as much as it would hurt our IT-BPM industry," Roy says and adds that "this heady cocktail of protectionism and nationalism, backed by large Indian corporates for business reasons, is a slippery slope for a country that had chosen a leadership role in the global digital economy".

Kazim Rizvi, Founding Editor of The Dialogue, a think tank, says that the Indian market continues to be very lucrative for US companies. Therefore, the US government could apply pressure through various means as much as possible instead of a direct large-scale retaliation. Nevertheless, in this age of protectionism and anti-globalisation, it could get difficult for Indian software companies to get American market access, going forward.

Rizvi lists many areas in the draft e-commerce policy that will be a bone of contention for American companies such as Amazon and Flipkart, now owned by Walmart. Here are two:

Cross-border data flows: Restricting the flow of data across borders can place unnecessary costs on business, he says. "It will isolate India's economic activity with the rest of the world and could also remove Indian data from global data sets, which could potentially harm India's Artificial Intelligence (AI) progress. IoT and interconnectivity is essential to realise the potential of fourth industrial revolution and the transformation it will bring to public services, such as transportation, healthcare, education, financial services etc," he says.

Data localisation, he stresses, will bring down innovation and quality of service, increase cost and lower competitiveness of Indian firms globally. "The trend towards micro-services in service architecture and increasing distribution of data processing means that data localisation restrictions could result in companies choosing not to serve the Indian market or significantly reducing functionality of their services. Free flow of data across borders is paramount to keep improving the quality of digital products and services." 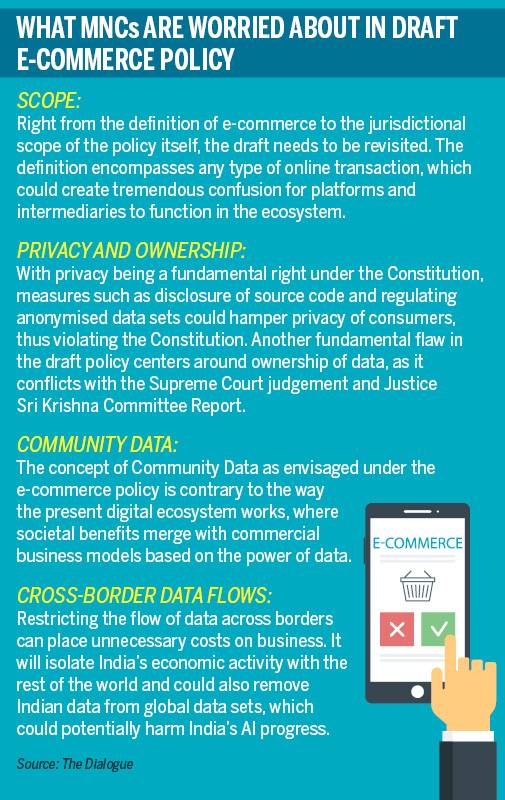 India's hawkish approach to data localisation has to do with its thinking on digital sovereignty. India does not want to become a digital colony of either American or Chinese companies. Not just India, even Europe is increasingly worried about the powers of GAFA - Google, Apple, Facebook and Amazon - the four American companies that deal with personal data. An Indian policy expert, who advocates localisation, recently explained to Business Today: "The world is now seeing weaponisation of the payments system.

After 9/11, everyone started monitoring the payments system for terror. In the last 2-3 years, payments have become an actual tool for asserting power. Traditionally, the source of power was military. Then it was economic. Today, there is a third source, the digital platforms. GPS, payment systems, identity systems. The digital platforms can get weaponised. So, every country has to fight for digital sovereignty. If India's payments system is controlled by others, India is controlled by others. Any sanctions against India, in the future, could be around payments. Nobody likes the change. Therefore, you see an organised effort by all the US-affiliated trade bodies to thwart it. The US has a vested interest in making us a digital colony."

Access and community data: The National E-Commerce Policy seeks sharing of anonymised community data or data that is collected by IoT devices installed in public spaces like traffic signals or automated entry gates.

Kazim Rizvi thinks the concept of Community Data as envisaged under the draft policy is contrary to the way the present digital ecosystem works, where societal benefits merge with commercial business models based on the power of data. "To ask for insights without having made the investments into the technology, and without providing the services, would set a dangerous precedent for India in the future.

If an organisation believes that other entities may have access to their data sets and insights developed over years of technological investment, it would send a discouraging and demotivating message that may hamper the spirit of innovation and competitiveness in the Indian market. It will be counter-productive for India's social and economic needs," he adds.