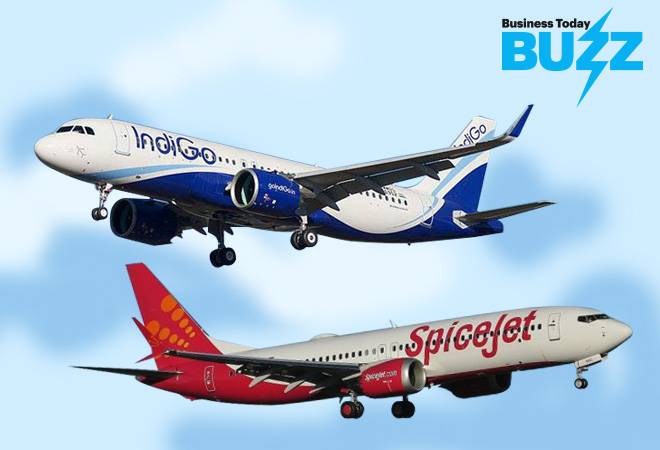 The March quarter results paint a rosy picture for the Indian aviation sector, but the good times are not going to last long.

The recent quarterly results of aviation leaders IndiGo and SpiceJet highlight significant improvement in their profitability. Market leader IndiGo, which now controls 49.9 per cent of the market, has posted net profit of Rs 589.6 crore for the fourth quarter compared to Rs 117.6 crore in the corresponding quarter in 2017/18. SpiceJet too reported a 22 per cent jump in net profit to Rs 56.3 crore in the March quarter compared to Rs 46.2 crore in the same quarter last year.

Both the airlines have benefitted from subdued crude oil prices, stable rupee-dollar exchange rate, and the grounding of Jet Airways. "Jet Airways' cessation of services helped our revenue performance in the last week of February and the whole of March. Overall for the quarter, we think that the Jet Airways effectively increased our unit revenue by 3-4 per cent," said IndiGo CEO Ronojoy Dutta in an analyst call to discuss fourth quarter results.

The fourth quarter results also mark the reversal of downcycle in the domestic aviation, at least for the time being. But, the good times are not going to last long with the kind of new capacity expected to be added in the market over the next one year.

IndiGo, for instance, has plans to increase capacity by 30 per cent in the 2019/20, which means that the airline will add nearly 65 aircraft to its existing fleet of 217. Similarly, SpiceJet has plans to induct 35 planes over the course of 2019/20, which is in addition to 25 planes that the airline has added in the past two months (April and May) that has taken its fleet size to 100. The new capacity induction from SpiceJet in 2019/20 is expected to be 80 per cent, the carrier has said.

"The sector is heading towards a 2011/12-kind of profit-less growth situation, which led to the death of Kingfisher Airlines. There is just enough demand at the moment for airlines to fill up their seats. The capacity addition plans of IndiGo and SpiceJet are unsustainable. I expect SpiceJet and IndiGo to declare good results for at least one more quarter, and from the second quarter onwards, they will be in the red. From the second quarter of 2019/20, their yields will be under pressure, which will increase with the growing capacity addition," says Devesh Agarwal, an aviation blogger.

"By the end of 2020, one more airline is likely to fail. The robust capacity additions have spoiled the party for Jet, and it will continue to hurt those in a weaker position. The games being played in the aviation sector is also going to affect the Air India divestment (as and when it happens) and Jet's sale process. Any potential buyer would look at these dirty tricks before taking a call," says an aviation consultant.

The Q4 results might paint a rosy picture but the full-year results are quite the opposite. SpiceJet reported net loss of Rs 316 crore in 2018/19 whereas IndiGo's net profits dropped 93 per cent to Rs 156.1 crore than a year ago.

In 2018/19, IndiGo's costs were higher than revenues in the core business. For instance, the airline's CASK (cost per available seat kilometer) was Rs 3.59, and RASK (revenue per available seat kilometer) was Rs 3.57. That means, it lost 2 paisa per flown seat per kilometer in each flight. To put it simply, in a 180-seater Airbus A320ceo flight from Delhi to Mumbai, the airline lost over Rs 4,100. Of course, the airline reported profits for the full financial year on the back of revenues from ancillary and other sources.

"If the Jet had not been grounded, IndiGo would have lost anywhere between Rs 650 crore and Rs 800 crore," says an industry insider who didn't wish to be quoted. 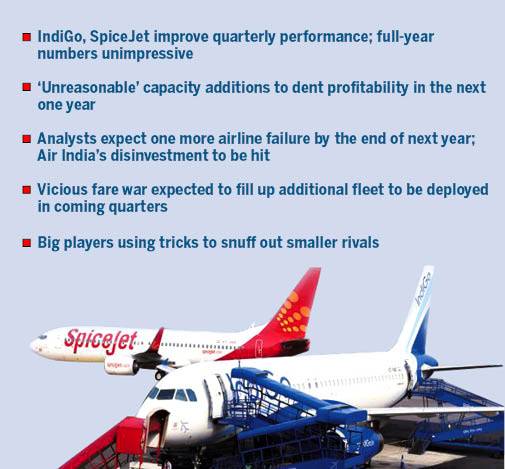 Since Jet's grounding last month, the fleet size of Indian aviation has come down drastically to about 569 from 638 at the beginning of the year. The scaled down fleet, as veterans point out, is more realistic than a year ago when the airlines across the board went into a fare war to compensate for higher seat additions. More seats at lesser prices created an artificial demand where people switched to air travel - from the other modes of transport - at a marginal incremental cost.

The artificially low fares stimulated the demand, and the growth rates for the past three years stood at 18.6 per cent in 2018, 17.3 per cent in 2017 and 23.18 per cent in 2016 - the highest that the sector has ever seen. Until last year, the smaller airlines were blaming IndiGo for suppressing fares; IndiGo, on the other hand, maintained that it had raised fares for a brief period but the rivals didn't follow suit. With the fall of Jet, the passenger growth has now slipped to low single digits. The April growth numbers - 2.53 per cent year-on-year - were lowest in five years.

ALSO READ:BT Buzz: With or without Modi, 'achche din' ahead for Ayushman Bharat

A part of the passenger growth hysteria was fuelled by the government, which has been ambitious about its targets of making flying affordable for the masses. The government's aim to achieve 1 billion trips per year in next 15-20 years translates into annual passenger growth of 10.3-14 per cent over the same period.

Jet's fall has resulted in a drop in excess capacity, and fares have gone up in most cases. SpiceJet, in its latest quarterly results, reported 11 per cent rise in average fares in January-to-March period. "The moment fares are increased, people stop flying. Nearly 70 per cent of the current demand is elastic. The true growth of the sector is not 20 per cent, the current growth level seems more real," says an aviation consultant.

Typically, the aviation sector grows at two times the growth of GDP. If the Indian GDP growth has slowed down to 6 per cent, the comfortable growth rate for aviation is 10-12 per cent. In a price-sensitive market like India, the ideal growth rate is 1.8 times of the GDP growth.

High capacity additions by IndiGo and SpiceJet would start to put pressure on the fares again. And there's no stopping them. IndiGo is sitting on a cash pile of Rs 15,308.1 crore (including restricted cash) as on March 2019 as against debt of Rs 2,429.2 crore.

Every effort is being made by large players to kill competition. Experts say that both IndiGo and SpiceJet have been focussing on government's UDAN (Ude Desh Ka Aam Naagrik) scheme to snuff out smaller rivals. These airlines have aggressively bid for routes under UDAN, and more importantly, they haven't sought VGF (viability gap funding) from the government for some of routes awarded to them.

The idea is to deny airport slots to the rivals. Airport slots are one of the most precious resources for airlines. Suppose, if an airline is bidding for Delhi-Pathankot route, it's primarily done to grab landing slot in Delhi even if the airline knows that this route is unlikely to be profitable for them. "It's resource hogging and resource denial. A landing slot gained is a slot denied to the competition. IndiGo is using its cash resources to bleed opponents with unsustainable losses," says a sector consultant.

Almost all airlines have feasted on the Jet's failure - gaining market share in proportion of their size. However, with the vicious fare war lurking around the corner, the sector is staring at its toughest time ever.