While the sector struggles to recover amid liquidity squeeze after non-banking financial companies such as IL&FS and DHFL defaulted on loan payments, the recent directive by NHB has dealt another blow

As per a report by Liases Foras, sales across Tier-I cities grew by 5 per cent during FY19 as compared to FY18

Troubles for the real estate sector are far from getting over. While the sector struggles to recover amid liquidity squeeze after non-banking financial companies such as IL&FS and DHFL defaulted on loan payments, the recent directive by National Housing Bank (NHB) has dealt another blow. NHB has directed Housing Finance Companies (HFCs) to refrain from lending under subvention schemes. The move, experts believe, will hit sales in the sector where green shoots of recovery had just appeared.

"Sales had recovered over the past one year. New launches are driving around 40 per cent of sales, of which 50 per cent have been happening through these schemes. Hence, 20-25 per cent of sales are expected to get impacted by the decision," says Pankaj Kapoor, MD Liases Foras. 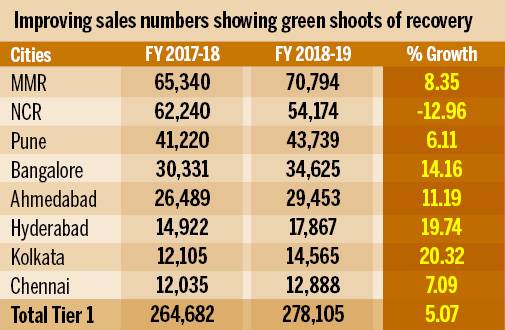 As per a report by Liases Foras, sales across Tier-I cities grew by 5 per cent during FY19 as compared to FY18. MMR has posted highest sales of 70,794 units (25.5 per cent of total sales in Tier-I cities) followed by NCR with 54,174 units contributing 19.5 per cent to total sales. There are three parties involved in the scheme - a lender, a developer and a homebuyer. The homebuyer books a flat by paying a sum of 5-20 per cent of the cost of the flat upfront. The rest is paid by the lender to the developer as the construction progresses but as a loan to the buyer. The developer takes care of pre-equated monthly instalments (EMIs) for the time period as agreed in the agreement. The lender generally disburses the loan amount after deducting EMIs.

Such schemes provide a win-win solution to both the buyer as well as the developer. These schemes are affordable for buyers, as neither do they have to bear the burden of rent nor EMIs. Builders, meanwhile, receive funding at a lower cost.

"Under subvention schemes, developers get to access funds at home loan interest rate, which generally hovers in the range of 8-10 per cent. It is far cheaper than the cost of capital otherwise. Raising money from the debt market costs 13-18 per cent, depending on the profile of developer and risk-profile of the proposition," says Ashutosh Kashyap, Associate Director, Valuation and Advisory Services at Colliers International India.

One of issues with the scheme was related to upfront disbursal of loan to developers by banks and HFCs. This left the scope for misuse of funds by developer as the risk of default lied with the buyer since the loan was disbursed in his name.  However in 2013, RBI directed banks to make disbursal construction-linked. HFCs were also advised to pay back money as per various stages of construction.

Gulam Zia, Executive Director- Valuation & Advisory, Retail and Hospitality, Knight Frank India, says, "Now the RBI, the new regulator (for HFCs), has cracked the whip to make it a level-playing field for all."

In its circular, NHB stated that it continues to receive several complaints. However, it did not clarify about the nature of complaints. Experts point out that developers might have misused profiles of buyers to get access to loan.

"The fraud may have happened on account of non-servicing of interest by developers or non-delivery of the house within the stipulated time defined in subvention. This has been putting the buyer at a larger credit risk," says Kashyap of Colliers International India.

Some cases may involve misuse of funds.

"Subvention schemes offered by fly-by-night developers often had fine print, which escaped buyers and put them at a disadvantage. The NHB may also be alluding to cases where funds collected for one project were diverted to another or siphoned off entirely," says Anuj Puri, Chairman, ANAROCK Property Consultants. Kapoor of Liases Foras believes that the timing is not right. "The NHB directive should have come at least five years earlier when investors were benefiting from such schemes. Now investors are mostly out of market, as prices are not going up. Current market is a buyer's market and such a move will adversely impact the recovery of the sector," he said.

The situation will get worse for developers who are grappling with the liquidity squeeze caused by the NBFC crisis.

"For developers, there could not have been a bad time for such a move.  For the sector already grappling with liquidity crunch in the wake of NBFC crisis and subdued primary sales for a prolonged period, the move will further inhibit sales, as well as close the avenue to access low cost funds that were available via subvention route," says Kashyap.

"In recent times, the subvention schemes had been extended to even ready properties where unsold inventory was piling up. The new ruling will make a dent on this side of the market as well," he added.

Project deliveries may also take a hit due to the credit crunch. "This move will slow down sales further, impact project delivery timelines and developers' ability to repay their loans," says Kalpesh Mehta, Founder, Tribeca Developers. "While we respect NHB's move to control fraud and illegal dealings, the implementation of this directive is absolutely not conducive to the environment the real estate market is facing today, both in terms of developers and home buyers," says Nabil Patel, Director, DB Realty.

There is lack of clarity on whether existing borrowers will see an impact. "We are still awaiting clarity on the retrospective applicability of this move," says Puri. Kashyap noted that while the circular applies to sanctioned projects, clarity is yet to emerge on the way ahead for disbursals to projects midway into this scheme. "However, it is categorically clear that the ban applies to projects where sanctions have happened and disbursal is yet to happen," says Kashyap.

Experts believe that the move will provide long-term benefits. It shows the futuristic vision of Indian real estate as a transparent, predictable and attractive marketplace for both end-users and investors.

"Taking a broader view, this announcement falls in line with the incumbent government's philosophy of short-term pain being an acceptable trade-off for long-term gain. Over the long-term, the industry will definitely benefit from this move, which protects interests of buyers by eliminating yet another level of risk," says Puri.

"The circular desisting NHBs to lend in subventions schemes in structural terms is a good step intended towards safeguarding interests of homebuyers insulating them from possible misuse by developers as cited by the NHB," points out Kashyap.