"No funds whatsoever were provided by Mukesh Ambani to Anil Ambani in a personal capacity, nor was there any gift," says Anil Ambani's spokesperson

Billionaire Mukesh Ambani did not provide any financial support to his younger brother Anil Ambani to save him from going to jail in the Ericsson dues case, which settled in March 2019. Instead, Anil Ambani's troubled firm Reliance Communications (RCom) paid Ericsson dues by raising around Rs 460 crore by leasing corporate assets to a group company of Mukesh Ambani's Reliance Industries, according to legal documents submitted by Anil Ambani in UK Court in the financial dispute with Chinese banks.

In response to a BusinessToday.In query, a spokesperson for Anil Ambani says: "The Ericsson matter pertained to a corporate liability, and funds to meet the obligation were raised through a corporate transaction by leasing out corporate assets. No funds whatsoever were provided by Mukesh Ambani to Anil Ambani in a personal capacity, nor was there any gift." 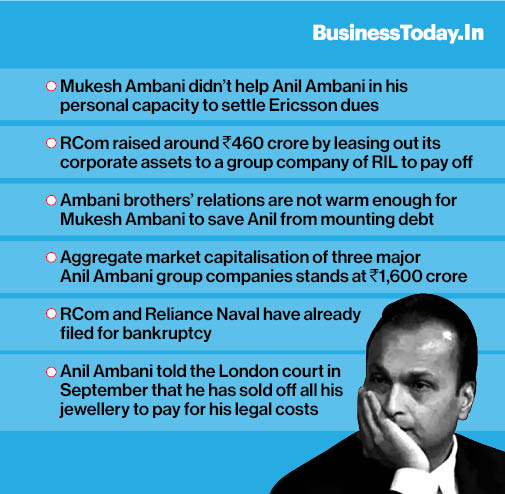 It is not clear which asset was leased out. An email sent to Reliance Industries didn't elicit any response.

On March 18, 2019, Reliance Communications (RCom) issued a press release, saying it paid Rs 458.77 crore to Swedish telecom equipment maker, clearing the outstanding dues and fending off a possible jail term for its Chairman Anil Ambani. In the statement Anil Ambani said, "My sincere and heartfelt thanks to my respected elder brother, Mukesh, and Nita, for standing by me during these trying times, and demonstrating the importance of staying true to our strong family values by extending this timely support. I and my family are grateful we have moved beyond the past, and are deeply touched with this gesture."

But a year and a half later, Anil Ambani's The Reliance Group spokesperson clarifies that RCom's press release dated 18 March 2019 only captured the gratitude expressed by Anil Ambani as Chairman of RCom, to the Chairman and Director of Reliance Industries Limited, Mukesh and Nita Ambani, respectively.

Sources in both the groups say relations between Ambani brothers are not warm enough for the now vastly rich elder Ambani to save Anil financially from mounting debt.  Two of Anil Ambani's companies--- RCom and Reliance Naval and Engineering Ltd--- are now under insolvency process. Mukesh Ambani's Reliance Jio is one of the bidders for a part of RCom's assets. The other major companies of Anil Ambani-- Reliance Infrastructure, Reliance Power and Reliance Capital--are debt-ridden and are together valued just Rs 1,600 crore in the stock market.

YES Bank recently issued a notice of possession to Ambani's headquarters at Santacruz and two other offices in South Mumbai for its dues. BT reported earlier that The Reliance Group of Anil Ambani is likely to shift corporate headquarters and chairman's office back to Reliance Centre at Ballard Estate in South Mumbai. In a major relief for Anil Ambani, the Delhi High Court in an interim order in August stayed insolvency proceedings against him and directed him not to dispose his assets until further order.

Once the world's sixth-richest person with wealth of $42 billion, Anil Ambani was ordered by a UK court in May to pay $716 million (Rs 5,276 crore) including interest and legal costs to the Industrial and Commercial Bank of China, Export-Import Bank of China and China Development Bank.  Anil Ambani told the London court in September that he had to sell off all his jewellery to pay for his legal costs and his current expenses are being borne by his wife and family. He also said that he received loans from his son.

According to Anil Ambani sources, the UK proceedings are for the liabilities of RCom, which is already under insolvency in India and the Chinese banks will get their share of payments from the sale proceeds. "The matter pertains to an alleged personal guarantee for a corporate loan availed by RCom in 2012 from the Chinese State-owned banks, and not a personal loan of Ambani," a source said.

At least some of the lenders of Anil Ambani's businesses believe that his elder brother will again bail him out. Anil Ambani and his family were at the forefront during the weddings of Mukesh Ambani's daughter Isha with Anand Piramal, and son Akash with Shloka Mehta . It was Anil Ambani who came out to receive former President late Pranab Mukherjee during Isha's wedding in December 2018.

After the demise of father Dhirubhai Ambani in 2002, Mukesh and Anil had split the Reliance empire. Family business was divided in 2005 with the mediation of mother Kokilaben Ambani. But, a series of court battles and public spats happened for the natural gas produced from Reliance Industries' asset in Krishna Godavari (KG) basin. Making it more bitter, Anil Ambani's group filed a Rs 10,000 crore defamation suit against Mukesh in 2008 for the latter's remarks in an interview.

Finally, in 2010, the Supreme Court gave the verdict in favour of Mukesh's company in the gas dispute. In May 2010, the brothers scrapped all "non-compete" agreements among their companies, allowing either group to enter sectors that had earlier been reserved for one of them. This paved the way for Mukesh Ambani's entry into telecom, launching Reliance Jio.

It was rumoured during the time that the brothers settled financially before removing the non-compete clause from their family agreement. The Ambani family partied together in December 2011 at Chorwad in Gujarat during the 80th birth anniversary celebration of late Dhirubhai Ambani.

Mukesh Ambani said in an interview at the same time, he was "happy" that they had overcome all their past issues at the family level, but added that their businesses were separate. Broadly, these statements were seen by the market as a reunion. But the launch of Jio destroyed the telecom business of Anil. In early July 2017, RCom blamed Jio directly as the reason for the financial stress in the telecom industry.

Soon, RCom started defaulting on its repayments on a debt of Rs 45,000 crore. Its asset sale failed to take off. Finally, Mukesh gave the helping hand and agreed to buy the RCom assets. Jio had announced a Rs 23,000-crore deal in December 2017 and completed the purchase of media convergence nodes and fibre for Rs 5,000 crore. But the spectrum sale got stuck after the telecom department sought bank guarantees. Ericsson went to court around the same time.