As the name suggests, the seven country bloc that includes Bangladesh, Bhutan, India, Myanmar, Nepal, Sri Lanka and Thailand is key to India's plans to strengthen its economic and trade footprint in the neighbourhood

Today Narendra Modi will swear in as the next Prime Minister of India. The leaders of six member countries of the Bay of Bengal Initiative for Multi-Sectoral Technical and Economic Cooperation or BIMSTEC (which includes India) have been invited to witness the swearing-in ceremony in Delhi. The invite is in line with India's "neighbourhood first policy", says, External Affairs ministry, a statement that perhaps reflects little about the importance India attaches to BIMSTEC at the moment.

As the name suggests, the seven country bloc that includes Bangladesh, Bhutan, India, Myanmar, Nepal, Sri Lanka and Thailand is key to India's plans to strengthen its economic and trade footprint in the neighbourhood. The two decades of BIMSTEC's existence have achieved very little, and Modi government wants to reverse this trend by bringing in a significant improvement in its economic engagement within the region, without further delay. The potential trade opportunity that beckons BIMSTEC nations seems to be as high as $250 billion, as compared to the current trade of $40.05 billion, a knowledge paper "Reinvigorating BIMSTEC" published by apex industry chamber Ficci in 2018 says. 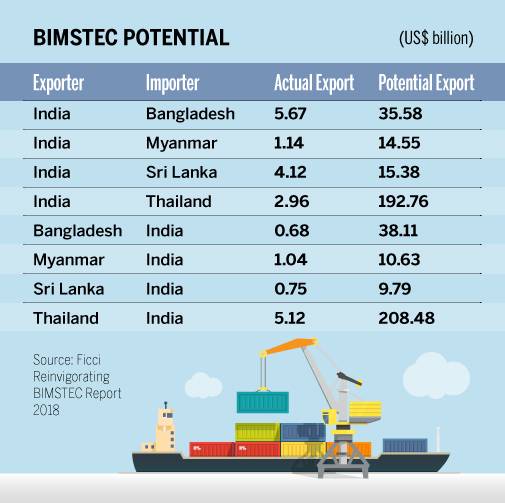 "Home to 1.5 billion people, approximately 22 per cent of the world population and with a combined GDP of $2.7 trillion, BIMSTEC carries the potential to catapult regional trade and investment to the next level and provide a framework to achieve sustainable development", comments Ficci's then-president Rashesh Shah in the report. The need to diversify India's export markets becomes even more crucial in the backdrop of growing protectionism in the country's traditional export destinations like the US.

As early as 2008, BIMSTEC members had identified over a dozen sectors including trade and investment, technology, energy, transport and communication, tourism, fisheries and agriculture as priority areas of cooperation. In 2016, Blue Economy and the Mountain Economy were also added to this list as areas such as aquaculture (both inland and coastal), hydrography, seabed mineral exploration, coastal shipping, eco-tourism and renewable ocean energy were found to be promising. The Ficci report points out that intra-regional trade among BIMSTEC countries was about $40.5 billion in 2016 (about 6 per cent) with India having 50 per cent share ($21 billion), followed by Thailand 30 per cent ($12.2 billion) and Myanmar 14 per cent ($6.1 billion). Negotiations for a free trade agreement among BIMSTEC members have been going on for some time, though without much success. A 2018 policy brief by Observer Research Foundation (ORF) states that BIMSTEC's significance lies in the fact that it was formed out of the necessities of the member countries. "India was motivated to join BIMSTEC as it wanted to enhance its connectivity with ASEAN countries. For Thailand, BIMSTEC helps achieve the country's Look West Policy. BIMSTEC also helps smaller countries such as Bangladesh, Nepal and Bhutan to develop connectivity with ASEAN countries, the hub of major economic activities globally", ORF note says. Ficci report endorses this observation. "In 2016, BIMSTEC member states together had a total export of $536.8 billion and an import of approximately $641.7 billion, thereby making it one of the most active trade-driven regional blocs of the world, it endorses.

In 2017, Ficci conducted a perception survey to understand what various stakeholders - corporate, governments etc - think about BIMSTEC's potential and its current status in terms of economic relations, ease of doing business, connectivity, policy advocacy, sustainability and development. When quizzed on the potential of trade with the BIMSTEC nations, 75 per cent of the respondents stated unequivocally that the most preferred destinations are India, Bangladesh and Myanmar. The survey respondents rated agriculture, processed foods and energy, as the most preferred sectors for trade and investment, followed by tourism including medical tourism and engineering. Poor infrastructure and connectivity were stated as the main reasons for low intra-regional investment in the region by the respondents of the survey. Over 90 per cent respondents said a BIMSTEC Free Trade Agreement (FTA) in goods and services would significantly improve trade and investment within the region.

As percentage of India's overall foreign trade, BIMSTEC engagement might be small, but Ficci notes that India's trade with the rest of BIMSTEC countries has full-fledged growth at an annual rate of 10.4 per cent as compared to intra-BIMSTEC trade growing at 0.62 per cent. "India's exports to BIMSTEC nations rose 16.6 per cent in 2014-15 to $ 22.3 billion, while its imports from the same countries rose 8 per cent to $9.3 billion during the year," the report states.

The promotion of BIMSTEC also arises from India's lack of confidence in the other regional group - the South Asian Association of Regional Cooperation (SAARC), which incidentally consists of most common members like India, Bangladesh, Sri Lanka, Nepal and Bhutan.  Of the other members of SAARC, India continues to maintain good relations with Maldives and Afghanistan. If SAARC remains non-functional, India may want to put the blame on the last member of the bloc, Pakistan. "Even after three decades of its existence, SAARC's performance has been less than satisfactory, and its role in strengthening regional cooperation is being questioned. SAARC faced another setback after the 19th summit scheduled, to be held in Pakistan in 2016, was suspended for an indefinite period as member countries declined to participate, pointing to what they said was the absence of a conducive regional environment," the ORF policy brief says. Incidentally, Prime Minister Modi had invited leaders of SAARC nations to his swearing in the ceremony during his first term in power, five years ago. The fact that most of the SAARC members, barring Pakistan, continue to enjoy that preference during this term, too, points to the shift in India's preferences when it comes to the economic and trade cooperation among its neighbours.

Diplomacy in itself cannot remove barriers to trade and economic cooperation. BIMSTEC needs lots of policy initiatives from its members, especially from its leading partners India and Thailand for the cooperation to make tangible benefits.  "The lack of critical support - strong and clear political commitment, adequate financial resources, full engagement of business and industry, and optimal involvement of civil society - has been the principal constraint," says Ficci, and the need of the hour is to address these concerns.