Rebooting Economy 64: Budget numbers don't add up to 10% or more growth in FY22

Little attention to direct income support, health and education deprivations, and revival of small businesses will keep the demand and production of goods and services depressed in FY22

Just ahead of the budget, the FY20 growth was reduced from 4.2% to 4%, which will lift the FY22 growth rate
Prasanna Mohanty

True to the trend, the budget for FY22 neither acknowledges nor seeks to address the biggest challenges that the pandemic-induced lockdown brought: massive loss of jobs and businesses, particularly smaller businesses; deepened poverty and hunger and worsened health and education inequalities. (For more read "Rebooting Economy 62: Economic growth for whom and for what? ")

If one were to ignore the allocation of Rs 35,000 crore for vaccination, the budget gives no impression that India is going through an unprecedented human and economic crisis. The challenges are known, and so are their adverse impact on demand to revive growth (the GDP growth is estimated to be minus 7.7% in FY21) but the magnitude of these challenges is not known because the government made no attempt to do so, as feared. (For more read "Rebooting Economy 63: Budgeting FY22 with critical information gaps ")

Rather, it is a budget for normal times with provisions for more of infrastructure spending, tax concessions for businesses, liquidity infusion, financial reforms and monetisation of assets to boost GDP growth. The underlying assumptions are the neoliberal economic thinking that the rising tide lifts all boats and growth trickles down. The stock market approved it with the BSE Sensex jumping by more than 3,000 points in the first two days (February 1 and 2).

That loss of millions of jobs and shutdown of millions of small businesses are the biggest stumbling blocks to reviving demand or improving production of goods and services need no elaboration. Most global estimates say 40 million to 85 million of Indians would slip into 'extreme poverty' (per capita per day living expense of $1.9).

A new study now says poverty reduces productivity of workers too. That would further hurt the economic recovery.

Behavioural economists from top US institutions like the MIT, University of California and University of Chicago studied the impact of cash support to poor workers on their productivity and published their findings, "Do Financial Concerns Make Workers Less Productive?", in January 2021. It concludes: "Having more cash-on-hand... enables workers to work faster while making fewer errors, suggesting improved cognition".

The study explained: "Concerns about money can create mental burdens such as worry, stress, or sadness. These in turn could interfere with the ability to work effectively." The productivity of workers given cash in hand went up by 6.2%, the effect was found to be "concentrated among relatively poorer workers" and mistakes (leading to poor quality product) declined.

Behavioural economists have known this, but this was, unlike others, a field experiment that confirmed the earlier (lab) findings. The workers in this experiment engaged in farming activities during sowing and harvesting seasons and did odd jobs in other times, in this case making leaf plates for local eateries. They were given Rs 1,400 in advance - corresponding to their one month's wage during lean seasons.

Does it seem the experiment is perfectly designed for India?

The experiment was actually carried out in Odisha.

Does this study say something about the new US administration's plans to give more cash in the hands of people who have lost jobs and also raise minimum wages? The US and other countries provided liberal cash assistance to people who lost jobs during the pandemic and the OECD countries reported to have saved 50 million jobs through their job retention schemes. (For more read "Rebooting Economy XXIII: What stops India from taking care of its crisis-hit workers? ")

India did neither. The budget doesn't either.

The government often cites fiscal constraints for its inability to do this, but this budget provides Rs 20,000 crore for re-monetising public sector banks (PSBs).

Leaving job creation and revival of small businesses to chance

The budget was expected to address the loss of jobs and businesses during the pandemic (incipiently pre-pandemic which started with the demonetisation and GST) but it didn't. It relies on higher spending on infrastructure and EPF subsidy (Atmanirbhar Bharat Rojgar Yojana). Sure, these will help but that is for normal times, for normal growth in employment, without addressing the unprecedented loss of jobs and businesses caused by the lockdown and the slowdown that preceded it.

The Pradhan Mantri Garib Kalyan Rozgar Yojana (PM-GKRY) was launched last year to provide rural jobs to migrant workers who returned to villages. This has been discontinued (no allocation) to suggest that the reverse migration has reversed.

The MSME sector has been dismissed casually in the budget speech: "We have taken a number of steps to support the MSME sector. In this budget, I have provided Rs 15,700 crores to this sector, more than double of this year's BE," finance Minister Nirmala Sitharaman said while presenting Budget 2021-22 in the Parliament.

By December 2020, the finance ministry had disbursed Rs 1.58 lakh crore of collateral-free credit to the MSMEs (out of Rs 3 lakh crore earmarked) and said it expected 45 lakh units to resume business. At this rate, another Rs 15,700 crore for FY22 would mean 5 lakh more units to resume business. These are just 7.8% of the total MSME units (6.34 crore), 99.5% of which are micro units.

The finance minister said the government went on a spending spree to revive the economy and declared to spend more in the next fiscal year. Nothing can be further from the truth.

There is a bigger catch here.

These additional subsidies are past expenditures hidden from the budgets through off-budget borrowings for years. 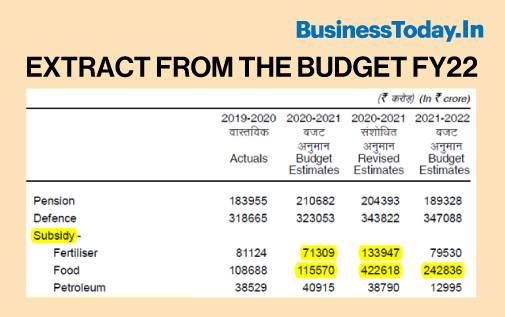 When it comes to spending for FY22, the total expenditure is just 1% more than FY21 (RE).

The budgetary calculations of 1% rise in government expenditure for 10% GDP growth seems more than a mere optimism given that the two main engines of growth, private consumption demand and investment accounting for 90% of the GDP, are long depressed (both incipiently pre-pandemic too). 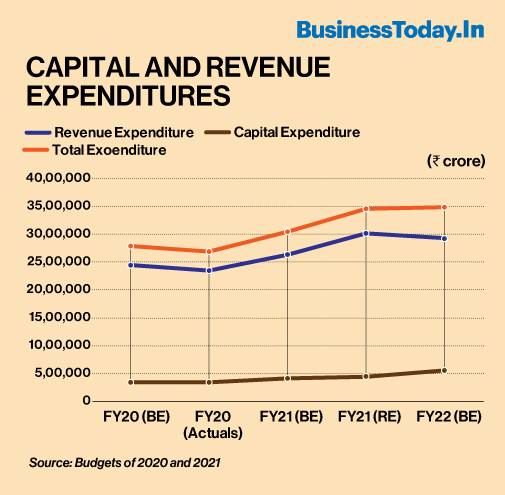 Here is the spending plan in key areas like health, education, agriculture and rural development, which are key to reviving growth, and also the past trends in these spending. The pandemic exposed India's healthcare and devastated socio-economic conditions of people with more than 10.8 million cases and more than 1.5 lakh deaths. The daily cases continue to be around 10,000 a day.

Contrary to expectations, the allocation for health in FY22 falls by 9.5% over FY21 (RE) - from Rs 82,445 crore to Rs 74,602 crore - suggesting that the pandemic is over, there would be no more infections or deaths, and hence, calls for no higher health spending.

The budgetary allocation is higher by 10.5% over the last year's budget but there are plenty of anomalies in numbers. For example, the ministry-wise details reveal that the health ministry's allocation is Rs 71.269 crore, not Rs 74,602 crore that "Budget at a Glance" gives.

Interestingly, of this Rs 71,269 crore, Rs 3,480 crore is allocated to the Central Roads & Infrastructure Fund (CRIF). A government notification of 2019 lists "social and commercial infrastructure" development as one of the activities, but also says that the fund is run by the finance ministry, not the health ministry, which may have unforeseen implications.

The finance minister announced Rs 64,180 crore for a new scheme, PM Atmanirbhar Swasth Bharat Yojana, to develop capacities of primary, secondary, and tertiary care in 122 aspirational districts but this is over six years. Is the transfer to CRIF (Rs 3,480 crore) a part of it?

As for nutritional support, it is relevant to recall that the health ministry's health survey (NFHS-5) of 2019-20 (released in December 2020) had hit the headlines for all the wrong reasons: child malnutrition indicators had stagnated since 205-16 and in the majority of states the proportion of underweight children and child stunting had increased.

The budget does not allocate more for nutritional programmes, but less.

India's public education system has been neglected ever since the private sector was encouraged in education (as in the case of healthcare too) in the post-reform era. The intent to strengthen and open new schools are good promises but what about the Oxfam International's finding that during the pandemic rural children were deprived of education since only 4% households have access to computers and less than 15% to internet connections?

Rural distress has been high for years and the pandemic saw millions walking back to their villages. The rural economy needs higher assistance, but the budget lowers allocation for rural development by 10% over the FY21 (RE). This would mean the government thinks the rural distress is over.

The allocation for agriculture has increased by Rs 2,946 crore over FY21 (RE) but is lower by Rs 6,474 crore from the last year's budget. Tall claims about front-loading the PM-Kisan cash transfers (Rs 6,000 per year to all farmers) notwithstanding, the government intends to spend Rs 10,000 crore less in FY21 (RE) from Rs 75,000 crore budgeted last year. The allocation for FY22 has also been brought down to Rs 65,000 crore.

Will India become the fastest growing economy in FY22?

Going by the growth numbers for FY22 that may be the case but that would be a temporary blip and then back to low growth, unless a miracle happens.

This growth will be from minus 7.7% growth in FY21, and hence would mean a GDP growth of 2.4% over the absolute level of FY20. The Economic Survey recognises this very well.

There are other reasons to be skeptical of the FY22 growth number.

Just ahead of the budget, the FY20 growth was reduced from 4.2% to 4%, which will lift the FY22 growth rate. There have been several such retrospective revisions in GDP numbers, creating doubts about their reliability in the first place. (IMF and World Bank rely on India's data for GDP)

Further, the FY21 growth projection is based on the quarterly GDP data of FY21 which relies on formal sector indicators for industry and services and partly on actual data for agriculture. Thus, this calculation can't be a reliable indication of the actual growth number. (For more read "Rebooting Economy XXVIII: Is India poised for agriculture-led economic turnaround? ")

Should one get carried away by the 11% growth figure and assume everything is alright? Or that the budget is good enough to revive growth? That would be unwise.