True extent of central government's off-budget financing is not known. CAG picked some cases for scrutiny in the recent past and found an alarming rise in the magnitude of such financing, which is not only distorting the budget numbers but also poses a serious challenge to fiscal responsibility. Part I of this two-part series looks at the trends and why it should concern all

That India's budget numbers are highly suspect because of off-budget financing is well known. What is not known is the true extent of it and the various ways the central government is doing it. The Comptroller and Auditor General of India (CAG) has scrutinised a few accounts and found it extend far beyond deferring payments as earlier suspected, including capital investments.

The 'strategic disinvestment' has not attracted its attention so far but this could well be another tool for generating off-budget financing as the case of ONGC and others may indicate.

But first what is well-established but not so well-known or appreciated.

The CAG warned about the off-budget financing some years ago because it remains beyond the control of the Fiscal Responsibility and Budget Management (FRBM) Act of 2003 or the Parliament. In its report tabled in 2019, CAG listed three more reasons: (a) current quantum of such borrowings "is huge" (b) current policy framework "lacks transparent disclosures and management strategy" for comprehensively managing such borrowings and (c) the central government is shying away from making full disclosures.

Here is the extent of the off-budget financing that is known.

(a.) Off-budget financing for revenue expenditure

The CAG's report on the FRBM compliance for 2016-17 - Report No. 2 of 2018 tabled on January 8, 2019- says the Central government has "increasingly resorted to off-budget financing" for revenue spending.

It looked at three areas of central government's spending: (a) fertilizer arrears/bills through 'special banking arrangements' (SBA) (b) food subsidy arrears/bills of the FCI through its market borrowings and (c) implementation of irrigation scheme (Accelerated Irrigation Benefits Programme or AIBP) through borrowings by the NABARD under the Long Term Irrigation Fund (LTIF) set up in 2016-17.

What is the extent of off-budget financing for revenue expenditure? The following three graphs show the numbers. The accumulated subsidies adversely affect the cash flow of companies which are to be paid by the central government. Besides the principal, interests are also to be paid. Interest paid on 'special banking arrangements' amounted to Rs 314.86 crore between FY14 and FY17. As the graph demonstrates, there was an increase of about 350% in carried over food subsidy in five years preceding FY17. 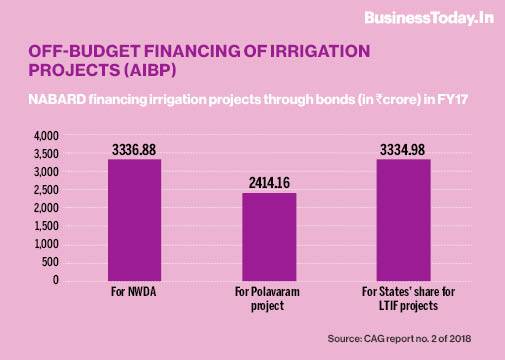 Earlier the expenditures for AIBP schemes were provided through budget appropriations but "due to off-budget financing, it does not appear in the budget of 2016-17 onwards", says the CAG report.

How much was the actual revenue deficit in FY17?

The CAG does not spell out the actual numbers because it picked only three instances to find out the extent of off-budget financing. But the three taken together, the 'actual' numbers concerning revenue and fiscal deficits change significantly. Here is how.

Adding up the off-budget numbers would take the 'actual' revenue and fiscal deficit to 2.9% and 4.3% of the GDP, respectively.

Also Read: Budget 2020: What measures should be taken for affordable housing?

What would be the case in FY18 and FY19? One would now have to wait for the CAG to shed light.

(b.) Off-budget financing for capital investment

For the first time, the same CAG's report found the central government using off-budget borrowings as "a prominent method of financing capital expenditure" and issued a warning: "It appears that there is no policy with respect to either rate of return, creation of assets, potential of increase in income, socio-economic or regional disparities for deployment of borrowed funds."

That is risky because the CAG says there is a likelihood of borrowed funds being deployed "in areas which do not generate enough returns to cover future debt servicing needs".

The CAG does not venture into guessing what part of these borrowings is off-budget. Nor does it indicate the true extent of such borrowings for capital investment. One would have to wait for CAG's next audit reports to know more.

Here is why it is important to know these off-budget borrowings.

On December 31, 2019, the finance minister unveiled an ambitious plan to spend an additional Rs 102 lakh crore on infrastructure projects in the next five years without disclosing the source of money. Evocatively named National Infrastructure Pipeline (NIP), the central government and state governments would contribute equally (39%) to the NIP and the rest 22% (contribution) would come from the private sector.

So, where would the 39% of Rs 102 lakh crore (or Rs 39.8 lakh crore) come from when the revenue and disinvestment receipts are nowhere near the target and deficits are expected to rise?

The revenue collection is expected to dip low in FY20 due to two factors: (i) slower growth rate (an estimated 7.5% nominal GDP growth against the budgeted rate of 12%) and (ii) Rs 1.45 lakh crore corporate tax cut.

Actual off-budget financing areas could be many more

What should come as a greater concern that while the CAG is yet to expand its scrutiny beyond the five areas mentioned, several national business dailies have flagged off at least three more areas: (i) loans provided by oil companies to the Ujjwala scheme beneficiaries (ii) banks mobilising resources on their own for recapitalisation (in addition to infusion of capital by the government) and (iii) NHAI investments when the government is reluctant to fund it.

Some of these reports also point out that the CAG had reportedly demonstrated to the 15th Finance Commission in July 2019 that the actual fiscal deficit for FY18 could be 5.8% of the GDP - not 3.46% as the central government had claimed.

Part II of this article would look at another area of off-budget financing that has escaped CAG's attention - 'strategic disinvestment' in CPSEs the tabs for which are picked by other CPSEs. This is worrisome as it threatens to jeopardise the financial health of many CPSEs, including the 'navaratnas' for short term fiscal gains.