The study conducted by Mumbai-based CNI Research has found that the physical delivery option introduced in the commodities market is the root cause of the high inflation.

B.S.Srinivasalu Reddy
A study of trading patterns in essential commodities has brought to light how speculation in commodities futures markets is leading to hoarding of commodities many times their annual production, boosting their prices.

The study conducted by Mumbai-based CNI Research has found that the physical delivery option introduced in the commodities market is the root cause of the high inflation that is pinching Indian households. In the futures market, a trader can corner a huge quantity of a commodity by paying just seven to eight per cent of the total cost and back it up with physical commodity.

MUST READ: Tips to invest best in commodities

Experts consider open interest up to five times the annual output in commodity futures a normal trend and anything beyond to be abnormal and a driver of prices. 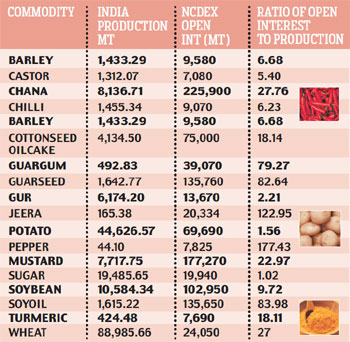 The study proves the arguments of some political parties that commodities futures markets are to be blamed for the high prices. The Reserve Bank of India (RBI) and the Centre are fighting hard to combat inflation even at the cost of growth.

A look at the past 64 years shows that inflation did not worry India even in the face of severe droughts. For the past nine years monsoon has been benevolent but one big drought shows the real impact of inflation.

The real inflation has shot up to over 200 per cent in the last two years, confounding economists and politicians alike.

The modus operandi is as follows: The average consumption of jeera per person cannot exceed half a kilo in a year. One trader can buy 200 tonnes of jeera physically and then short it in futures. The jeera is kept in a warehouse as the trade is carried out month after month without squaring off. Thus, one person is hoarding jeera equivalent to the needs of two lakh people. If 100 brokers do it, the hoarding would be equivalent to the needs of two crore people.

The study was conducted among 200 brokers of NCDEX, which is the major trading platform for agri commodities.

MUST READ: Invest in Spices for good returns

The open interest in the NCDEX currently shows 20,000 tonnes which could rise further and make inflation higher if no effective steps are taken, the study said.

Physical settlement is a good technique to allow market forces to determine the prices, particularly in shares or commodities like silver and gold where ordinary consumer's interest is not affected.

"However, allowing physical settlement in necessities such as jeera, wheat, daal, sugar, chilli, etc is as dangerous as killing 120 crore people of the country, most of which are either middle class or below poverty line," Ostwal said.