"Markets corrected significantly in March, but we saw a rally in April so promoters used this as an opportunity to release some of their pledged shares," said Pranav Haldea Managing Director at PRIME Database Group Improved market sentiment not only rewards investors but gives promoters the financial muscle to free up their shares pledged with the lenders. Promoters of Adani Group companies such as Adani Ports & SEZ and Adani Transmission and Torrent Pharmaceuticals went ahead with releasing over Rs 1,000 crore worth of pledged shares each in April. Kalanithi Maran, promoter, Sun TV Network, released largest pledges in May worth 1.34 crore shares or Rs 510.3 crore. The other significant releases of over Rs 450 crore included that of Adani Green Energy and UPL. These companies account for a substantial share in the total amount released through such transactions, according to data sourced from nseinfobase.com. Together, promoters of around 45 companies managed to release pledged shares amounting to Rs 41,162 crore, over the past two months.

The country entered into a nationwide lockdown in March, the month when the domestic equity market mirrored the global sell-off. The Sensex posted its worst performance for the month since the global financial crisis, declining 23 per cent in March, but followed by a double-digit growth of 14.4 per cent in April largely driven by the optimism of relaxed lockdown globally. Nonetheless, the markets struggled in May with the Sensex declining around 4 per cent but recovering nearly 27 per cent from their March lows. "Markets corrected significantly in March, but we saw a rally in April so promoters used this as an opportunity to release some of their pledged shares," said Pranav Haldea Managing Director at PRIME Database Group. 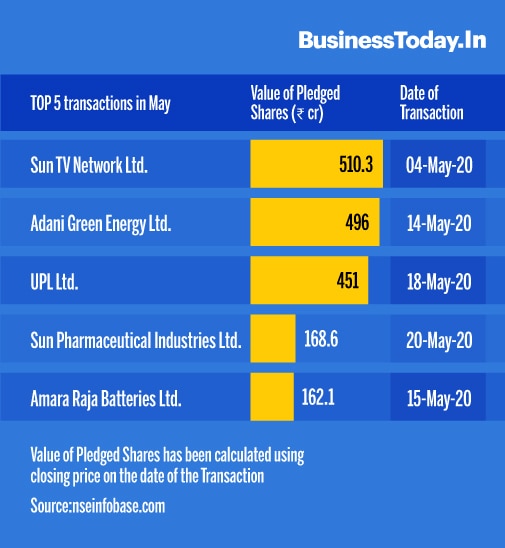 Having said that, pledging of shares by promoters in NSE-listed companies saw a marginal increase in May, as per PRIME Database Group. It went up from 13.05 per cent as on April 30 to 13.07 per cent on May 31. "Irrespective of how markets behave, promoters who are in need of fund are not able to raise money through other means will again resort to pledging of shares to raise money," adds Haldea. Moreover, in the case of share pledging, if share prices go down, promoters either have to provide more shares for the collateral or repay a part of the loan. That said, there has been an increase of 26 basis points due to greater creation of share pledges as collateral by promoters in March.

Going forward, the markets are expected to remain volatile and will be following global cues and tracking the development around coronavirus cases and vaccines. "There will be a fair amount of choppiness in the markets and accordingly you will see activity on the pledging side," Haldea noted.