UP CM Yogi Adityanath had reviewed the first draft of Jewar airport design, name and logo on Thursday 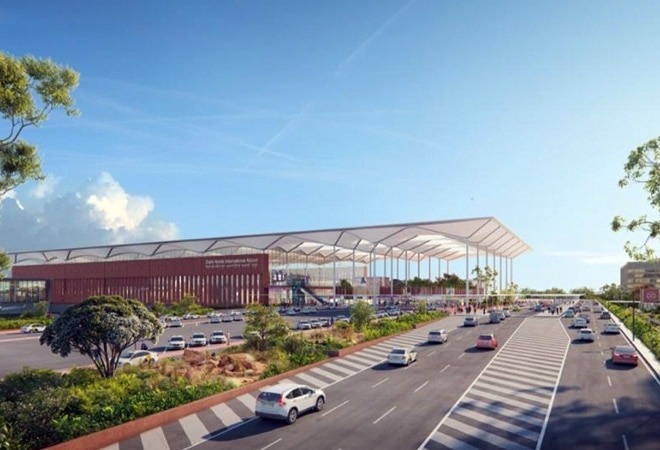 The airport is being developed by Swiss developer Zurich Airport International AG. The company has finalised the design, logo and name for the airport, which was later reviewed by CM Yogi Adityanath on Thursday.

The Noida International Greenfield Airport will have a picture of Sarus Crane - the state bird of UP - as its logo. It will be designed on the lines of world-famous airports in London, Moscow and Milan.

Zurich Airport International in a statement said that the brand logo is a symbol that shows a Sarus Crane - the state bird of UP - in flight. The symbol is created using thin uniform converging lines with a blue-green colour gradient fill symbolising technology and connectivity on one hand and eco-consciousness on the other, it said.

"The upward movement denotes positivity and upliftment of experience. The logo effectively combines technology with emotions while lending sophistication and elegance. The logo echoes Noida International Airport's vision to be India's leading airport in terms of quality, efficiency, technology and a role model for sustainable infrastructure and operations, delivering an exemplary experience to all customer segments," the Swiss developer said.

Commenting on the development, Christoph Schnellmann, Chief Executive Officer, Yamuna International Airport Private Limited said, "We are pleased to finalise Noida International Airport as the official brand name for the upcoming airport at Jewar. The logo is the true reflection of building India's leading airport which is an amalgamation of efficiency, technology and a sustainable and eco-friendly infrastructure, while keeping a symbol of Uttar Pradesh at the core. We would like to thank the Government of Uttar Pradesh for their support in the process, as this will help us build the brand identity and recall value of the airport across customers and stakeholders."

In November last year, Zurich Airport International AG (ZAIA) won the contract to build and operate the airport in Greater Noida for a period of 40 years, which includes construction period of four years in the first phase. ZAIA received the security clearance from the Union Ministry of Home Affairs to develop the Noida International Airport at Jewar in May this year. Last week, a four-company consortium was selected to design the passenger terminal at the airport. The winner team includes four companies from Norway, England and India - Nordic, Grimshaw, Haptic and STUP.

Jewar airport, which is being built along the Yamuna Expressway, has estimated budget of Rs 29,560 crore. The Yamuna International Airport Private Limited (YIAPL), a 100 per cent subsidiary of Zurich International Airport, has been allotted 1,334 hectares of land in Jewar along the expressway for the airport. The airport will be built within next three and a half years.

In the first phase, the company will build one runaway, apron space, 12 boarding bridges for the terminal, and cargo catering space at estimated cost of Rs 4,500 crore. The airport is expected to cater to 12 million passengers per annum after the first phase of construction.