In the just released fourth quarter results, Gill said he will lay emphasis on granularity, sustainability and digitisation, while maintaining highest standard on compliance and prudence in risk Yes Bank CEO Ravneet Singh Gill, who is just a month old in the bank, has already started strategising.

Foreign banker Ravneet Singh Gill is in unfamiliar territory. After having spent his almost entire career in a foreign bank, he is now heading a mid-sized private bank. Secondly, Gill, who holds a master's degree in political science from Delhi University, is filling the shoes of a founder and professional, who scaled up the bank in the shortest possible time. In fact, Rana Kapoor actually nurtured the bank like an entrepreneur. The circumstances under which Gill has entered the bank -- after RBI refused to extend the tenure of Rana Kapoor -- were also challenging. In fact, Rana's favourite Rajat Monga, executive director at the bank, also lost out in the race for CEO to Gill. Another senior professional, whom Kapoor poached from HDFC Bank to scale up the retail banking Executive director Pralay Mondal, also left when he realised he would no longer be working under Kapoor.

But Gill, who is just a month old in the bank, has already started strategising. In the just released fourth quarter results, Gill said he will lay emphasis on granularity, sustainability and digitisation, while maintaining highest standard on compliance and prudence in risk. There are already reports of him revamping the entire management team. This is something the market has seen before when two foreign bankers joined the private banks. Vishwavir Ahuja, who came from Bank of America and built a new team at RBL Bank to completely turnaround the old private sector bank. Similarly, Romesh Sobti, who came from AMB Amro and transformed the IndusInd Bank with a completely new team of foreign bankers.

The role of the earlier team under Kapoor has come under the scanner as the bank faced huge NPA divergences and compliance issues. Probably Monga's name didn't find favour with the RBI because of the same reasons. There is also a Madhu Kapur factor. The wife of another co-founder Ashok Kapur, who died in the Mumbai terrorist attack, was earlier not happy with the way Kapoor was running the bank. However, the two warring promoters of the bank seem to have buried the hatchet now. Madhu Kapur would also like a new team to take the bank forward.

Two new CEOs at other private banks have also come out with a new game plan to revive and kick start the growth. At Axis, the new CEO Amitabh Chaudhry wants to focus on 'growth, profitability and sustainability.' Similarly, Sandeep Bakhshi at ICICI Bank is eyeing the growth in core operating profits. There are many challenges that Gill will have to address;

The bank has grown at a scorching pace in the last decade in terms of its revenues, profits and balance sheet size. But along the way, it took wrong bets on the corporate side. The deterioration in asset quality and high exposure to corporate lending has already impacted profitability. The share of corporate lending in the book has been over 60 per cent. With no fresh capital in sight, the bank has already applied brakes on high growth by conserving capital. They already have plans for loan sell downs to free up capital. Gill seems to have decided to take a call on the resource mobilisation immediately and has to take a call on raising equity, which is of prime importance. In a meeting today, the board has recommended renewal of an aggregate limit of $1 billion for raising equity capital. The bank actually failed to raise the capital on time when the price was ruling at overRs 400 per share plus. Today, it has gone down to 237 per share; this means to raise the same amount, the bank will have to do more dilution of equity, which is not good from the equity returns or market perspective. The post equity dilution cap was earlier fixed at 10 per cent.  In the past, K V Kamath was lucky when just before the global financial meltdown, he raised over a billion-dollar capital from the market when the valuation of the bank's share was at the peak. This capital saved the bank in the tough period post-2008 when bank saw difficult days. 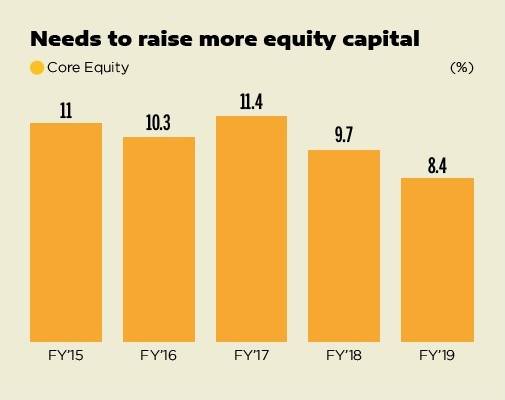 Wrong bets in corporate portfolio: Gill to diversify or balance the portfolio mix

Gill will have to make some changes is the business model. The bank had reported huge NPA divergences, not once but twice. He will have to also make adequate provisions for stressed loans to bring out a clear picture.Under Gill, the bank has created a contingency fund of Rs 2,100 crore based on a review of the credit portfolio.Unlike some banks like HDFC Bank, Kotak Bank or an IndusInd Bank, Yes Bank under Kapoor took bets in specific companies that were in need of urgent funds. Take, for instance, Jet Airways, in which Yes Bank is one of the big lenders.

The bank will have to make huge provisions if the airline doesn't revive. Experts suggest the bank will follow a strategy which other private banks are following i.e focus on high-rated corporate and stay away from large lumpy corporate loans. ICICI Bank and Axis Bank have already announced that their focus will be on high-rate corporate. As a result, there is already a competition for investment grade corporate, which means lower returns. The bank will now have to settle for a low yielding new corporate business like other banks. Gill, who has good relationships with MNCs, can focus on fee-based income, which doesn't require much capital. Similarly, there is a huge scope for advisory business. Gill, however, hinted that "the bank will continue to expand its corporate business, which is the foundation on which Yes Bank has been built." The bank has seen a gradual decline in its provision coverage ratio. This ratio indicates the provisions against the gross NPAs. The higher the ratio, the better is the bank's ability or capacity to absorb losses. The bank's coverage ratio has gone down from 72 per cent five years ago to 43.2 per cent. Gill's big task is to increase the ratio and also maintain profitability levels. In the fourth quarter the bank has made a huge provision of Rs 3,662 crore, which takes the full year provision to Rs 5,778 crore. As a result, the bank has reported a net loss of Rs 1,507 crore. The entire year profit has been reduced to Rs 1,720 crore  in 2018-19 as  against  Rs 4,224 crore last year. 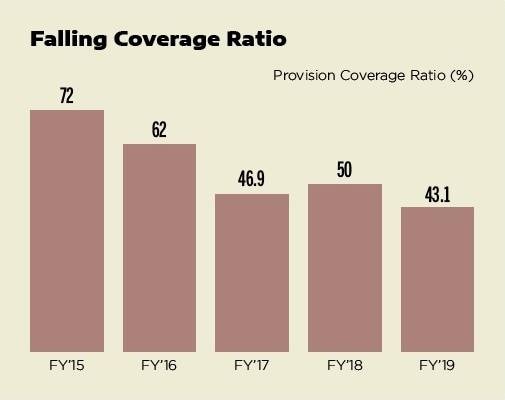 Lesser share of retail in portfolio: Gill to expand the retail assets as well as low-cost deposits

The bank has very less retail assets as compared to other private banks. The bank's focus initially was on more advisory business on the corporate side. Gill will focus on the retail business as it is more stable than corporate and also has far lesser NPAs. Currently, consumer financing is around only 15 per cent. The bank includes business banking and small microloans under the retail banking, which makes it around 34.4 per cent. The retail share of many of the private banks is in the upwards of 50 per cent. Currently, retail banking growth is compensating many banks on the corporate side, which is not growing. There are also pockets to grow within retail in the high yielding businesses such as credit card, personal loans etc. Consumer durable financing and affordable housing are two other new businesses that offer the potential for growth.