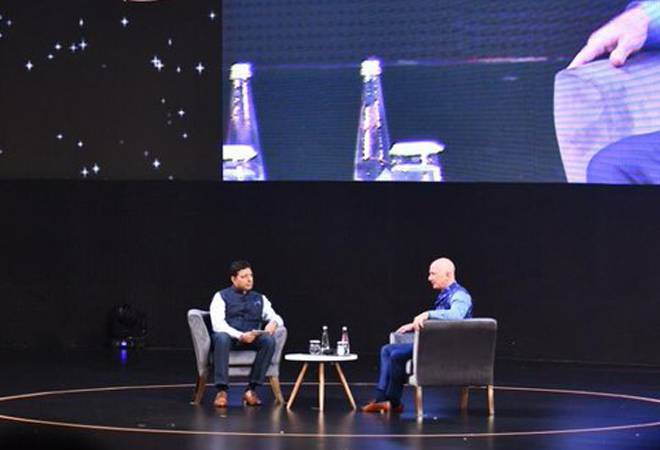 Jeff Bezos in India: The Amazon CEO said that India has something very special

Amazon.com's founder Jeff Bezos on Wednesday announced an incremental investment of $1 billion in India to digitise the country's small and medium businesses. The announcement, made at the company's event Smbhav in New Delhi, comes at a time when small traders are protesting against alleged predatory pricing and deep discounting from large global marketplaces.

The event, largely for small businesses, looked tailor-made for Bezos to make the right noises. Attended by about 3,000 such businesses, Bezos spoke on everything from Indo-US relations to space entrepreneurship. Billions of Make-in-India products can be exported in the years ahead, leveraging the company's global footprint, he said.

Bezos also reflected on his space venture, Blue Origin. As a child, he studied rocketry and rocket propulsion. Now, he is passionate about lowering the cost of access to space. "Long term, if we have to grow our civilisation, we have to use resources in the solar system. We need space entrepreneurs," he said. However, today, the price tag to get into space entrepreneurship is very high -- two kids in a dorm can start a software company but not a space venture.

Blue Origin is about launch, land, and repeat. It is about reusable launch vehicles. The company believes that rockets should operate more like an airplane and should not be disposed of after one use.

Bezos also reflected on failures. "Amazon is the best place in the world to fail," he said and pointed to two kinds of failures. There are experiments, which are high quality failures, he said. "That's how you get innovation," he quipped. Amazon failed many times - it experimented with an auctions business and it failed, for instance. Marketplace, on the other hand, was a success. The Indian marketplace today has over 5.5 lakh sellers, mostly small businesses.

The second sort of failure, Bezos said, was operations performance failure. It is about bad execution and one that cannot be celebrated.

At a time when small traders are upping the ante against Amazon, Bezos' presence at the event, and his investment announcement, appeared a move to assure policy makers that the company was committed to India for the long-term.

Also read: Amazon will export $10 billion worth of Make In India goods by 2025, says Jeff Bezos