Those rescued from Japan will likely to be quarantined in New Delhi for about two weeks; the special Air India flight also carried five nationals from Sri Lanka, Nepal, South Africa and Peru 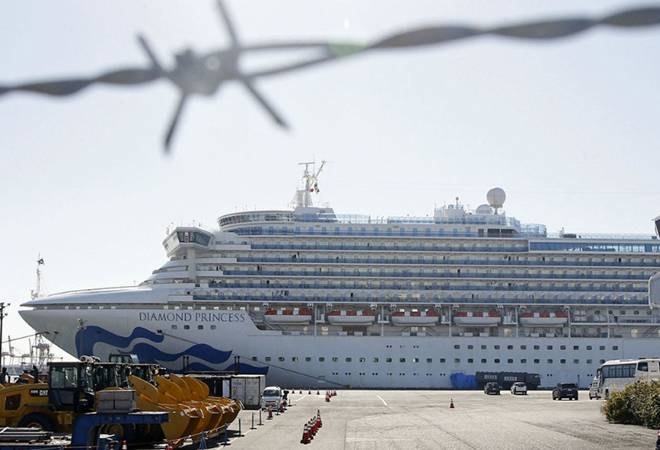 The British Diamond Princess cruise ship carrying 3,711 people on board was kept in quarantine off the coast of Yokohama, Japan, for a month. Photo: AP

After days of wait, a special Air India flight carrying 119 Indians, who were stranded onboard a coronavirus-hit cruise ship, Diamond Princess, off Yokohama port in Japan finally landed in New Delhi on Thursday morning. The special flight also carried five nationals from Sri Lanka, Nepal, South Africa and Peru. Apart from this, the government has also rescued 76 Indians from China's Wuhan region, which is the epicentre of the new coronavirus outbreak.

"Air India flight has just landed in Delhi from Tokyo, carrying 119 Indians and five nationals from Sri Lanka, Nepal, South Africa and Peru who were quarantined onboard the #DiamondPrincess due to #COVID19. Appreciate the facilitation of Japanese authorities. Thank you @airindiain once again," Foreign Minister S Jaishankar said.

Consignment (15 tonnes) of Indian medical relief for #COVID19 lands in Wuhan. Strong expression of our solidarity with the Chinese people at this difficult time. Thank you @IAF_MCC and @EOIBeijing for your efforts. pic.twitter.com/v2ph3LHogM

Those rescued from Japan will likely to be quarantined in New Delhi for about two weeks. Jaishankar also thanked Indian Embassy in Tokyo for its sustained efforts in rescuing Indians.

Several Indians onboard cruise ship Diamond Princess off had earlier appealed for help from the Indian government and Prime Minister Narendra Modi.  The British Diamond Princess cruise ship carrying 3,711 people on board was kept in quarantine off the coast of Yokohama, Japan, for a month. One such crew member, Anbalagan, who hails from Madurai, Tamil Nadu, had shared several videos, explaining the conditions on the ship. As per Anbalagan, all passengers were secluded in the ship's top decks where they were being sent food to rooms only. He had said they were allowed to walk only for a few minutes a day.

Expressing solidarity with the Chinese people in wake of new coronavirus outbreak, the Foreign Minister also informed that Indian medical relief consignment weighing 15 tonnes had also landed in Wuhan. On returns, India brought back over 100 people, including 76 Indians, from China, the Minister said. "On its return from Wuhan, the IAF flight has brought back 76 Indians and 36 nationals from 7 countries -- Bangladesh, Myanmar, Maldives, China, South Africa, USA and Madagascar," he tweeted.

The government has said it's closely following the developments in China in the wake of the coronavirus outbreak. Prime Minister Narendra Modi has also written to President Xi Jinping, expressing India's commitment to assist China. China reported 29 more deaths due to the new coronavirus epidemic on Wednesday, taking the total number to 2,744 in mainland China. The daily fatality on Wednesday fell to the lowest since January 29, when 26  deaths were