The Modi government moved to strip Jammu and Kashmir of its special status and split the state into two union territories, sparking uproar and jubilation over the unprecedented measures. 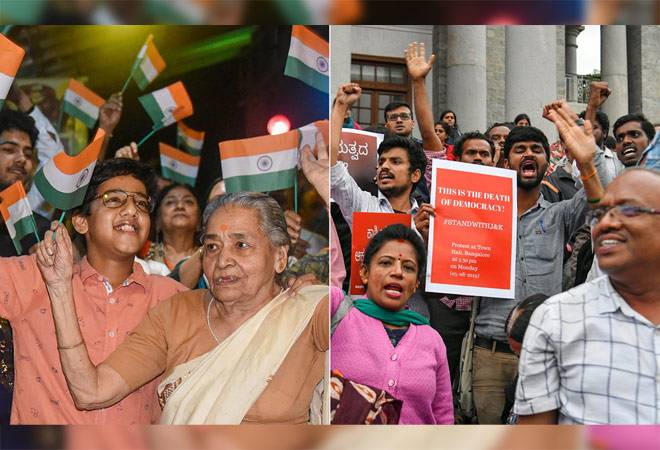 People in Indore celebrate revocation of Article 370 from Jammu and Kashmir (left), whereas activists protest against the move in Bengaluru (right). Photo credit: PTI

The Modi government moved to strip Jammu and Kashmir of its special status and split the state into two union territories, sparking uproar and jubilation over the unprecedented measures.

In its election manifesto, the BJP had pledged to abrogate Article 370 that allowed Jammu and Kashmir to have autonomy over most matters. The Centre had control over foreign affairs, defence and communications.

On Monday, home minister Amit Shah announced that the Indian Constitution has been extended in totality to Jammu and Kashmir.

The move came via a presidential order that superseded a 1954 proclamation, which added Article 35A. The 65-year-old provision granted permanent residents exclusive rights to property and jobs in the state.

"In exercise of the powers conferred by Clause (1) of Article 370 of the Constitution, the President, with the concurrence of the government of state of Jammu and Kashmir, is pleased to make the following order," the August 5 presidential notification read. "It shall come into force at once, and shall thereupon supersede the Constitution (Application to Jammu and Kashmir) Order, 1954 as amended from time to time," the notification added.

ALSO READ:Kashmir, Ladakh to be union territories: What's the difference between a state and UT?

Technically, Article 370 remains part of the Constitution till it is abrogated by Parliament but the presidential order effectively rendered Jammu and Kashmir's special status inoperative.

The measure also paved the way for the central government to redraw Jammu and Kashmir's map.

Shah moved the Jammu and Kashmir Reorganisation Bill 2019 in parliament, proposing bifurcation of the state into two union territories.

The Rajya Sabha passed the proposed legislation, with 125 votes in favour and 61 against. Another bill proposing ten per cent reservation for economically weaker sections in government jobs in Jammu and Kashmir also sailed through the Upper House.

The proposed union territory of Jammu and Kashmir, Shah explained, would have a legislature, like Delhi and Puducherry. Ladakh, according to the bill, will be carved out as a separate union territory with a legislature of its own, like Chandigarh and Andaman and Nicobar Islands.

And with Article 35A blunted through the latest presidential order, every Indian, irrespective of their domicile, will have access to education, employment and property rights in Jammu and Kashmir, analysts explained.

Subhash Kashyap, another constitutional expert, said the measure would help standardise fundamental rights of Indians, who were not allowed to settle down in Jammu and Kashmir earlier.

"I can only say, constitutionally it is sound. No legal and constitutional fault can be found in it. The government has carefully studied the matter," he said.

As the Rajya Sabha erupted in furious opposition, Shah defended the measures, saying they would lead to prosperity and peace in the restive region.

The Home Minister insisted that the government's move would help Kashmiris benefit from national laws. He cited the children's Right to Education legislation, which earlier excluded Jammu and Kashmir.

Shah said that Article 370 had been grossly misused by anti-India elements to stir trouble.

"Some groups misguided the youth in Kashmir because of Article 370 and 35A. Pakistan took advantage of that," the Home Minister said during the Rajya Sabha debate. "Then Pakistan President General Zia (ul-Haq) said that Kashmiri youth would not align with India's soul till (Article) 370 existed," he recalled.

As opposition members raised concerns over converting Jammu and Kashmir into a union territory, the Home Minister indicated the government would restore its statehood once the situation normalises. "If the situation improves, Jammu and Kashmir will become a state again. Decisions will be taken when the conditions are right," he said.

The BJP-led NDA government found support from the BSP, the Biju Janata Dal, the Aam Aadmi Party, the TDP and the YSR Congress as it moved to scrap Jammu and Kashmir's special status.

As opponents of Jammu and Kashmir's special status celebrated the move in parts of India, the Rashtriya Swayamsevak Sangh praised the government for its "courageous step".

ALSO READ:What rights will Kashmiris lose after Article 370, Article 35A are revoked

"We heartily congratulate the courageous step of the government. This was highly necessary for the benefit of the entire country including Jammu and Kashmir. All should rise above their interests and political differences and welcome and support this initiative," the Sangh said.

The Congress, the People's Democratic Party (PDP), the Trinamool Congress (TMC) and the National Conference (NC) vehemently opposed the move.

The PDP and the NC called the measures "betrayal". "The Centre's unilateral and shocking decisions today are a total betrayal of the trust that the people the people of Jammu & Kashmir had reposed in India when the state acceded to it in 1947," said NC chief Omar Abdullah, who was placed under house arrest on Monday.

"Today marks the darkest day in Indian democracy. The decision of J&K leadership to reject 2 nation theory in 1947 & align with India has backfired. Unilateral decision of GOI to scrap Article 370 is illegal & unconstitutional which will make India an occupational force in J&K," she tweeted.

ALSO READ:Article 370 revoked: How Kashmir became the valley of no investments and unemployment

The government, Vaiko alleged, had "murdered democracy". "I am opposing this... This is a day of shame, shame, shame... murder of democracy," the MDMK leader said.

In his remarks, Stalin condemned the government's measures. "Without consulting people of Jammu and Kashmir, Article 370 has been taken away. Democracy has been murdered. The AIADMK is also supporting the decision which is condemnable," he said.

In the run-up to the sensitive announcements, the government partially suspended mobile and internet services and imposed Section 144 in Jammu and Srinagar.

Riot-control vehicles were on standby in some parts of the state as schools and colleges were closed until further notice. The army and air force were also put on high alert.

Islamabad claimed it would "exercise all possible options" to oppose the measures.

"India is playing a dangerous game which will have serious consequences for regional peace and stability," alleged Pakistan's Foreign Minister Shah Mehmood Qureshi.

Revoking Jammu and Kashmir's special status, which debarred non-residents from buying property in the state, will open the doors for outsiders to invest in immovable property within the proposed union territory, business analysts said.

ALSO READ:Infographic: Before and after Article 370

"Real estate transactions so far have been highly restricted in Jammu and Kashmir. As a result, market appreciation of property has been curtailed. Once it is opened to all, there will be a demand for purchasing properties and that may drive up prices," said Pankaj Kapoor, founder and MD at real estate consultancy Liases Foras.

The move may also attract many high net-worth individuals to the real estate market in Ladakh, Kashmir and Jammu, according to market experts.

"J&K has its attraction quotient and will drive people who are looking at second homes. We have already seen heavy demand for second homes in scenic places like Lonavala, Khandala and many others. Investors will rush to invest in the UT," Kapoor said.

(With inputs from Rajeev Dubey and Abhishek Bhalla)

Infographic: Before and after Article 370