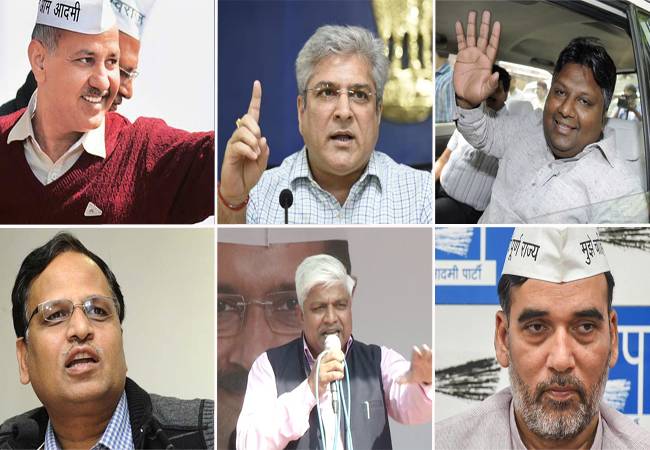 In the swearing-in ceremony of AAP Convener Arvind Kejriwal, six other ministers will also take oath today at Ramlila Maidan. The six ministers who will take oath along with Kejriwal on February 16 are: Manish Sisodia, Satyender Jain, Gopal Rai, Kailash Gehlot, Imran Hussain and Rajendra Gautam.

Gopal Rai: In the Delhi elections 2020, Gopal Rai won against BJP's Naresh Gaur in Babarpur by a margin of 33,062 votes. It was the same constituency where he won over rival BJP candidate with a margin of 36,000 votes in 2015 polls. Rai held portfolios like rural development, general administration department, irrigation and flood control and labour departments under him. He is also the Convener of the Delhi state unit of the AAP.

Kailash Gehlot: Kailash Gehlot, who was transport minister in Kejriwal's previous government, was re-elected from the Jat-dominated rural constituency of Najafgarh in this year's Delhi polls. Gahlot defeated BJP's Ajeet Singh Kharkhari by a margin of 6,231 votes in Najafgarh constituency. Apart from transport minister, Gehlot was in-charge of revenue, law, justice and legislative affairs, information and technology, administrative reforms portfolios in AAP's 2015 government.

Imran Hussain: AAP's Imran Hussain won over BJP's Lata Sodhi and Congresses' Haroon Yusuf with a margin of 36,172 votes from Ballimaran constituency in Delhi polls 2020. Hussain received 64.65 per cent of vote share in the 2020 Dehi Assembly polls. Hussain made his electoral debut and defeated his opponent by a margin of 33,877 votes in the 2015 Delhi Assembly elections. In AAP's previous government, Hussain was minister of food and civil supplies, environment and forests.

Rajendra Gautam: Rajendra Pal Gautam won from Seemapuri constituency with a vote margin of 55,942, beating Sant Lal from Lok Jan Shakti Party. Gautam won by over 50,000 votes from the Seemapri seat in 2020 Delhi polls. This was his second victory from this constituency. In 2015 Delhi Assembly elelction, he won by a hefty margin of 48,821 votes. Rajendra Pal Gautam held charges of social welfare, SC and ST, gurudwara elections, water, and registrar of cooperative societies.

The oath ceremony will take place at Ramlila Maidan at 10 am on Sunday. AAP recorded a massive victory in the Delhi elections by bagging 62 of its 70 assembly seats, leaving just eight for the BJP. The Congress drew a blank for the second consecutive time.