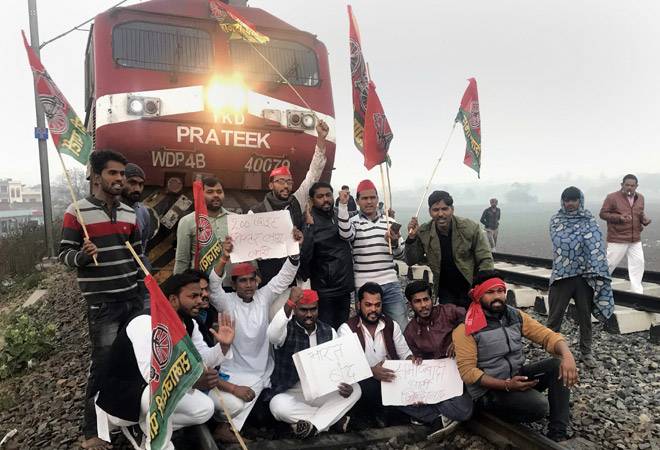 Bharat Bandh: In Uttar Pradesh's Prayagraj, workers of the Samajwadi Party have halted the Gomti train plying to Lucknow.

Several Adivasi groups have called for a nationwide bandh on Tuesday including Adivasi Adhikar Andolan, All India Ambedkar Mahasabha and Samvidhan Bachao Sangarsh Samiti. The protest includes member from Bahujan organisations as well. In Delhi, the protest began from Mandi House and will end at the Parliamentary Street. Adivasis in Gujarat, Jharkhand, Chhattisgarh, Madhya Pradesh and other states in the Northeast have also joined to call for a Bharat Bandh.

Why are the Adivasi and Dalit groups protesting?

On February 13, the Supreme Court of India ordered a forced eviction of more than 10 lakh tribes and forest dwellers across 16 states in India.

Several wildlife organisation and NGOs promoting the interest of animal rights had demanded state governments to evict forest dwellers whose claims over traditional forestlands under Forest Dwellers (Recognition of Forest Rights) Act, 2006, or, the Forest Rights Act (FRA), had been rejected.

However on February 28,  the apex court had put a stay on its order after the government's plea.

Last week, the apex court asked the states to submit details on how the tribes' claims of their land would be decided and how the competent authorities can pass the final rejection orders.

What are the demands of the Adivasi, Dalit groups?

The Adivasis have asked Centre to promulgate an ordinance to protect their forest rights. The Adivasis groups have also tabled the demand for the inclusion of SC, STs and other backward communities in the government establish Indian Judicial Services under Article 312 of the Constitution.

The Bahujan group has demanded to nullify the 13-point roaster system in appointment in colleges, universities and government organisations.  The United Grant Comission (UGC)'s new 13-point roster system, introduced this year in March, means that jobs for SC, STs and otherbackward communities would reduce.

Over 10 protesters in Bihar belonging to All India Student Association were detained by the police while stopping a train.

Moreover, a Rashtriya Janata Dal (RJD) activists stopped the Janshabadi Express going to Ranchi by firing on the railway track near Jehanabad Station.

Members of Bhim Army are also agitating on the Patna-Ranchi National Highway 31 in Nawada. Shops near major roads are expected to remain closed on Tuesday.

What do ministers have to say?

While addressing the media, Union Minister of HRD Prakash Javdekar appealed to the protesters to stop agitation and promised that they "will be given justice".

Union HRD Minister Prakash Javadekar: We have a system of 200 point roster where university is regarded as one unit but the court decided against it & directed for departmental roster. We never agreed to this position so, we filed a review petition that also stands dismissed now. pic.twitter.com/yoCEbwlru4

#5MarchBharatBandh We don't want assurance but want justice on d issue of eviction of 10 lakh tribals & similarly on d 13 point roster system in d Universities issue. This Govt is not alert, positive & pro active for social justice. To awake this Govt I support d Bharat bandh.

Akhilesh Yadav has condemned the 13-point roster system and called it an anti-reservation policy by the BJP government.