According to a statement issued by AIKSCC, over 90 per cent of public life came to a standstill in Telangana, Andhra Pradesh, Tamil Nadu, Odisha, Punjab and West Bengal while the Bandh was widely observed in a total of 22 states 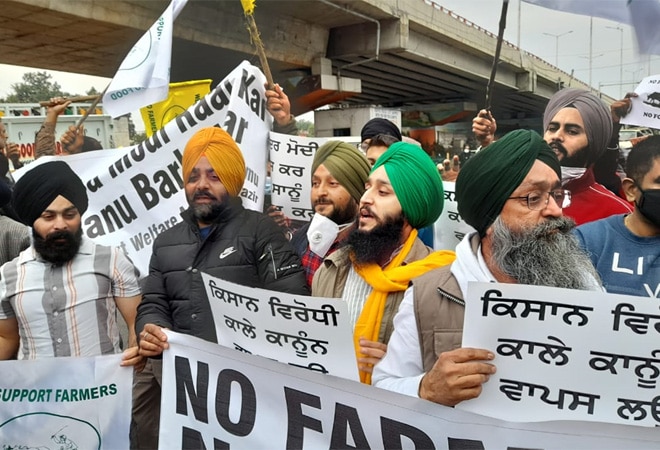 The All India Kisan Sangharsh Coordination Committee (AIKSCC) has claimed that the Bharat Bandh organised by the agitating farmers and their supporters saw 50 lakh people protesting in 20,000 centres across India today. They reiterated their demand that the three farm laws and amendment to the Electricity Act should be repealed.

"The enthusiastic response of the people of the country to the Bharat Bandh call by the Farmers Organisations, including AIKSCC, has refuted the government's claim of these laws being beneficial for the farmers and a saviour of the economy," the organisers said. They also claimed that the people have rejected the 'logic of the model of corporate-profit driven economy'.

According to a statement issued by AIKSCC, over 90 per cent of public life came to a standstill in Telangana, Andhra Pradesh, Tamil Nadu, Odisha, Punjab and West Bengal while the Bandh was widely observed in a total of 22 states including Maharastra, Bihar, Tripura and Kerala. "Most states saw massive outpouring of people in rallies and dharnas since early morning. These also included Madhya Pradesh, Uttarakhand, Assam, Himachal Pradesh, Rajasthan, UP, Haryana and others," the organisers said. They claimed that major mandis including the Azadpur mandi in Delhi and several in Uttar Pradesh remained closed and there were protests in 100 places across Delhi.

The organisers also said that the state governments of Gujarat, Uttar Pradesh and Haryana unleashed massive repression and made hundreds of preventive arrests as well as during protests. "Gujarat government even issued a gag order over social media posts. AIKSCC condemns these undemocratic steps, cautions these governments that voice of people cannot be muffled by barbaric and illegal use of state power and demands immediate release of all persons detained," the statement said.

AIKSCC counters Prime Minister Narendra Modi's attempts to defend the pro-corporate laws as establishing a new system, by stating that new system only gives direct corporate control over input prices, crop purchase, marketing and will result in takeover of farmers' land. "It is being driven by the Modi government to allow the corporates including MNCs to gain control over Indian food market," they allege.