Bharat Bandh: The meeting between Amit Shah and farmer leaders comes a day before the sixth round of talks between the Centre and farmers 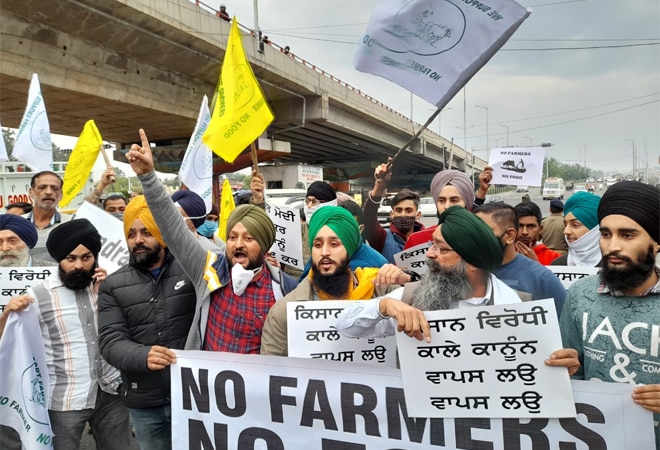 The meeting between Amit Shah and farmer leaders comes a day before the sixth round of talks between the Centre and farmers. The Union government delegation has been led by Union Agriculture Minister Narendra Singh Tomar. This also will be the first time that the Home Minsiteer will be meeting the farmers.

Meanwhile, protestors have blocked the Delhi-Meerut expressway. Agitators in Maharashtra and West Bengal have stopped trains whereas groups in Gujarat have attempted to block highways. Normal life, however, has not been impacted by the ongoing agitation in Maharashtra and Gujarat.

Get all the latest updates on Bharat Bandh at Businesstoday.in live blog:

Karnataka Chief Minister BS Yediyurappa has slammed the Bharat Bandh agitators and said that the Prime Minister would never act against the interest of the farmers. Yediyurappa said, "No one is supprting the Bandh in Bengaluru and other parts of the state. The State and Centre is pro-farmer. PM won't take any decision against farmers. It's not right to give the call for Bandh for political reasons. Police will take proper action on breaking the law." -ANI

"Govt's response to protest is a matter of concern. Legal fraternity stands with farmers. These laws are neither in favour of farmers nor of lawyers," says Tiz Hazari Bar assn pres pic.twitter.com/REjFLNB66W

Delhi Auto-Taxi Union has decided to stay away from the Bharat Bandh despite their support to the agitating farmers. The union says that the autorickshaw and taxi drivers are already suffering due to the COVID-19 crisis. Delhi Auto-Taxi Union general secretary Rajendra Soni alleged that Congress and AAP are doing politics on this.

"The auto-taxi drivers are being pressurised by the workers of both the parties since today morning to stay away from roads," Soni said. He also said that auto-rickshaws and taxis will run normally. -ANI

Farmer leaders in Maharashtra have accused the Central government of favouring corporate sector through this legislation. While these leaders condemned the Modi government for "helping corporates through such acts", they also called out Sharad Pawar for his stand on farmers and agricultural issues.

Security deployment was beefed up at Delhi-Haryana's Singhu border, which has been one of the hotspots of the ongoing farmers' protests. Additional forces of the Delhi Police, Rapid Action Force (RAF) and other security agencies have been deployed.

In view of the '#BharatBandh' call given by the #farmers, the security at the Delhi-Haryana's #SinghuBorder was beefed up on Tuesday with the deployment of additional forces of the #DelhiPolice, Rapid Action Force (RAF) and other security agencies.#FarmersProtestDelhi2020pic.twitter.com/hzcLJFkaHe

Bharat Bandh called by farmer unions and supported by opposition parties has failed to garner much response till noon in Gujarat even as protestors tried blocking highways by burning tyres on roads. Normal life across major cities of Gujarat like Ahmedabad, Rajkot and Surat has remained uunaffected so far.

In order to avoid any untoward incident, however, the BJP-led Gujarat government has ramped up police deployment and ahs also imposed Section 144 of CrPC, that prohibits a gathering of more than four people at a single spot. -PTI

The Manikarnika actor Kangana Ranaut has tweeted yet again on the ongoing farmers' protests. Ranaut unleashed her poetic side on Twitter this time.

01:05 pm: Normal life hit in Punjab and Bihar due to Bharat Bandh

Many shops and commercial establishments remained closed across Punjab in view of the Bharat Bandh called by farmer unions. Almost 3,400 petrol pumps were shut across the state.

In Bihar, railway tracks, roads and highways have been blocked as Opposition parties like Rashtriya Janata Dal and Pappu Yadav's Jan Adhikar Party have joined the bandh. In order to ensure uniterrupted movement of essential goods and services, there is heavy police deployment across the state.

A 32-year old farmer, who was protesting against the farm laws, was found dead at the Tikri border. The 32-year old who was identified as Ajay Moor, was found dead on Tuesday morning. While it is being suspected that the farmer might have died due to cold, the police has taken his body for post mortem.

Shiv Sena MP and chief spokesperson, Sanjay Raut has termed the Bharat Bandh observed by farmers as 'apolitical bandh'. While reiterating the Shiv Sena's support to the shutdown, Raut said that the central government should talk to the agitating farmers if it has a heart. -ANI

Union Ministers Smriti Irani and Prakash Javadekar have lambasted the opposition parties for extending their support to the ongoing farmers' protests as well as the ongoing Bharat Bandh. While Javadekar slammed the opposition for being hypocritical since they promised the removal of APMC in their 2019 election manifesto, Irani slammed it for trying to create 'tamasha'.

12:15 pm:TRS leaders K Kavitha, KT Rama Rao and others come out in support of Bharat Bandh

Telangana: TRS leaders K Kavitha, KT Rama Rao and others, along with party workers, protest in Ranga Reddy in support of #BharatBandh called by farmer unions against Centre's #FarmLaws. pic.twitter.com/KPAxVd0ljt

Hundreds of #Delhi Congress (@INCDelhi) activists on Tuesday staged a protest and stopped traffic near the Income Tax Office (#ITO) chowk in the national capital in support of the '#BharatBandh' called by the farmers against three #farmlaws. pic.twitter.com/MJGONsCfao

Protesting farmers have started preparing to block important roads and toll plazas today as part of thei Bharat Bandh clarion call. All India Kisan Sabha general secretary Hannan Mollah said that this Bharat Bandh is a show of strength by farmers. He further stated that their demands have found resonance across the country. - PTI

11:45 am:Traffic movement hit due to Bharat Bandh; here are the routes to avoid 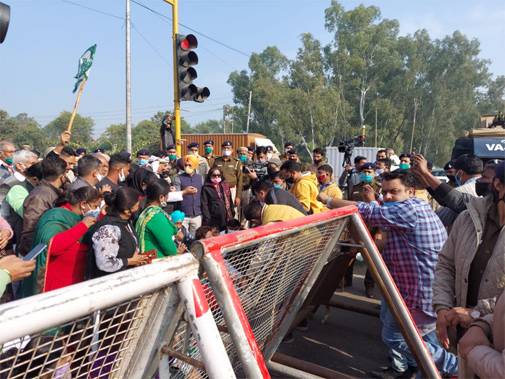 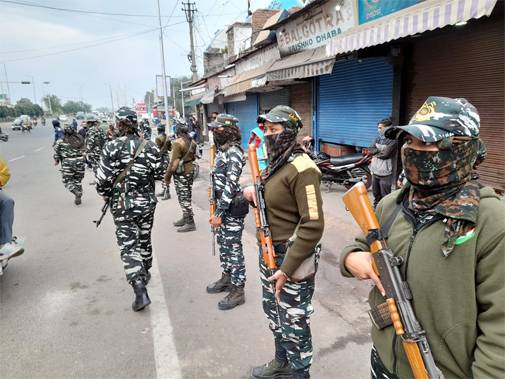 Security deployment ahead of Bharat Bandh
Click here to Enlarge

A section of auto and taxi unions have also joined the Bharat Bandh called by farmer unions protesting the newly passed farm laws. President of the Sarvodaya Driver Association, Kamaljeet Gill, has stated that they most of their members were a part of this strike.