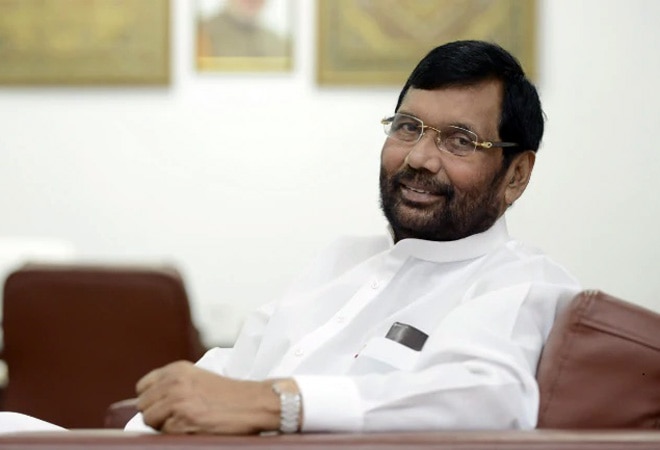 Union Minister and founder of Lok Jan Shakti Party Ram Vilas Paswan passed away at the age of 74 on Thursday. "Papa is no more in this world, but I know wherever you are, you are always with me. Miss you Papa," his son and LJP leader Chirag Paswan tweeted. He also shared an old photo of him with his father in the tweet.

The Indian politician from Bihar died in a Delhi hospital on Thursday evening. He had undergone a heart surgery recently.

Ram Vilas Paswan, eight-time Lok Sabha member and current Rajya Sabha MP, had been in active politics for more than five decades and was one of India's highly regarded Dalit leaders.

Few days back, Chirag in an open letter said that he won't be available to the party workers in Bihar where Assembly elections are due for October-November because of the illness of his father. Chirag had informed that his father was in ICU.

"Today, when I am writing this letter, I am seeing Papa fighting with the disease everyday. Very upset to see Papa in the hospital," Chirag wrote in Hindi. "Papa is sick and is in ICU. I can not leave him," he had said.

As the news of the Paswan's death spread, tributes poured in on social media.

"I am saddened beyond words. There is a void in our nation that will perhaps never be filled. Shri Ram Vilas Paswan Ji's demise is a personal loss. I have lost a friend, valued colleague and someone who was extremely passionate to ensure every poor person leads a life of dignity," tweeted Prime Minister Narendra Modi.

"Shri Ram Vilas Paswan Ji rose in politics through hardwork and determination. As a young leader, he resisted tyranny and the assault on our democracy during the Emergency. He was an outstanding Parliamentarian and Minister, making lasting contributions in several policy areas," he said in another tweet.

Shri Ram Vilas Paswan Ji rose in politics through hardwork and determination. As a young leader, he resisted tyranny and the assault on our democracy during the Emergency. He was an outstanding Parliamentarian and Minister, making lasting contributions in several policy areas. pic.twitter.com/naqx27xBoj

In the demise of Union Minister Ram Vilas Paswan, the nation has lost a visionary leader. He was among the most active and longest-serving members of parliament. He was the voice of the oppressed, and championed the cause of the marginalized.

"Ram Vilas Paswan Ji's death is a very sad news. The poor-Dalit section has lost one of its main political voices. My condolences to his family," Congress leader Rahul Gandhi tweeted in Hindi.

India's economic situation 'much worse' than ever, GDP may shrink 9.6% this fiscal: World Bank

How COVID-19 has led Raymond to relook at its business