What is the brouhaha over liquidity crunch in market; how does it affect you?

What started out as a debt default crisis at IL&FS has snowballed into a liquidity squeeze, triggering panicky outflows from mutual funds and risk aversion at large. 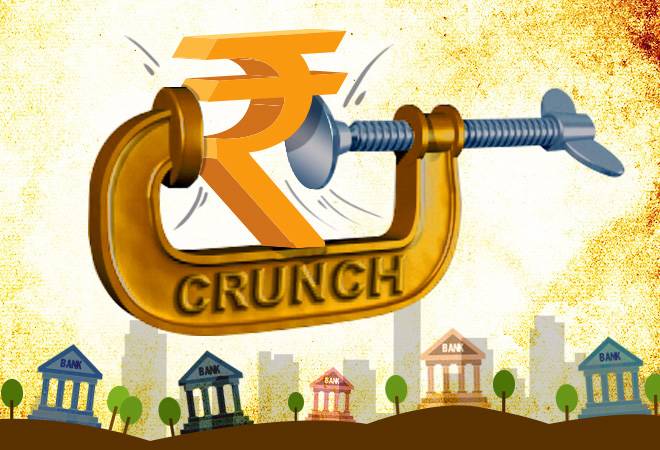 Barring the first week of October, the net banking system liquidity has been in deficit since September 11. The average daily net liquidity deficit in the banking system in the week ended October 19 had widened to Rs 96,077 crore from Rs 20,741 crore in the previous week, according to CARE Ratings. And the buzz is that the situation has worsened this week, with the cash deficit reportedly widened to about Rs 1.4 lakh crore.

What started out as a debt default crisis at the "systemically important" Infrastructure Leasing & Financial Services Ltd (IL&FS) has snowballed into a liquidity squeeze, triggering panicky outflows from mutual funds and risk aversion at large. According to a recent report by Edelweiss Securities Ltd, the recent turn of events is already creating supply-side challenges for non-banking finance companies (NBFCs), both in terms of availability and cost.

After the IL&FS crisis, the NBFCs started finding it difficult to raise funds from banks, which started hoarding cash amid fears of further defaults. That's a big deal because the brokerage firm pegs the share of NBFCs/housing finance companies in systemic credit flow spiking by about 350 basis points (bps) in the past two years and about 500bps in last four years to around 25%.

According to the RBI, "systemic liquidity in the financial system refers to the liquidity scenario in the banking sector, non-banking financial sector, the corporate sector and prevailing foreign currency liquidity". Given myriad factors like higher festive season demand, forex sales to check rupee depreciation, month end demand by importers and government borrowings, the ongoing liquidity squeeze is expected to linger for a while. "Core system liquidity is rapidly dwindling and may touch about Rs 2.5 lakh crore by March," Suyash Choudhary, head of fixed income at IDFC Mutual Fund, told The Economic Times.

So what exactly is a liquidity squeeze and why does it matter?

Liquidity squeezes occur when banks become reluctant to lend money from their reserves following global cues or a financial event that sparks concerns about the short-term availability of money. As Investopedia puts it, this hold on reserves causes the interbank market rate to rise, making it more expensive for banks to borrow from each other. This eventually causes credit standards to tighten. Meanwhile, if banks lend from their reserves but cannot replace the reserves by cheaply borrowing from other institutions, they might not meet their reserve requirements.

In India, NBFCs have been the largest net borrowers of funds from the financial system over the past few years. The proportion of mutual fund financing for NBFCs/HFCs has gone up to as high as 32-33% while the supply from banking channel has reduced to 39-44%, according to Edelweiss. Furthermore, in terms of instruments that mutual funds invest in, the proportion of short-term commercial papers (CPs) has posted a four-fold jump to 31% from 12% in FY14 in absolute terms. "We believe given the prevailing risk aversion in the system, the fund flow through (both availability and cost) for shorter duration (CPs), essentially through mutual funds will be a challenge," read its Liquidity Tracker report.

Since many companies rely on bank loans and CPs to meet their short-term obligations, the slowdown in lending has a ripple effect throughout the economy, causing liquidity crunches at a plethora of individual companies. When the lending tap turns off entirely, things spiral into a liquidity crisis.

Then, individual investors, in the face of higher interest rates, often liquidate their holdings in riskier investments. This mass liquidation exerts a further strain on the amount cash available to financial institutions, compounding the liquidity situation. Moreover, the shortage of available loans to consumers may cause a pullback in consumer spending, which if prolonged, can hamper economic growth.

Although no official data has emerged since the beginning of the tightening of lending rates last month, anecdotal evidence suggests that the sale of motorcycles, tractors, plywood and cement have all slowed in the past few weeks with consumers postponing purchases. Worryingly, earlier this week, Digjam Ltd, one of India's biggest exporters of woollen and worsted fabrics, announced the temporary closure of its Jamnagar mill "in view of extremely tight liquidity and working capital position".

So economists are reportedly pencilling in a drop of a few basis points in the economic growth figure for the December quarter should the hoarding of cash by banks and mutual funds continue threatening on-lending NBFCs, the lifeline of lakhs of medium and small enterprises. The Survey of Professional Forecasters conducted by Reserve Bank of India showed that GDP growth for Q3 and Q4 are likely to be in the lower end of 7-7.5% range.

It does not help that NBFCs are reportedly staring at short term debt repayments worth Rs 1.2-lakh crore in the current quarter. And if they end up diverting their incoming cash flows to service the outstanding debt, it will likely impact their ability to continue fresh lending operations, which again fans the liquidity situation.

The RBI's measures to address the problem, unfortunately, aren't helping enough. Though it bought bonds worth Rs 36,000 crore in October - against about Rs 30,000 crore in the three months ended September - it had little impact since the regulator is also buying dollars to keep rupee depreciation in check. For the record, OMO (open market operation) purchase is a mechanism to infuse or suck out cash from banking system.

In the five months between April and August, the RBI sold $18.6 billion in the currency spot market to try and prevent the rupee's slide against the dollar. In fact, given that the central bank has to buy rupees and convert it into dollars before currency intervention, this has likely only worsened the cash shortage in the system.

Then, on Friday, the apex bank allowed the banks to use government securities equivalent to their incremental credit to NBFCs for a three-month period to meet their liquidity coverage ratio (LCR) requirements. Moreover, the single borrower exposure limit for NBFCs that do not finance infrastructure stands increased from 10% to 15% of capital funds, up to December 31, 2018.

This is "over and above the amount of credit to NBFCs and HFCs outstanding on their [banks'] books as on October 19, 2018," the RBI had said. Liquidity coverage ratio refers to highly liquid assets that financial institutions need to hold in order to meet short-term obligations.

The provision is expected to allow banks to free up Rs 50,000-60,000 crore of liquidity which banks can lend to NBFCs till year-end. However, the move was downplayed by industry players, and analysts described it as too little and too late. According to them, the only beneficiaries will be those into short-term consumer loans as well as micro-finance loans.

Because of all the above, the Centre had been mulling the need for a special liquidity window, but the RBI has reportedly ruled that out on grounds that there is no systemic risk as of now. "The regulator does not want to make an across-the-board intervention. Only about 200 of the over 11,000 NBFCs in the country are deposit-taking, so there is no systemic issue," a person aware of the development told The Business Standard.

Edelweiss backs the apex banks view. "It must be highlighted that the interbank overnight call rates have been close to the repo rate throughout, even during periods of sizable liquidity tightness," read its liquidity report. "This suggests that, unlike earlier periods of persistent liquidity tightness, the current episode might not be systemic or durable as call rates have barely shown any meaningful uptick even on days of strain."

According to the brokerage firm, a close look at the growth profiles of NBFCs/HFCs shows the disruption on the supply side amid tight liquidity will affect business segments like housing, SME loans, real estate financing, auto loans, among others. "While it is difficult to ascertain numbers by business segment at this juncture, we understand a slowdown in housing finance, MSME and real estate financing, which account for >50% of overall NBFC/HFC exposure, will moderate NBFC/HFC growth," it added.

In a similar vein, the State Bank of India believes the "recent hullaballoo over the happenings in the financial market is a little unwarranted". In its recent Ecowrap report titled NBFC - From Shadow to Spotlight, the bank also pointed out that "given the current backdrop in NBFC space, nothing much has changed in the financials of the sector per se and hence the concerns in the market may be a little overblown. The decadal rating transition matrix shows 98% NBFCs rated as AAA. Further, overall the asset quality and CRAR looks better than previous year."