A giant feast took place in the heart of Mumbai amid a national lockdown. One of India's top ice-cream makers had given away 26 tonnes of their best product for free. But, those consuming the ice-cream weren't sugar-craving humans Sanjeevani S3, one of the rare wet disposal plants in Mumbai helped in disposal of the ice-cream

Thangaraj Nadar stood outside the factory gate, waiting for the truck to arrive. The temperature was a warm 32 degrees celsius. Soon enough, screeching brakes announced the entry of a small container truck. Inside was a tonne of ice-cream -- sweet mango, roasted almond, tender coconut, fig.  For the next few hours, Nadar and four other workers had just one task at hand: Opening the smaller 500 gram ice-cream containers and transferring their contents into a larger one.

Twenty-six tonnes of ice-cream, packed in over 45,000 small boxes, had been lying in cold storage for 35 days at the Naturals' Factory in Mumbai. Maharashtra government's notice on 19th March announcing a lockdown in the state from the next day had caught Girish Pai and Hemant Naik, the top executives at Naturals Ice Cream, completely off guard. Ever since coronavirus cases had emerged in the country, the demand had been on a decline. They had regulated the production process at the factory accordingly to avoid wastage. But the suddenness of the announcement meant they did not know what to do with the ice-cream that had already been manufactured.

"We don't have a policy of rework if the stock expires. Being a dairy product we can't do anything about it. We had to throw away the ice-cream. That was the only option. These were packaged ice-creams. Nobody knew we were going into a lockdown. Moreover, we never expected Maharashtra to announce the lockdown before the centre. It was too sudden," says Hemant Naik, Vice President Supply Chain & Strategy, Naturals Ice Creams.

The first management decision at Naturals was to check if they could give away the ice-creams to the poor before they expired. They reached out to the Brihanmumbai Municipal Corporation and the local police. But, the first phase of lockdown saw strict implementation and there was lack of clarity over vehicular movements.

"Only essentials were allowed, other goods were not permitted. We reached out to BMC, we reached out to police. Everyone said till the time the next input comes we are not in a position to do anything. But by the next input was issued, our products would have expired," says Girish Pai, Director, Naturals Ice Creams.

As the days passed, Hemant and Girish started discussing disposing of the ice-cream. Throwing them in the gutter or asking the BMC to take it away were some of the options, but the quantity was too huge. 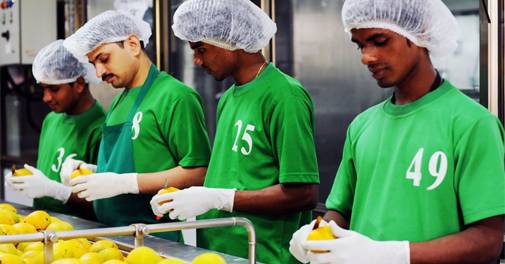 "It was not like 10 kgs of sample we'd dispose of through wet waste managers of municipality. If 26 tonnes of ice-cream goes in a normal drain, the ice-cream which has so much of protein, so much lactose and fat, it will choke the gutter. Then there's the packaging, of course, which is a reusable  resource. We did not want to put it in a landfill. We wanted to work with someone who could do justice to both these items," says Naik.

Naik and Pai finally decided to reach out to Sanjeevani S3, one of the rare wet disposal plants in Mumbai.

Located in the Malad (W), Sanjeevani S3 sees 2,000 kgs of wet waste disposal every day. Zulkif Shaikh, the co-founder of the plant, is an M.Tech (Green Technology) from Institute of Chemical Technology, Mumbai. He started the plant with a couple of partners at his father's 5,200 sq ft area in 2015. There's an unmissable exhilaration in his voice, stemming from his love for science, as he starts to explain a complex process -- to the uninitiated -- of getting rid of the ice-cream, which involves transforming it into biogas with the help of bacteria. Essentially, bacterias or microbes will consume the ice-cream and release biogas, which will later be burnt away.

But, the process is not simplistic and takes time.

"I told Naturals to first send me small quantities of ice-cream, so I could study how the microbes would react and the amount of biogas it would produce. It typically takes about 24 hours for the waste to be converted into gas," he says.

A percentage of the waste also gets converted into compost.

"A combination of bacteria in our digester converts the ice-cream into gas. Liquid content is high (typically 60-65%) in wet waste and if the waste has fruits, it can go up to 90-95%. The end products of the disposal process are biogas and compost. Compost typically constitutes 10% of the end product. But since there's nothing solid in ice-creams, very little compost gets produced. Most of the ice-cream gets converted into gas," he says.

But before the bacterias work their magic, Nadar and other factory workers at Sanjeevani S3 have their task cut out. They must finish unpacking the ice-creams and pour it into a feeder - in the first of the three-step process. Typically, they would first put it in a pulveriser so that the waste can be reduced in size for the microbes to feed on them conveniently -- in scientific term, the process is called hydrolysis, which means breakdown of a compound due to reaction with water. But since ice-cream would simply melt, this step was not necessary.

So, the workers put the half-melted ice-cream straight into the feeder, which is an open container connected to what's called a feeding pump. An equal amount of water is added to the mix to dilute the ice-cream and control it's acidity -- a crucial factor which will later decide bacteria's reaction.

"We put ice-cream and water in 50:50 ratio because ice-cream is semi-solid. The microbes are fed in three intervals. Sugar directly converts into acid. If we don't dilute the acid, and feed in intervals, the microbes can get a shock," explains Zulkif. 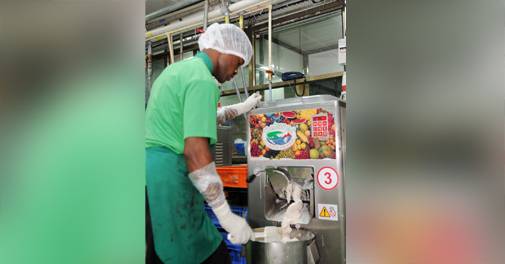 By shock, Zulkif means if ice-cream's acidity is not monitored, the high acid ratio can kill the microbes. And, it's very expensive, plus time consuming, to replace them. "They are living beings in the end. They have their own way of growing. We just need to keep them happy by maintaining the temperature, not giving them shock," he says.

"The nature of bacteria is such that if one strain of bacteria gets to dominate the other, it'll eat up the other bacteria. Just like big fish eat small fish -- it's the same with bacterias," explains Zulkif.

Things get even more interesting here because the bacteria's efficacy in breaking down the waste depends on the acidity of the waste. In the case of ice-cream, the microbes just devour it, says Zulkif.

"The gas constant, or the amount of gas produced, is around 100-110m3 per tonne for normal wet waste, but with ice-cream we get 220-250m3 per tonne. It's a very good substrate for biogas plant," he explains.

The reason the gas output is double is that much like humans, bacterias also relish sugar. "They are very happy consuming sugar. That's why you see a huge change in the amount of gas they produce when they are fed ice-cream," adds Zulkif.

But, the process comes with its own set of challenges.  Since ice-cream also contains fat, it takes time for bacteria to recover after consumption. This was one of the reasons the disposal process took longer. "It takes time for microbes to consume oil and fat. We asked Naturals two days' gap per week so that our microbes consume could recover after consuming the extra fat," says Zulkif. So, the entire process of getting rid of the 26 tonnes of ice-cream took Sanjeevani S3 and Naturals more than 40 days.

Once the bacteria consumes the waste and releases methane, the gas is burnt away. "We flare the methane that gets produced. It keeps burning. That's the end. Ice-cream has been turned into fire," says Zulkif.

But, Zulkif says these words with a sense of regret. He explains that it's a waste of energy because, ideally, the methane can be converted into cooking gas or electricity.

Had the facility been even more advanced, it could have powered 30 homes in any slum of North Mumbai for a month.

"Unfortunately, the gas is not getting reused due to the infrastructural limitations at our plant. Else, it can be converted into electricity. 100m3 gas is equivalent to two-and-a-half LPG cylinders. The 26 tonnes of ice-cream was converted into approximately 52,000m3 methane. To put it in perspective, that would equal to 1,040 gas cylinders or 6,240 units of electricity. The wastage is a problem for me as a company. I should ideally be able to monetise it," says Zulkif.

Back at Naturals, Hemant too rues the financial losses beyond the fact that such large quantity of edible items had gone waste. The wastage of the entire stock had cost the company approximately Rs 2 crore. But, that's just the tip of the iceberg in the ice-cream industry that has seen a complete crash in revenue since March this year.

The market size of organised branded ice-cream industry in India is about Rs 10,000 crore, according to Pradeep Pai, MD of Hangyo Ice Cream, and a senior member of the Indian Ice-Cream Manufacturers Association (IICMA). An equally large size unorganised industry also exists. "There is a psychological fear towards cold drinks and ice-creams. Nobody wants to run the risk of catching a cold amid coronavirus," says Pai of Hangyo Ice Cream.

Industry expects the sales to remain muted the whole of this year. "There will be more than 50% drop in consumption till December. In our company (Hangyo), sales in the first quarter is just 30% compared to the same period last year. It looks very bad. Once there is no cash flow, it's difficult to run operations," Pai adds.

More than the organised ice-cream makers, it's the unorganised player who are devastated, according to industry insiders.

"Unorganised ice-cream sellers are badly hit. 90% are shut. Small units cannot sustain this blow. It will be very difficult for them to make a comeback," added Pai.

Interestingly, many ice-cream makers are launching immunity-boosting ice-creams in a last ditch effort to revive sales.

Chywanprash, Haldi (Turmeric), Isabgol, Wheatgrass, Lemon & Ginger are some of the flavours that have hit the market. "Ice-cream industry is trying to get as close to the consumers as possible. The response is positive. Lot of people are trying these flavours," says Pai, whose Hangyo ice cream has launched the Isabgol and Wheatgrass flavours.

Also read: BT Buzz: Govt slack on National Vaccination Plan; companies wonder how much to set aside for India!