The Union Cabinet on Wednesday approved the National Education Policy 2020 (NEP) to set the direction for reforms in the school and higher education for the next 20 years. The new policy replaces the 34 years old National Policy on Education (NPE), 1986.

The focus of the NEP 2020 very clearly is to improve the quality of the learning. This is a big shift from NPE, 1986 where the focus was to massify education and drive access. At that point in time, enrolment rates in schools and higher education were quite low.  Now, according to World Bank, India had almost universal enrolment in elementary school by 2018 and almost 75 per cent enrolment in secondary school.

"Earlier the true north for the education policy was to improve access and equity in education. Now, NEP 2020 provides a true north in laying down directions to fix school education," says Ashish Dhawan, Founder and Chairman of Central Square Foundation (CSF) and a Founding Member of Ashoka University. 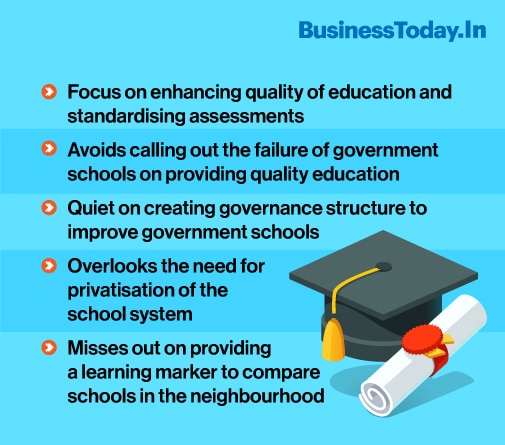 Dhawan says the two key takeaways from the policy are: the setting up of the National Mission to improve foundational skills at primary school and reducing the stakes of the Board exam. "Board exams are big in the Indian school system as it has a huge trickledown effect into middle school," says Dhawan. The Boards focus on rote due to which even middle schools align themselves with rote learning. "This will be a signal to change the school learning in its entirety," he adds.

Another is the setting up of 'National Mission on Foundational Literacy and Numeracy' and the plan for the states to prepare an implementation strategy to attain universal foundational literacy and numeracy in all primary schools by 2025.

The World Bank's report estimates that India has over 50 per cent of learning poverty, suggesting that one in two students at the late primary age lack basic reading and numeracy proficiency. "If children fall behind early on in school, it flattens their learning trajectory. They may be enrolled in school, but they will not be able to grasp the curriculum," says Dhawan.

"Setting up the National Mission to my mind is one of the biggest reforms envisaged in the NEP 2020. It is mission mode, concrete and offers a specific goal to achieve by 2025," he says.  He adds that it is a well rounded recommendation because National Mission is complemented with the setting up of the assessment body National Assessment Centre, PARAKH (Performance Assessment, Review, and Analysis of Knowledge for Holistic Development) whose primary task will be to lead the shift from summative assessment to scientific testing of higher order skills, such as analysis, critical thinking, and conceptual clarity.

PARAKH will set the move away from writing long answers and will change how kids are taught in the school. "Modernisation and standardisation of testing are much required which is otherwise chaotic in the country. Every state board has its own standards of assessment and there is no uniform way to compare learning outcomes," says Akshay Saxena, Co-founder of education startup Avanti Learning Centres.

"This system will particularly be beneficial for the elite and the good private schools. The flip side will be for the government school where classroom teaching is still not standardised and quality is a concern," says Saxena.

He explains that this is because the new system is likely to be biased towards technology. Kids with English speaking parents and a smartphone at home will be at an advantage. "If not implemented well this system with its bias for technology has the potential to increase inequity among school children," he says.

"If the policy has to succeed, the government will have to build capacity of the public schools and equip them with the necessary digital infrastructure," adds Saxena.

But, the policy is innocuously silent on the lack of quality in the government schools and doesn't suggest ways to improve their performance.

An education expert who spoke on the condition of anonymity said that the policy doesn't address the issue of governance in the public school system. The enrolment share of government schools has fallen from 74 per cent in 1978 to 53 per cent in 2017. Nearly 50 per cent students today attend private schools and the reason for that is the government schools don't offer quality education. "There seems to be lack of acceptance that the public school system has failed and there is a need for a governance mechanism to make them accountable," he says.

The policy also doesn't mention opening up the education sector to private players. "The policy has been clear that privatisation of education is not welcome. For any industry to boom and to create opportunities for employability for our youth, private industry participation is needed and will help create a similar boom like what the technology sector has done for the IT sector," says Rustom Kerawalla, Chairman, Ampersand Group.

Experts say that it is common knowledge that private schools work like an enterprise and structure themselves to make money through other forms. The government seems to be in denial of this reality and is stuck with the idea that private schools should be non-commercial. This creates incentives to cheat and prevent quality people from getting into the sector, they say. When 50 per cent of the school children are in private schools today, there is a need to get away with the socialist mindset.

Aekta Nandwana Chanda, Technical Specialist Education at ChildFund India says that treating extra curriculum activities such as arts and sports as an integral part of the education will help in holistic development of the child. Also, integrating local artists and knowledge into the education system will help students connect with their community better. "But we have to see how it will manifest and gets implemented in schools," says Chanda.

Rukmini Banerji, CEO of Pratham Education Foundation says that it is best to start with the concrete policy recommendations given in the policy such as upgradation of the Kasturba Gandhi Balika Vidyalaya to 12th grade, and setting up of special education zone for disadvantaged regions and move ahead with their implementation. "This is a good year to make changes. Normally, everyone is on a treadmill, right now there is a punctuation mark. Before the next school year begins we can utilise this time to develop the frameworks to get these recommendations on the ground."

BT BUZZ: How Indian consumers are going the extra mile to build immunity