In the last Budget, its fiscal deficit target for 2019-20 was revised to 3.3 per cent from the earlier 3.4 per cent, which seems unattainable now due to deficient tax revenue 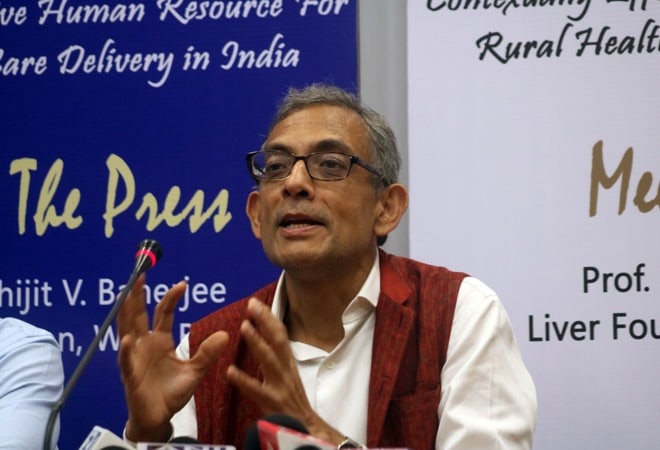 Nobel laureate Abhijit Banerjee has said that he would not suggest incorporating fiscal tightening measures in the upcoming Budget as the fiscal deficit target has been breached by a huge margin already. Finance Minister Nirmala Sitharaman will present her second Budget on February 1 amid a persistent economic slowdown.

"Fiscal deficit has been breached by a huge margin already. In that sense, I don't think that it's a big deal to breach it more. I wouldn't be supporting fiscal tightening right now," Banerjee said at an event in Mumbai.

In its last Budget, the government had revised its fiscal deficit target for 2019-20 to 3.3 per cent from the earlier 3.4 per cent. A shortfall in direct and indirect tax collections and overall diminishing revenues have made it difficult to achieve this target. The corporate tax cut announced last year is further expected to dent tax collections by Rs 1.45 lakh crore.

Keeping in mind its fiscal deficit target, the government has stayed with the borrowing plan for the fiscal as announced in the Budget. Notably, some states have asked Sitharaman to go for fiscal expansion and relax the deficit target to 4 per cent of the GDP in order to boost consumption.

Some experts have already predicted that the fiscal deficit is expected to rise to 3.6-3.8 per cent of the GDP during the current fiscal due to weak revenue collections resulting from sluggish economic growth and government's sweeping corporate tax rate cut.

The government will reportedly ask the Reserve Bank of India for a fiscal lifeline in the form of another interim dividend, as it struggles to meet its expenditure commitments due to steep revenue shortfall. If agreed, it would mark the third straight year in which the RBI has agreed to give the government an interim dividend.

Talking about Centre purported plan to cut school education budget by Rs 3,000 crore, Banerjee said, "The federal government provides very little of the funding in education. Education is a state subject, and it is mostly funded by states. Cutting Rs 3000 crore is like a drop in the ocean."

NMDC set to mine multibillion-dollar diamond deposit in Madhya Pradesh