VG Siddhartha missing: In the letter Siddhartha has said that he fought for a long time but eventually gave up as he could not take any more pressure. VG Siddhartha, the founder of popular Indian coffee chain Cafe Coffee Day, has been missing since Monday evening. He was last spotted at the Netravati dam site. However, in a letter, purportedly Siddhartha's suicide note addressed to CCD board members and employees, he has apologised and said he had given his all to the business. "I would like to say I gave it my all. I am very sorry to let down all the people that put their trust in me," read the letter.

However, the signature in the letter appears to be done in a hurry and does not match with his signature on Cafe Coffee Day's annual report. That raises a host of question marks regarding the authenticity of the letter. Or, was it due to the mental stress that the businessman was under and a host of other factors? 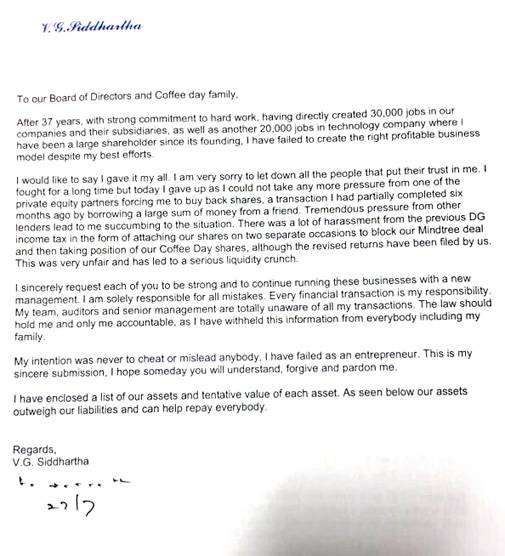 In the letter Siddhartha has said that he fought for a long time but eventually gave up as he could not take any more pressure. "I sincerely request each of you to be strong and to continue running these businesses with a new management," the letter read.  He also said that he is solely responsible for all the mistakes. "Every financial transaction is my responsibility. My team, auditors and senior management are totally unaware of all my transactions," further states the letter undersigned by him.

Siddhartha was accompanied to the Netravati dam site by his driver who has said that when the CCD founder did not return for an hour, he tried looking for him. The driver also said that Siddhartha was talking to someone when he got off from the car. The Karnataka Police have launched a massive search operation in the area.

The company issued a statement and said, "This is to inform you that, Mr VG Siddhartha, Chairman and Managing Director of Coffee Day Enterprises Limited, has not reachable since yesterday evening. We are taking the help of concerned authorities. Company is  professionally managed and led by competent leadership team, which will ensure continuity of business (sic)."

Your electricity bills may shoot up from August; here's why