Coronavirus Lockdown I: Who and how many are vulnerable to COVID-19 pandemic

It is not difficult to identify the vulnerable-landless labourers, petty traders, tailors, barbers, construction workers, rickshaw/auto/Ola/Uber drivers and many others, nor is to reach them after the Jan-Dhan and Aadhaar programmes 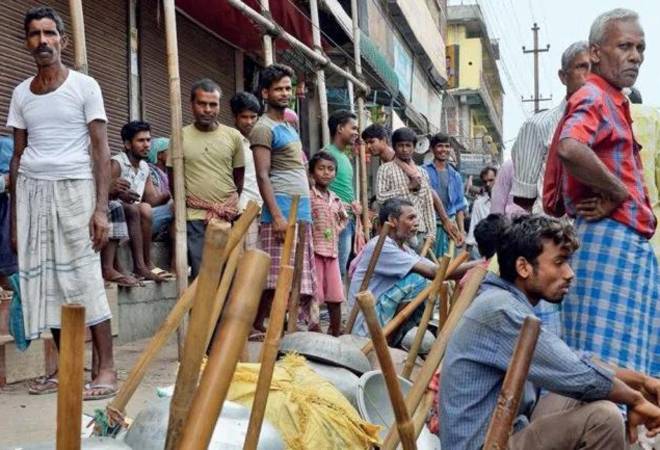 While several state governments have taken several measures on their own but given their tight fiscal conditions and the magnitude of the problem, the Centre needs to step in

With the entire country under a social and economic shutdown until April 14, this could be a very trying time for those who survive on daily labour.

In absence of reliable data, it may be tough to number them, but not identify those whose livelihood would have been seriously jeopardised because of the lockdown. They include landless agricultural labourers, petty traders, tailors, barbers, construction workers, rickshaw/auto/Ola/ Uber drivers and many others.

These workers need government support to survive the crisis. Some of the states have announced various measures, including cash transfer, PDS, food supply, etc. but going by the anecdotal evidence in Delhi and elsewhere and the plight of millions of inter-state migrant workers a lot more needs to be done. But before that here is a back-of-the-envelope estimate of the vulnerable.

Who and how many are vulnerable

India's total workforce stood at 465.1 million in 2017-18, as per the Azim Premji University's 2019 study based on the unit-level data that the Periodic Labour Force Survey (PLFS) of 2017-18 provided. According to the ILO statistics (based on Government of India data), the share of agriculture in India's total workforce was 43.9% in 2018. That would be 204 million.

The rest are employed in non-agriculture sectors like industry and services.

How many are vulnerable in rural India?

Of the total agricultural workforce in India, 45.1% are cultivators (farmers with land or self-employed in agriculture) and the rest 54.9% agricultural labour (or landless), as per the Pocket Book of Agricultural Statistics of 2017.

This would mean there are 92 million cultivators (45.1% of 204 million), who are better placed and benefit from the PM-Kisan scheme providing Rs 6,000 every year to such families. But the rest 112 million landless agricultural labour are vulnerable. This isn't a harvesting or sowing season, nor is any possibility of the rural employment guarantee scheme (MGNREGS) work coming to their rescue anytime soon.

These workers can be clubbed into three: (i) self-employed and professionals like doctors, lawyers, chartered accountants etc. (ii) regular wage earners and (iii) daily wage workers.

How many self-employed in non-agricultural sectors are vulnerable?

How many are regular wage earners and daily wagers in informal non-agricultural sectors?

Deduction of 91.4 million of self-employed from the 242.6 million in the informal non-agricultural sectors would leave 150.6 million of regular wage earners and daily wagers. They are the vulnerable ones.

That is because most of the establishments are closed and hence it is more likely that regular wage earners in the MSME sector would have lost their jobs too. This is clear from several newspaper reports in the past few days in which various MSME associations point to a collapse of economic activities and seek government assistance package to ride over the crisis. This crisis may have been aggravated by the coronavirus fear but has been long in the making as the economy went into a tailspin.

Migrant workers are the 'most vulnerable'

These 308.3 million would include about 9 million inter-state migrant workers (calculation of the Economic Survey of 2016-17, based on the Railways' passenger data).

Mohanan says they are the most vulnerable of all daily wage workers. Many have gone back to their home states and many others are stranded across the country without work or support.

What central government could do

While several state governments like Kerala, Delhi, Odisha, Bihar, Rajasthan and Uttar Pradesh have taken several measures on their own but given their tight fiscal conditions and the magnitude of the problem, the Centre needs to step in.

So far the Centre has focused on providing relief to the industry. For the vulnerable population, Finance Minister Nirmala Sitharaman tweeted on March 23 that the central government "has agreed to the Food and Public Distribution Department's proposal that food grain for 3 months can be lifted by states/UTs on credit from FCI".

Mohanan suggests two measures for at least next two months: (a) free PDS supply to all who demand it (he says Kerala is giving it free to both BPL and APL families) and (b) targeted cash transfers to wage labourers, particularly the migrants, for their survival as well as boosting demand in the economy.

Prof KR Shyam Sundar, labour economist at the Jamshedpur's XLRI, also bats for a temporary direct cash transfer programme for the vulnerable segments of the workforce, in addition to a host of other measures that include food support, safety gears and hardship allowances to those essential services and other social support.

Chandan Kumar, trade union leader and a member of the National Minimum Wage Advisory Board of the Government of India, warns that unless PDS supplies are ensured immediately, there could be starvation deaths. He also appeals for at least a month's minimum wage or Rs 10,000 to the poor through their Jan-Dhan accounts. Moreover, he says, it is very important to provide homeless and slum dwellers in urban and peri-urban areas with basic healthcare immediately to prevent a potential disaster that a virus contamination can cause in such areas.