The falling credit flow shows the subdued activity in the economy. The gross domestic product (GDP) had already fallen to a low of 5 per cent in the first quarter (April-June) of 2019/20 Reflecting the severe slowdown in the economy , the total flow of funds from banks and non-banks that include public issues, commercial papers (CPs), external commercial borrowings (ECBs) and foreign direct investments (FDIs) has crashed by 87.63 per cent to Rs 90,995 crore over the  first six months (April-September)  of 2019/20. The credit flow decline is drastic as it fell from Rs 7.36 lakh crore for the corresponding period of 2018/19, according to the Reserve Bank of India's (RBI) monetary policy report.

The falling credit flow shows the subdued activity in the economy. The gross domestic product (GDP) had already fallen to a low of 5 per cent in the first quarter (April-June) of 2019/20. Meanwhile, the RBI has also revised downwards its GDP forecast from 6.9 per cent earlier to 6.1 per cent for 2019/20. It had earlier projected the GDP in the range of 5.8-6.6 per cent for the first half (April-September) of 2019/20. However, the first quarter's actual figure came out at 5 per cent.

So, what all contributed to such a steep decline in the flow of funds to the commercial sector?

Banks bring a big chunk of funds for the commercial sector.  Over the first six months of 2018/19, the flow of funds stood at Rs 1.85 lakh crore.  There is a negative flow of Rs 1.28 lakh crore for the current six months of 2019/20. It shows the funds have gone back to banks because redemptions were higher than loans extended during the period.  The RBI report also says that the slowdown in the bank credit was led by public sector banks (PSBs). The PSBs have been facing deterioration in the asset quality, while the private banks are cautious in lending to large projects or infrastructure companies. 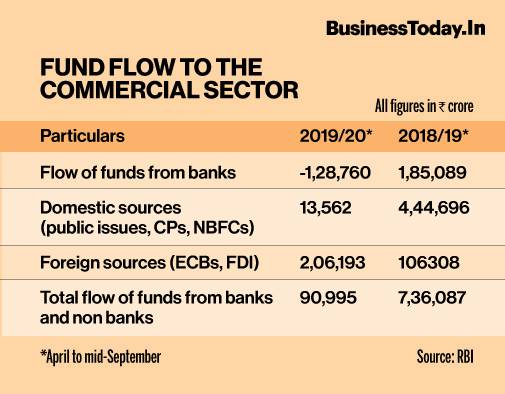 The commercial papers (CPs) that were a major source of funds for the corporate sector including NBFCs have also witnessed a steep decline.  Take, for instance, the CP issuance fell from Rs 2.53 lakh crore in 2018/19 to Rs 19,118 crore in 2019/20.  The investors such as mutual funds, insurance companies and HNIs are cautious in parking money in CPs. In addition, the CP rollovers that were common during pre-IL&FS phase are also shut.

As the bank credit and CP market are shut for NBFCs, the fund flow from NBFCs has also turned negative.  It has fallen from Rs 41,200 crore in 2018/19 to negative Rs 1,25,600 crore in 2019/20. This negative flow reflects in the numbers of many sectors, especially two-wheeler and three-wheeler that NBFCs had been supporting in the past.  They also supported the non-salaried segments, especially self-employed people or those with irregular income.