Reality Check: RBI data on fund flows through various channels raises serious questions but no answers as the regulator does little beyond compiling data. Reality Check: Though round-tripping is a serious concern, there is very little study on it, least of all by the RBI.

The RBI brought the focus back on round-tripping of funds by a mere restatement of the existing regulations on overseas direct investment (ODI) when on September 19 it issued afresh 'Frequently Asked Questions' (FAQ) making it clear that an Indian company can't acquire stakes in an offshore firm which has already invested in an Indian entity "under the automatic route".

This provoked a volley of protests from the corporate world, warning that this would adversely impact genuine investments while ignoring the fact that this was aimed at minimising round-tripping of funds or that the RBI had also added that it could be approached for approval for such a transaction on merit.

Focus on round-tripping of funds

The protest was apparently because regulators and enforcement agencies like the RBI, SEBI and ED are investigating many round-tripping and other violations of ODI regulations. The RBI compounded one such contravention in April this year and is probing eight more cases. Two years ago, the SEBI had slapped 22 entities with a fine of Rs 17.55 crore for round-tripping.

The industry and banking sector, however, are dismissive of the menace. The CII's chief economist Bidisha Ganguly says the FDI outflows are not very large and declining over time, so there is nothing to worry from the macroeconomic view. The SBI's group economic adviser Soumya Kanti Ghosh says round-tripping is a universal phenomenon and well known. He desists from commenting further saying he has not studied the phenomenon.

But there is more to it than what meets the eye.

A simple analysis of the RBI data on FDI inflows and outflows shows that except for some years (FY11, FY15 and FY18), both are going up and down in a synchronised motion. The same can be noticed in their growth rates too. 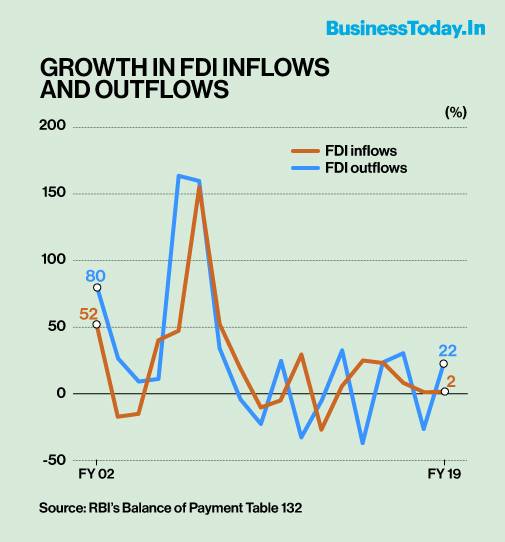 Incidentally, a 2016 study of emerging economies by the Washington-based Peterson Institute for International Economics had found a similar phenomenon.

It studied 25 emerging economies including India, using quarterly data for the period between 1990 Q1 and 2015 Q4, and came to the conclusion that "FDI inflows and outflows are highly correlated, even at high frequency and using different methodologies".

It found India among eight countries with a higher correlation (about 0.7 for India when the average correlation was 0.51), reflecting "in part hedging of currency and country risks by foreign investors".

Prof R Nagaraj of Mumbai-based Indira Gandhi Institute of Development Research (IGIDR) says, "If there is merit in such an argument (high correlation), then such capital flows do not help emerging markers to augment their productive capacities and output growth."

Another study, by the IMF and University of Copenhagen, released this month warns of the growing "phantom investment".

The study says: "Globally, phantom investments amount to an astonishing $15 trillion or the combined annual GDP of economic powerhouses China and Germany." This is almost 40% of the total $40 trillion in FDI channelling around the world - up from a little over 30% a decade ago.

Further, it finds more than 85% of all phantom investments is hosted by well-known tax havens of Luxembourg, the Netherlands, Hong Kong SAR, the British Virgin Islands, Bermuda, Singapore, the Cayman Islands, Switzerland, Ireland and Mauritius.

A bulk of India's FDI inflows and outflows are routed through these tax havens.

Mauritius, Singapore and the Netherlands account for 32%, 20% and 7%, respectively, of the total FDI inflows to India from April 2000 to June 2019, according to the Department of Industrial Policy and Promotion (DIPP).

The tax havens are also the favourite destinations for the outward FDI (OFDI) - as a study by the Indian Institute of Foreign Trade (IIFT) for the period of FY08 to FY15 and RBI's latest Census on Foreign Liabilities and Assets of Indian Direct Investment Companies (2017-18) show.

Prof KS Chalapati Rao of the Institute for Studies in Industrial Development (ISID) provides an estimate of round-tripping and the role of tax havens. He says his 2011 study estimated that about 19.5% of the total FDI inflows during September 2004 to December 2009 could be prone to round-tripping: India-related investors - 10.3%, India-related Private Equity - 4.0% and NRIs - 5.2%.  These investors exploited the tax haven route far more than genuine FDI investors, he adds.

Growing inflows of 'Other Capital' and 'Private Transfers'

A 2003 UNCTAD study had pointed fingers at 'other capital' (capital account) 'private transfers' (current account) inflows as the possible channels for "return of flight capital" - another name for round-tripping. Both show an unusual surge.

According to the RBI, 'other capital' inflows include leads and lags in exports, SDR allocation, funds held abroad, advances received pending issue of shares under FDI and other capital not included elsewhere. This too shows a remarkable rise, reaching $73 billion in FY19 - when the total FDI inflow was $62 billion. In absence of more recent studies it is difficult to decipher what is going on but the huge surge and the large sums do call for scrutiny.

The total OFDI that fiscal was $15.4 billion. The disaggregated data show the top items being travel, studies abroad, maintenance and gift. This may indicate prosperity of Indians or may not. Who knows what the statistics hide?

No OFDI strategy, no analysis or monitoring by RBI

Though round-tripping is a serious concern, there is very little study on it, least of all by the RBI. Analysis of relevant data should be the first step for identifying the channels, modus operandi and the dynamics which may have changed or are changing but the RBI - the regulator - has shown little appetite.

Besides, Prof Rao says the RBI's attempt to curb round-tripping through FDI/OFDI routes is extremely inadequate as it focuses on subsidiaries while ignoring minority equity participation. The compounding cases under the Foreign Exchange Management Act of 1999 (FEMA) do indicate non-reporting or delayed reporting by many, including large companies, for both FDI and OFDI.

He also points out that extension of the automatic route to OFDI leaves little space for monitoring the investments, especially when they go into holding companies and into tax havens.