RBI claim seems partially 'correct'; while it'll be India's first technical recession in terms of quarterly GDP numbers, the country has faced four recessions in terms of yearly GDP in the past Even though an RBI report has said India has a 'technical recession' for the first time, it's not the really the first 'recession' the country has faced. In fact, it's the 'fifth' time India has seen recession. Before this, India faced four different recessions, with the first one in FY 1957-58. The RBI's views in its latest article are seemingly based on quarterly GDP numbers. India started giving out quarterly numbers in 1996. 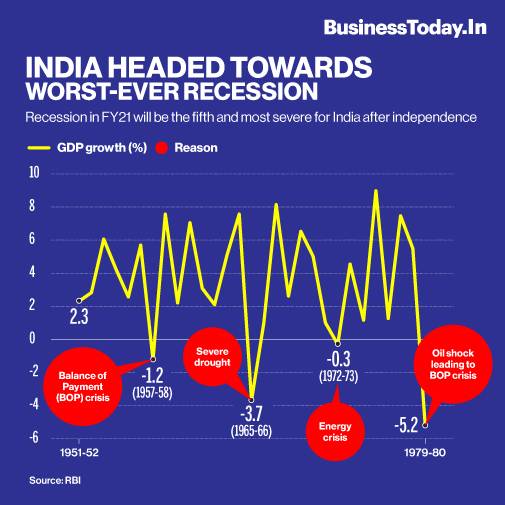 An economy is in recession if it faces contraction for two consecutive quarters. The latest RBI article, titled 'Economic Activity Index', authored by Pankaj Kumar of the Monetary Policy Department, says Q2 will also record GDP contraction and it'll be India's first technical recession. "India has entered a technical recession in the first half of 2020-21 for the first time in its history, with Q2:2020-21 likely to record the second successive quarter of GDP contraction," the author wrote.

The article adds that India's GDP has shrunk 8.6 per cent in the quarter ending September. Notably, the official GDP numbers for the Q2 are yet to come, and the RBI projections are based on the author's 'nowcasting' method. Also, these numbers do not constitute the central bank's official stand on Q2 GDP numbers. The official GDP numbers are slated to be released on November 30. In the first quarter, the economy had shrunk by a historic 23.9 percent on a year-on-year basis.

The article says the index is constructed from 27 monthly indicators using a dynamic factor model and suggests that the economy rebounded sharply from May/June 2020, with the reopening. This contraction is ebbing with "gradual normalisation in activities" but it is expected to be short-lived, it said.

For the full fiscal year, the RBI has estimated that the GDP will contract 9.5 per cent. Similarly, various ratings agencies and research organisations have projected the economy to shrink up to 12.3 per cent in FY21. In its revised estimate, ratings agency Moody's expects a contraction of 8.9 per cent in calendar year 2020, while Fitch Ratings believes the country would see 10.5 per cent negative growth. The IMF has projected shrinking of 10.3 per cent, while Asian Development Bank has claimed a degrowth of 9 per cent.

Not the first recession in terms of yearly GDP numbers

Unlike current fiscal when the main reason for recession is a global pandemic, the previous contractions in India's GDP had two common culprits -- weak monsoon and energy crisis. If India's FY21 GDP contracts for the September quarter, as is projected by analysts, the contraction would, however, be of much bigger scale.

During 1957-58, India encountered its first drop in economic growth when a negative GDP growth of 1.2 per cent was recorded. The reason behind it was a ballooning import bill, which swelled by more than 50 per cent between 1955 and 1957. The FY66 recession was caused by severe drought and wars with China and Pakistan.

In 1965-66, due to drought, food grain production fell 20 per cent. Foreign food aid came to the rescue of the starving population and India received 70 lakh tonnes of food aid in fiscal 1965, equivalent to 10 per cent of domestic production.

The 1972-73  recession came on the back of an energy crisis as the Organisation of Arab Petroleum Exporting Countries (OAPEC) proclaimed an oil and targeted nations supporting Israel during the ongoing "yom kippur" war. As a result, in a short while, oil prices shot up 400 per cent from $3 to $12. Consequently, India's oil import bill rose from $414 million in 1972-73 to $900 million till 1973-74. This was twice the amount of foreign exchange reserves present at that time.