Farm loan waiver: Majority and poorest farmers do not benefit - a status check

There is, however, no silver bullet solution to agrarian distress. It needs long-term planning and multi-pronged strategy. 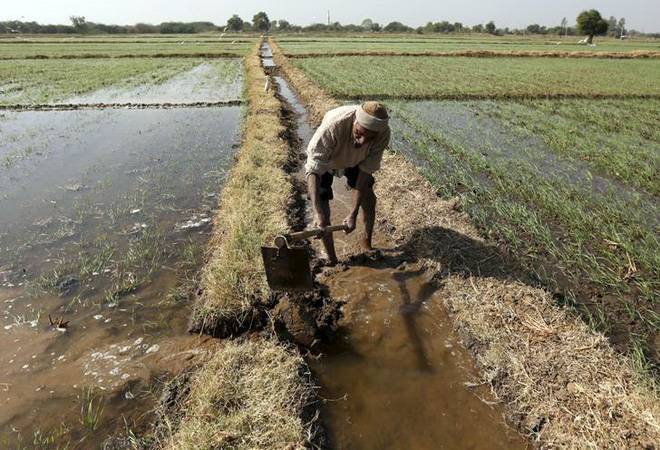 Agrarian distress has come to the centre stage of national discourse primarily because of last year's multiple farmers' marches and the electoral outcomes in the three Hindi heartland states of Rajasthan, Madhya Pradesh and Chhattisgarh. This augurs well for a sector which provides 49% of total employment and supports nearly 70% of population but has largely been relegated to the background.

However, much of the debate is centred around politically expedient and populist measures like farm loan waiver, higher minimum support price (MSP) and of late, investment support for farmers in line with Telangana's popular Rythu Bandhu (Agriculture Investment Support Scheme). What needs to be understood is that agrarian distress did not happen overnight. Niti Aayog's 2017 report, Doubling Farmers' Income,  and many such analyses, state clearly that the problems started after 1991-92 - until when both farm and non-farm sectors grew at the same level - and so requires a comprehensive approach to pull the sector out of the crisis.

Here we take a look at some of the solutions being bandied about these days.

Farm loan waiver is no panacea, but an emergency relief for some farmers, not all. That is because it benefits only those farmers who have taken loans from institutional sources. Last NSSO survey of 2013 showed 52% of agriculture households were indebted but only 60% of those had taken loans from institutional sources.  This means, only 31% agriculture households (60% of 52% indebted households) are likely to benefit from loan waiver.

Also read: Farm Loan Waiver Is Not The Answer

A NABARD study of 2015-16  also reflects similar situation. It says 43.5% of farm households took loans that year (though 52.5% were indebted at the time); 60.4% of which had sourced it from institutional sources and 9.2% from both institutional and non-institutional sources. This too brings the likely beneficiaries of loan waiver to about 30% agriculture households (69.6% of 43.5%). What remain hidden from such calculations are the landless households - the poorest of the poor - who don't benefit from farm loan waiver at all. Their number is shocking: 56.41% of total rural households or 101 million households were landless in 2011, as per the Socio Economic and Caste Census.  Further, Agricultural Statistics of 2017  says agriculture is now dominated by farm labourers, not cultivators - there were 144.3 million farm labourers (or 54.9% of total agriculture workforce), against 118.8 million cultivators (45.1% of total) in 2011. Their number has steadily grown since 1951 when they constituted a mere 28.1%. 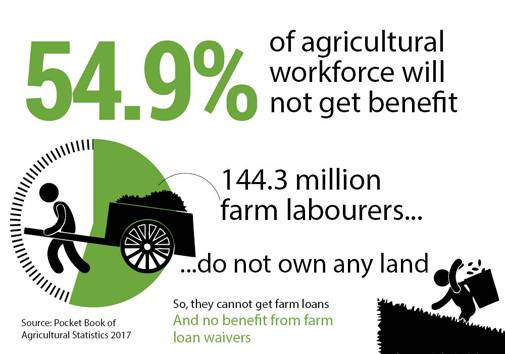 Higher MSP and Bhavantar Bhugtan too benefit a minority

As the Shanta Kumar committee pointed out in 2015,  only 6% farmers directly gain from selling paddy and wheat to the government agencies. It benefits only those with marketable surplus, not all farmers. Worse, 2018 saw markets crashing after higher MSPs were announced in both kharif and rabi seasons. Last October, the prices of cereal, paddy, oilseed and cotton crashed in more than 1,700 markets. This highlighted failure of market reforms like e-NAM (online trading platform).

It is in this context that Madhya Pradesh's Bhavantar Bhugtan Yojana (BBY) - in which farmers directly get the difference between MSP and market price in case of a crash - gained respectability until it was found that traders, more than farmers, benefited from it and was abandoned, only to be resurrected ahead of the last elections. Thus, higher MSP and BBY have their limitations too.

The Telangana Rashtra Samiti's dramatic performance in the last elections has brought its innovative Rythu Bandhu scheme of 2018 - the first direct farmer investment scheme in India - to the limelight and there is a rush of the state governments to adopt it. The Central government too is understood to be working towards such a scheme ahead of the next general elections.

Under the Rythu Bandu scheme, Telangana provides Rs 8,000 per acre per year (now increased to Rs 10,000) - but nothing to the landless or tenant farmers. While its efficacy and adequacy (Rs 833 per month) are yet to be tested or studied, its perceived electoral dividend is very high. Odisha, West Bengal and Jharkhand have now started similar schemes. While West Bengal and Jharkhand have more or less adopted the Telangana formula, Odisha has gone a step ahead by declaring Rs 12,500 for the landless families per annum, in addition to Rs 10,000 per year for all small and marginal farmers.

Another issue is fiscal space, given the tight fiscal situation. Various estimates show a Rythu Bandhu- like scheme for the country would cost between Rs 1.97 to 3 lakh crore. A study by SBI says if Rs 12,000 per year is given to small and marginal farmers (43 million families), it would cost Rs 50,000 crore per year.

The trouble with all these calculations, however, is that tenant farmers and landless/farm labourers who form more than 50% of the total agriculture workforce are completely left out.

Investment is abysmally low and falling

One of the biggest challenges facing agriculture is abysmally low and steadily falling investment levels. According to Agricultural Statistics of 2017, while public investment in agriculture has remained between 0.3% and 0.4% of GDP between 2011-12 and 2016-17, private investment has declined from 2.7% to 1.8% of GDP during the same period - pulling down total investment (both public and private) from 3.1% of GDP 2011-12 to 2.2% in 2016-17. 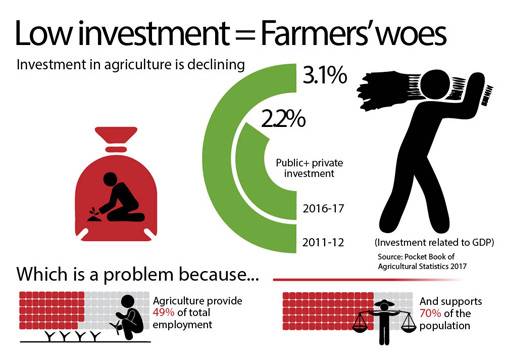 Given the fact that agriculture provides nearly half of country's employment and supports more than three-fourth of population, such investments are too little to have an impact.

There are standard textbook solutions too: increasing productivity outside the green revolution states, value additions, crop diversification, use of technology and innovation, expansion of irrigation, land reforms, land and labour pooling etc.

What is obvious is that there is no silver bullet solution. Given the long-term distress in agrarian economy and its pervasiveness, the solution needs to be long-term and multi-pronged. Short cuts or populist measures are unlikely to have a lasting or meaningful impact.