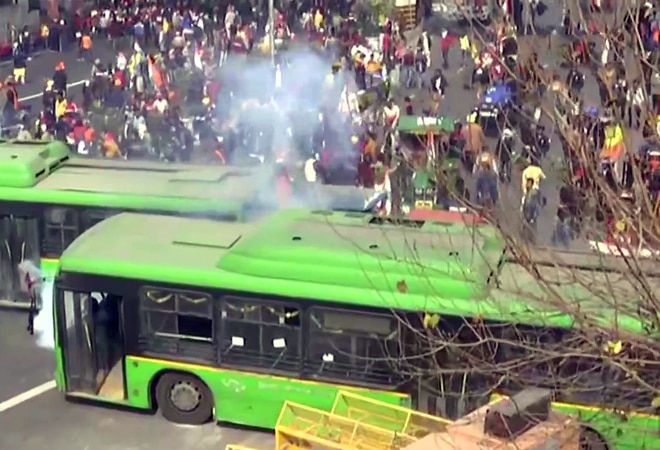 Police use tear gas shells to disperse the protesting farmers at ITO in central Delhi.

Violence has erupted in different parts of the Delhi-NCR amid the mega tractor rally organised by protesting farmers against the three contentious agricultural laws on Tuesday.

Several visuals have surfaced showcasing the disturbing pictures of the scuffle between the police and the farmers in different locations in the NCR as farmers were heading towards Delhi.

Farmers broke the barricades at Singhu, Tikri, and Ghazipur border to start their tractor parade much before the permitted schedule granted by the Delhi police.  The negotiation to hold the tractor rally on Tuesday has gone unnoticed by the farmers. Delhi Police had issued a No-Objection Certificate to the farmer unions with 37 conditions to be followed during the march. In the NOC, the Delhi Police had asked the organisers of the tractor rally to limit protests to 5,000 people and allowed 5,000 tractors during their demonstrations.

However, farmers have not followed these rules. As a result, cops resorted to lathi-charge and using tear gas to maintain law and order.

In Noida Mor, visuals of the scuffle were seen between the police and farmers. Protesting farmers have reached Red Fort and ITO where they have broken police barricades placed opposite Delhi Police headquarters.

Farmers were also seen vandalising a DTC bus in ITO.

In Karnal bypass, a group of Nihang farmers entered with their horses and destroyed the police barricades.

#WATCH Protestors seen on top of a police vehicle and removing police barricading at Mukarba Chowk in Delhi#FarmLawspic.twitter.com/TvDWLggUWA

#WATCH Police use tear gas on farmers who have arrived at Delhi's Sanjay Gandhi Transport Nagar from Singhu border#Delhipic.twitter.com/fPriKAGvf9