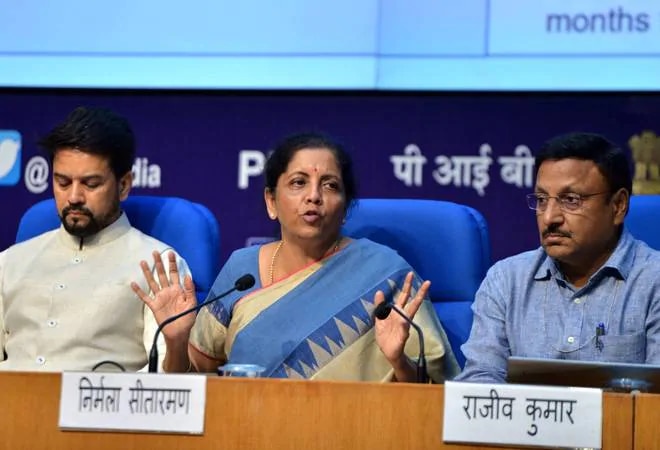 FM Sitharaman is likely to hold a meeting at 4:00 pm on Friday evening

Finance Minister Nirmala Sitharaman is likely to hold a press briefing at 4:00 pm on Friday evening amid expectations that the government would announce a mega consolidation plan for public sector banks.

The Ministry of Finance has called a meeting with chief executives of ten state-run banks, which are seen as top contenders for merger, as per a Business Standard report. The banks invited for meeting today are Allahabad Bank, Andhra Bank, Canara Bank, Corporation Bank, Indian Bank, OBC, Punjab National Bank, Syndicate Bank, Union Bank of India and United Bank of India.

"The PSB merger will be announced anytime soon as part of the government's reforms agenda," the daily quoted a top source close to the development as saying.

The government has already consulted the Reserve Bank of India in this regard earlier this year, the source reportedly said.

Nirmala Sitharaman on Thursday said the Centre will announce two more big steps in the coming days to give momentum to industry. The minister, however, did not elaborate on the two steps to be taken by the government.

The BJP-led NDA government is expected to speed up the banking consolidation, especially, in the public sector banks (PSBs). The plan is to create a few large banks by merging 2-3 banks together.

During its first term in office, the Narendra Modi government had announced the merger of five associate banks and Bharatiya Mahila Bank with State Bank of India in April 2017, which was the first off the block. The recent merger of Bank of Baroda (BoB), Dena Bank and Vijaya Bank, which became effective from April this year, was second development in this regard. The banking industry is already working on cleaning up its balance sheets.

On August 23, the Finance Minister had announced a slew of measures to nurse the ailing Indian economy to health, including an immediate release of Rs 70,000 crore to public sector banks. She had also said that banks have agreed to pass on the benefits of repo rate cut to their customers and that EMI for various loans will be reduced by linking repo rates and external benchmarks to interest rates.

Govt to set up 12,500 Ayush centres across India: PM Modi