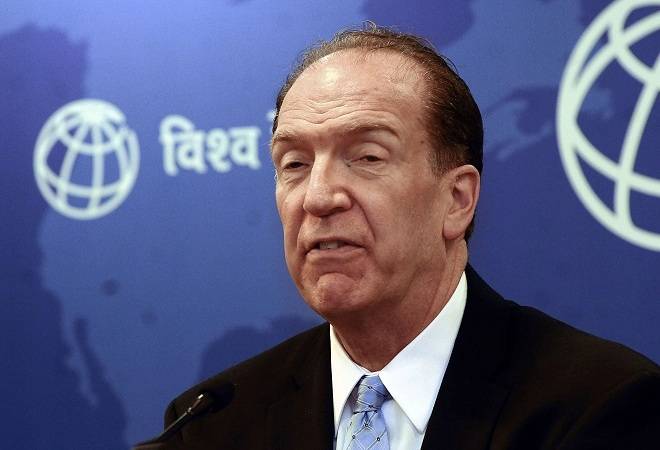 Innovations in financial sector and openness and improvements in governance structures can help India achieve Prime Minister Narendra Modi's goal of $5 trllion economy target, says David Malpass, president, World Bank Group. During his first official visit to India which began on October 26, Malpass spoke to media on the outcome of his interactions with Indian leaders, World Bank's India commitments, and his prescriptions for future growth.

Excerpts from the Malpass' press conference:

I had productive meetings with Prime Minister Modi and Finance Minister Sitharaman. With the Prime Minister, we covered a range of topics including priority infrastructure financing, strengthening regional connectivity especially through inland waterways, opportunities for civil service reform, importance of the India-Africa partnership and future opportunities for knowledge exchange.

Finance minister shared some of the key areas where she sees increased Bank engagement in the coming months - strengthening the statistics architecture of India, financial market reforms, access to finance for small and medium enterprises, human capital and improving water supply. And I spoke at NITI (Aayog) that's to a group of today's leaders. And then in Gujarat, I will be meeting the new leaders in the civil service of India. In the NITI speech, I spoke about the importance of strengthening India's financial system and the growth potential of that system.

On World Bank's commitments and Ease of Doing Business rankings

World Bank right now has 97 projects worth $24 billion (in India). We expect this to continue and reflect the projects and reforms that are going on in India. May be its going to be $5 billion to $6 billion per year. India made progress on the ranking. There was improvement in registering businesses, trading across borders, insolvency resolutions and construction and the construction process. I think there can be more progress on land purchase and permitting process and the enforcement of contracts.

As far as competitive advantage is concerned, you know, other countries in Asia have done pretty well. And I think a country's competitiveness is a combination of factors. It's partly because of the ease of doing business but there are many other factors as well. Investors look at macro economic stability, the skills of the workforce, etc. So while I congratulate India on the progress that has been made in doing business ranking, I think there's even more that can be done in the future. And that that will all factor into making India even more competitive in a global marketplace.

India's financial sector has made quite a bit of progress in terms of the monitoring the assets, bankrupcy process, etc. We need to encourage progress in three primary areas. One is to allow growth of the banking sector, second is to permit and allow and encourage the deepening of capital markets like bond, mortgage, etc and the third is the regulation of non-banking financial companies (NBFCs) which has grown in importance with the Indian financial system to reduce risks. So, I think strong regulation of those will be helpful to the growth of the financial sector and that sector is vital to India's overall growth. Prime Minister Modi has a goal of $5 trillion, a powerful goal that will be assisted by the innovation in the financial sector.

Trade uncertainity is a drag on global growth along with other factors such as Brexit, such as the frozen capital as in bonds that are yielding zero and negative yields on bonds, and the low investment rate going on in the world. So those are all factors and I think what is to be done is better programmes that are better growth programmes, country by country. I think India has taken a good step with the cut in the corporate tax rate. So, that will help us to grow. And there are more steps that India can take to benefit the growth rate. Economists have lots of forecasts. So what what we're seeing is that India's being affected by a global environment and has slowed from the fastest growth rate in the earlier years, very much related to the slowdown in global growth. So my prescription or suggestion is that there should be openness and improvements in government structures to allow faster growth. And I think India has a very good platform for doing that because of the experience India has with technology.

On how to trigger growth

If we look back over the last three years, India has been in the top 10 all three years. So it's a big improvement and over the years it could do better by ensuring the commercial courts have adequate resources and are at the district level so they can deliver judgements faster. This will increase the ability to enforce contracts in a faster way. There are also the possibility of the establishment of a fast track commercial resolution mechanism. Some countries have small claims courts to help people  enforce contracts. Digitalisation of the land data would facilitate buying and selling of land. I think from the standpoint of global growth, it is country-by-country 'Improvement in the Systems' system that encourages more investment. For some other countries, a better rule of law can give confidence, for others it could be better tax system. Looking around the world, one of the most valuable areas of progress is when small businesses form and grow. We can look around the world and see that in quite a few parts of the world. There's not enough progress in that area. And those are areas that governments can work on to improve.

Have not sold any gold; change in revaluation frequency behind reserve fluctuation: RBI