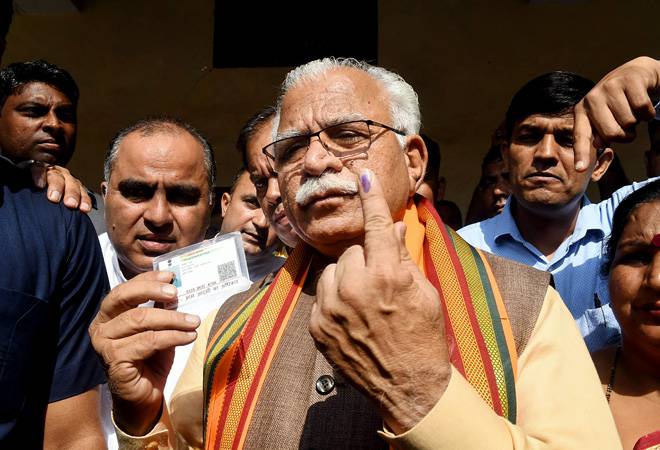 Haryana Chief Minister Manohar Lal Khattar has reportedly sought an appointment to meet Governor Satyadev Narayan Arya. During the meeting, the BJP leader is likely to stake claim to form the next government in the state. Counting of votes for 90 assembly constituencies are underway in the state.

As per Election Commission trends, the Bharatiya Janata Party (BJP) has won 26 seats and is leading on 14 others, taking the tally to 40 seats. Meanwhile, Congress party has bagged 20 seats already and is ahead on 11 more - 31 seats in total.

Since both parties are falling short of the 46-seat mark, remaining players in the fray are likely to play a crucial role in forming a government. The most important of them is Dushyant Choutala's Jannayak Janata Party (JJP) which has won 10 seats in the state.

Among the independents, five have won their respective seats, whereas two others are in the lead. Indian National Lok Dal (INLD) and Haryana Lokhit Party have won 1 seat each.

While both BJP and Congress have reportedly proposals of alliance to Choutala's JJP, he has maintained that no such discussions have happened. A decision on the matter will be taken only after the final numbers are out.

BJP's decision to meet the Governor even before the final seat tally is out might be a sign of their confidence that they can secure JJP's support.

Meanwhile, reports suggest that Congress chief Sonia Gandhi has given free rein to Bhupinder Singh Hooda, Leader of Opposition in Haryana Assembly, on government formation and alliance with JJP. Congress might even offer the CM seat Choutala to win JJP's confidence. The party will still need to win over independents for a shot at power.