Congress chief Sonia Gandhi has reportedly given Bhupinder Singh Hooda, Leader of Opposition in Haryana Assembly, free rein to take a call on alliance with JJP 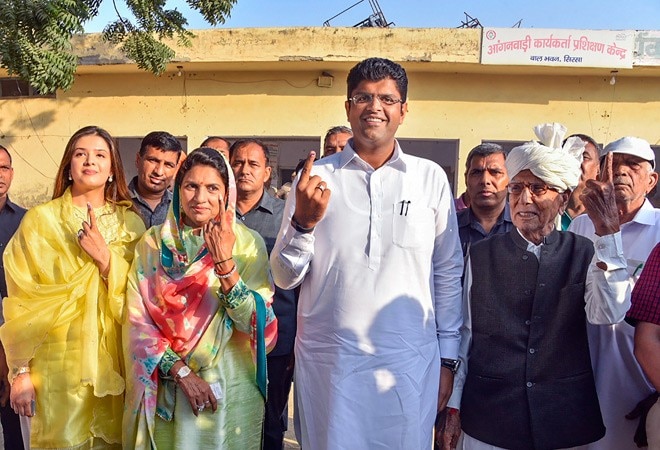 JJP leader Dushyant Choutala said that a call on alliance will be taken after the final numbers are out. File photo/ PTI

Dushyant Chautala of JJP has stated that the he has not talked to anyone about forming government in Haryana. Both BJP and Congress have reportedly extended proposals of alliance to JJP after the regional party emerged as the kingmaker in the state.

Talking on reports of Congress planning to offer him the CM post, Chautala said that he has not had any discussion in the matter. He further said that decision in this regard will be taken only after the final numbers are out. Counting of votes in 90 constituencies is on in the state.

Jannayak Janata Party Chief Dushyant Chautala on reports of Congress offering him CM post: I have not had any discussions with any one. Decision will be taken only after the final numbers are out. #Haryanapic.twitter.com/w0FRJPawwc

Congress president Sonia Gandhi has reportedly spoken to Bhupinder Singh Hooda, Leader of Opposition in Haryana Assembly, giving him free rein on government formation. She has entrusted him with taking a call on Dushyant Chautala. She has told him to take all decisions regarding government formation on his own as well as decide on whether to give the CM post to JJP, sources said.

Official trends from Election Commission of India (ECI) showed BJP and Congress engaged in a neck-and-neck battle in Haryana. ECI trends show BJP leading in 37 seats, whereas Congress is ahead in 35 constituencies. JJP has already won one seat and is ahead on 9 other seats. Dushyant Chautala is leading from Uchana Kalan seat against BJP candidate Prem Lata by 38,393 votes.