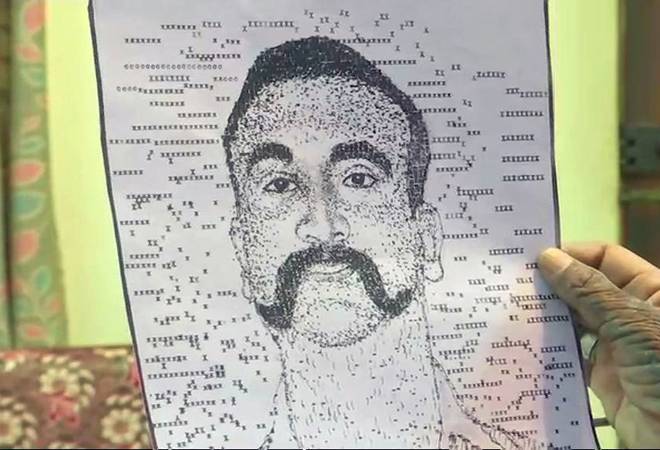 Indian Air Force (IAF) Wing Commander Abhinandan Varthaman has struck a chord with people for his utmost dignity and valour in the face of extreme situations he faced in Pakistan during his two-day captivity. In an attempt to pay tribute to the IAF pilot, an artist from Bengaluru has created a typewriter portrait of Abhinandan.

AC Gurumurthy fleshed out a black and white portrait resembling Abhinandan by typing letters, symbols, numbers and special characters on the keyboard. The artist said he took two hours over a period of two days to finish the portrait.

"Unlike heroes in film, Abhinandan is a real hero. He bought real laurels to the country. I has inspired me." Gurumurthy told ANI news.

"I appreciate his bravery and the night he returned to India, I made this attempt." He added.

Bengaluru: Artist creates a portrait of Wing Commander Abhinandan using a manual typewriter. AC Gurumurthy, artist says, "He is the real hero, he brought real laurels for our country, this is what inspired me." #Karnatakapic.twitter.com/PFQC2E2gMu

Coincidentally, Gurumurthy has also attempted portraits of other leaders and famous personalities in the past with his typewriter. The artist has created sketches of Mahatma Gandhi, Mother Teresa, former President APJ Abdul Kalam, Former US President Barrack Obama, former Tamil Nadu chief minister J Jayalalalitha and a host of other eminent world personalities.

Gurumurthy, who used to work in a bank earlier, uses large scale white sheets to bring out his art with his unique talent on paper. The artist told the news agency he hoped to enter the Limca Book of Records and Guinness World Records with his feats.

IAF pilot Abhinandan was captured by the Pakistani army from Horran village (barely 7 km from the LoC) in Bhimber district of PoK after ejecting from his jet, which caught fire in an ensuing mid-air dogfight with Pakistani fighters.

However, it released the IAF pilot 60 hours after keeping him in captivity.