India faces worst locust swarm attack in decades: What does it mean for agri economy?

So far, locusts have been controlled in more than 14,000 hectares of land in Rajasthan and Punjab, says Narendra Singh Tomar, Union Minister of Agriculture and Farmers Welfare 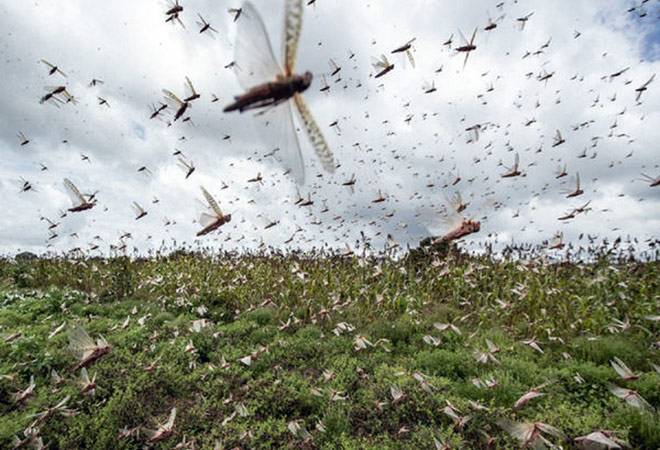 At a time when the COVID-19 pandemic has already disrupted farming, India is facing one of the worst locust attacks in decades which are destroying crops on a large scale and undermining food security of the country. The desert locusts have damaged crops in various parts of the country, including the heartland states of Madhya Pradesh, Rajasthan and Uttar Pradesh. Soon after invading districts of the heartland states, locusts have now reached Gujarat, Punjab and other parts of the country, forcing the government to declare a state-wide alert.

The locusts, which bred and matured in Iran and Pakistan's Balochistan, reached India last year. The farmers were taken unaware as it took place after decades. The Central and State governments are working together on the desert locust control measures to check its spread.

Normally, with the arrival of the monsoon, locust swarms enter the scheduled desert areas of India via Pakistan for breeding in the summer of June-July, but this year, presence of locust hoppers was reported from April 11, 2020; and pink adult swarms were reported since April 30 in border districts of Rajasthan and Punjab, which have been controlled while control operations against new swarms is going on. One reason for this was the uncontrolled swarms of the previous season in Pakistan that breed continuously. Swarms of pink immature adults fly high and travel long distances with strong winds coming from Pakistan. Most of these pink immature adults settle on trees during the night and mostly fly during the day.

Earlier this month, the Union Minister of Agriculture and Farmers Welfare, Narendra Singh Tomar held a meeting with representatives of pesticide manufacturing industry and asked them to fine tune a strategy to prevent locust attacks on agricultural fields. He said agriculture is a priority sector and the government will leave no stone unturned to ensure uninterrupted sowing and harvesting operations. New machines have been ordered from the United Kingdom and will arrive soon, he said.

So far, locusts have been controlled in more than 14,000 hectares of land in Rajasthan and Punjab, the minister said.

Locust is an insect that belongs to species of grasshoppers. The desert locust is one of the species of short-horned grasshoppers in the family Acrididae that have a swarming phase. These insects are usually solitary, but under certain circumstances they become more abundant and change their behaviour and habits. As their population become dense, they form swarms and start damaging the crops.

How does locust attack affect the economy?

Locusts swarms can fly up to 130 km in a day and each locust can eat around two grams of crop i.e. equivalent to its own weight. These swarms destroy crops and disrupt  agricultural economy in what is commonly referred to as locust plague.

India has reached out to Afghanistan, Iran, Pakistan and Africa for a joint effort at the international level to contain the spread of locust which pose a major threat to food security in the region. A high-level virtual meeting on desert locusts in Southwest Asian countries (Afghanistan, India, Iran and Pakistan) was held on March 11, 2020 in New Delhi, India.

Despite the prevailing COVID-19 lockdown, the Locust Control Offices are working since April 11, 2020 with 50 spray equipment/vehicles, in coordination with officials of District Administration and State Agriculture Department, according to Union Agriculture and Farmers Welfare Minister. Tractor mounted sprayers and fire-tender vehicles deployed at various locations are being used in locust control. Additional equipment are also being procured to increase the control capacity of Locust Control Organisations.

Last year, the state governments had assisted farmers through schemes focusing on the use of pesticides and tractor mounted sprayer. During the year 2019-20, there was a massive locust attack in India, which was successfully controlled by the Locust Circle Office personnel with the State Agriculture and District Administration officials. Control operations were conducted from May 21, 2019 to February 17, 2020; and a total of 4,03,488 hectares of area were treated and locust swarms controlled, as per the Ministry of Agriculture and Farmers Welfare.