Speculations connected the cold shoulder given to Bezos to the editorial stance of Washington Post, which is owned by the Amazon CEO and has been critical of the Indian government 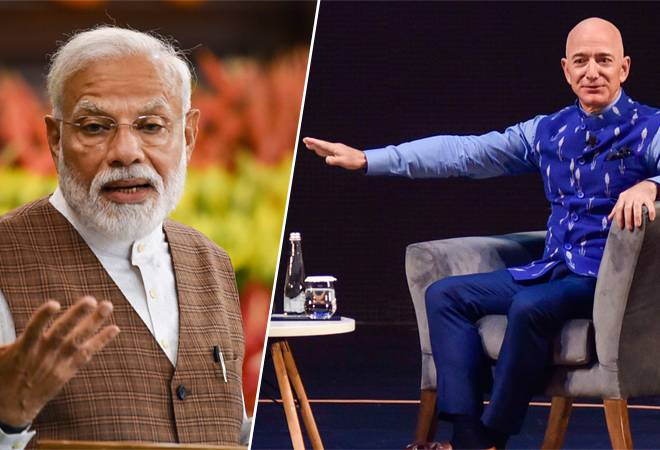 Narendra Modi is all about getting global corporates' attention to India. So, when the Indian Prime Minister gave Jeff Bezos a wide berth on his recent visit to India, the cold reception was a bit too apparent. Speculations connected the cold shoulder to the editorial stance of Washington Post, which is owned by the Amazon CEO and has been critical of the Indian government. And now a BJP functionary has openly worded the party's displeasure with the influential US daily.

Mr @JeffBezos , please tell this to your employees in Washington DC. Otherwise your charm offensive is likely to be waste of time and money . https://t.co/L06kI0AqLn

Talking to The Economic Times, Chauthaiwale said that he is not opposing Amazon, but is "certainly against the one-sided, biased, agenda-driven anti-Modi editorial position of Washington Post".

Washington Post has been extremely critical of the Modi government in recent times. After Jammu and Kashmir was stripped of its special status last year, the daily published several news and opinion pieces where it took potshots on PM Modi being conferred 'Global Goalkeeper' award from Bill and Melinda Gates Foundation.

On December 13, 2019, the Post published an article titled "India's new law may leave millions of Muslims without citizenship" in an open criticism of the Citizenship Amendment Act. This did not sit well with many in the government. Opinion piece 'The world's largest democracy is pushing back. Modi should listen.' published in Washington Post on December 24, 2019
Click here to Enlarge

The government has labelled intense and persistent protests against the amended citizenship law across the country as a result of Opposition misrepresenting the legislation with an ulterior motive. BJP has been conducting outreach programmes to present its side of the tale on CAA before the public.

Moreover, Washington Post has lent its space to journalists like Barkha Dutt and Rana Ayyub, who have been quite vocal in their criticism of the BJP-led government in Centre.

Meanwhile, not disheartened by the government's apathy, Bezos lauded India for its potential and even promised to invest $1 billion in India in coming days. Union Commerce Minister Piyush Goyal was not impressed, though, calling Amazon's proposed investment no big favour to India.

Bezos indirectly has responded to the government's snub with an open letter to Amazon's customers, sellers and partners, he said that Amazon's initiatives will create 1 million jobs in India.

"I'm excited to share that we will invest an incremental US$1 billion to digitize micro and small businesses in cities, towns, and villages across India, helping them reach more customers than ever before. As part of this initiative, we will use Amazon's global footprint to enable US$10 billion in exports of Indian products to the rest of the world by 2025. Our investments in India will create an additional 1 million jobs across the country by 2025," Bezos wrote in the letter before leaving India on Friday. 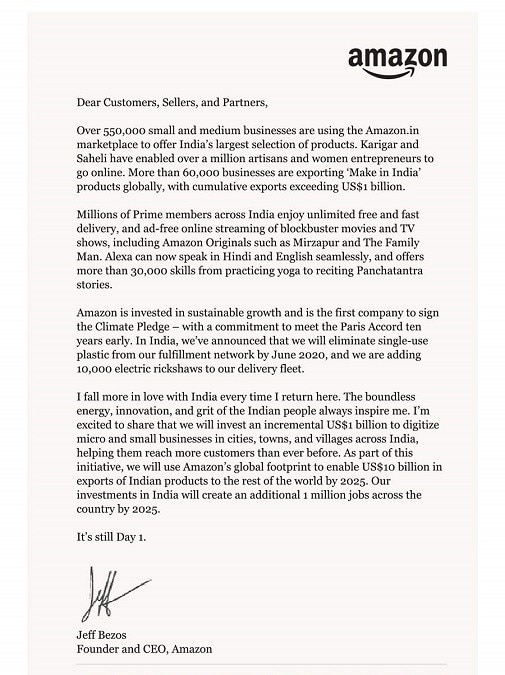