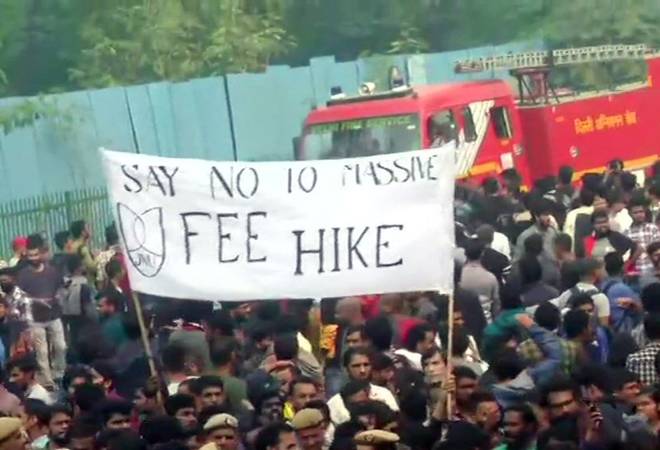 Members of the Jawaharlal Nehru Students' Union (JNUSU) staged a protest at the university campus during the convocation ceremony on Monday against the "anti-student'' policies of the varsity's administration. The protest is part of the agitation against the hostel manual and several other issues like restrictions by the administration on entry to the Parthasarathy Rocks, attempts to lock students' union office, according to the students.

The protest took place near the convocation venue where vice president M Venkaiah Naidu was speaking as a chief guest.

One of the protestors told news agency ANI that the protests have been going for the last 15 days over the pertinent issue of fee hike.

"At least 40 per cent students come from poor backgrounds. How will they study here?" the protestor added.

Students in large numbers have participated in the protest with many carrying banners with messages against fee hike.

The JNU administration on last Thursday appealed students to maintain peace and to stop agitating against the draft hostel manual, which allegedly has provisions for fee hike and dress code.

The administration authorities also expressed concern regarding the academics which is getting disturbed due to the protests. "This is a matter of grave concern that academic life at the University has come under severe threat due to the ongoing students. We appeal the students to allow academic activities to resume normally," the dean had said in a statement.