Lok Sabha 2019 polls: PM Modi says the Congress needs to be decisively defeated to ensure poverty eradication, modern infrastructure and development of all sections of society. 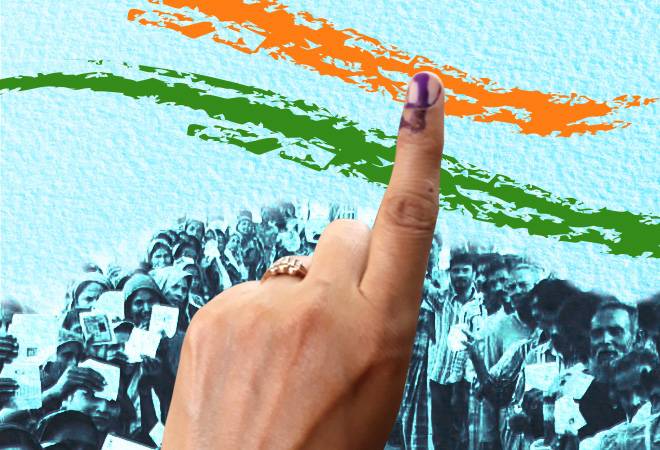 Lok Sabha polls 2019: Despite a huge security concern, 54.4 per cent voting was recorded in Jammu and Kashmir's two Parliamentary constituencies.

Lok Sabha election 2019: Prime Minister Narendra Modi during a public rally in Ahmednagar, Maharashtra, on Friday targeted Congress chief Rahul Gandhi, asking voters to choose between 'Imandar Chowkidar' and 'bhrashtachari naamdar". "I have no expectation from the Congress since it has stopped thinking about people long ago," he said. He also said the previous government was a weak government, and that the soldiers demanded revenge from Pakistan, but the government never dared. The first phase of elections across 18 states and two UTs ended with over 50 per cent voter turnout across all 90 Lok Sabha constituencies on Thursday. While maximum 81.8 per cent voter turnout was recorded in Tripura, around 50 per cent people voted in Bihar for the four Lok Sabha seats. States like Andhra Pradesh, Telangana and Uttarakhand registered 66 per cent, 60 per cent, and 57.8 per cent voting, respectively. Despite a huge security concern, 54.4 per cent voting was recorded in Jammu and Kashmir's two Parliamentary constituencies. Polling was going on late night on April 11 in over 300 booths in different districts of Andhra Pradesh as faulty EVMs hampered voting in the day.

Here are the live updates of first phase of the Lok Sabha Elections 2019.

4:20pm: Rajasthan CM Ashok Gehlot garlanded with lemons and chillies by National Students' Union of India (NSUI) workers at an event in Bhilwara.

Rajasthan: CM Ashok Gehlot garlanded with lemons and chillies by National Students' Union of India (NSUI) workers at an event in Bhilwara. pic.twitter.com/TbMJpLgcT8

4:00pm: The Election Commission prohibits Up CM Yogi Adityanath from campaigning for 72 hours, BSP supremo Mayawati for 48 hours for violation of Model Code of Conduct.

Election Commission prohibits #YogiAdityanath from campaigning for 72 hours, #Mayawati for 48 hours for violation of Model Code of Conduct#LokSabhaElections2019pic.twitter.com/vHpyPhQIiW

3.08pm: Nirmala on 'letter' by armed forces veterans: "We learnt of ex-servicemen reached the President. I would like to draw the attention that two senior officers have both highlighted that in petition they have not given their consent."

Union Minister Mukhtar Abbas Naqvi after BJP delegation met EC: Rahul Gandhi has crossed all limits by using such level of unparliamentary language for PM. He's chief of Congress's 'gaali gang.' Have demanded action be taken against his statements, which aren't based on facts. pic.twitter.com/vtwuL9o8Rg

2.33pm: Nirmala Sitharaman on purported letter to Pres signed by Armed Forces veterans: "Two senior officers said they have not given consent,worrying that fake letters being signed by vested groups."

Nirmala Sitharaman on purported letter to Pres signed by Armed Forces veterans: Two senior officers said they have not given consent,worrying that fake letters being signed by vested groups.Condemnable. Rashtrapati Bhawan has also said that they have not received the letter. pic.twitter.com/7CqHmAcvA9

2.00pm: "We have said in our manifesto that everyone will be given a new house by 2022. We will provide power, water supply, free health insurance worth Rs 5 lakh, and Rs 6,000 per year to every farmer," says Amit Shah. The BJP chief is holding a rally in Keonjhar, Odisha.

#WATCH Union Minister Smriti Irani: In the last 5 years, they have attacked me in every which way possible. I only have one message for them, the more you will insult me, the more you will attack me, the harder I will work against Congress in Amethi. pic.twitter.com/ag3R9JV4yL

1.40pm: The Congress releases the video: "Demonetization, GST, Employment, Farmers - the truth of Modi Govt. about these has come out."

12.55pm: "Do you remember the previous ten years of the earlier remote-controlled government? Scams and delays in decision- making were the order of the day. You need to now choose between Imandar Chowkidar and Bhrashtachari Naamdar," Modi said.

Demonetization, GST, Employment, Farmers - the truth of Modi Govt. about these has come out.

The people have gone through inaction of Modi Govt. in the past 5 years but now they want Modi to see the 'Sach ka Aina'.
Stop misleading the people.

12.35pm: The Congress statement on Army veteran's letter to the President.

12.29pm: The number of independent candidates elected in respective years; it has been showing a decreasing trend over the years.

Press statement by @priyankac19, Convenor- Communications and National Spokesperson, on the letter written to the President of India by veterans of Armed Forces. pic.twitter.com/bf8ecIltxK

12.13pm: CPI(M) general secretary Sitaram Yechury on Friday asked the Election Commission to act strongly against the ruling BJP for its "despicable attempts" to politicise and misuse the armed forces during the ongoing election campaign, reports PTI. Over 150 armed forces veterans have written to President and Commander-in-Chief Ram Nath Kovind to complain about the manner in which political parties have been repeatedly using armed forces for political gains ahead of the Lok Sabha election.

12.08pm: BJP MP Meenakshi Lekhi moves a contempt petition against Congress President Rahul gandhi. Lekhi says the words used and attributed to the SC in the Rafale case has been made to look something else. "He is replacing his personal statement as the SC order and trying to create a prejudice," says the plea.

11.38am: Makers of the film move Supreme Court against the stalling of the film's release. The SC agrees to hear the case on April 15.

No. of independent candidates elected in respective years; It has been showing a decreasing trend over the years. The number fell from 37 in 1952 to 3 in 2014.#LokSabhaElections2019#GeneralElections2019pic.twitter.com/xhG2OR17Up

11.26am: Congress President Rahul Gandhi will address a rally in Tamil Nadu.

11.17am: The SC directs all political parties to give poll panel details of identity of donors, amount in account of donors by May 30 in sealed cover. The SC says it would examine in detail changes made in law and ensure balance does not tilt in favour of any party.

10.46am: Twitter says over 45.6 million tweets were recorded related to the Phase 1 of the Lok Sabha polls from India and across the globe.

10.43am: The Supreme Court has asked all political parties to disclose all particulars relating to donations received through electoral bonds to the Election Commission of India (ECI) in sealed covers by May 30.

10.38am: The Kerala Christian Forum has expressed hope that Amit Shah and the BJP tender apology on the BJP's remarks on minority.

Makers of biopic 'PM Narendra Modi' move the Supreme Court against the stalling of the film's release. Supreme Court agrees to hear the case on April 15. pic.twitter.com/QWh6CnPOlb

10.30am: More than 3,000 people form a human chain at the Pamban Sea Bridge in Rameswaram to spread election awareness.

10.15am: Kerala Christian Forum has said Amit Shah's statement that "We'll (BJP) ensure implementation of NRC in country. We'll remove every single infiltrator from country,except Buddha, Hindus & Sikhs," is direct attack on identity and integrity of the nation as a secular state.

10.05am: AAP may form an alliance with JJP (Jannayak Janata Party) in Haryana. Seat sharing formula: six seats for JJP and four for AAP. Both the parties will hold a joint press conference tomorrow.

10.00am: TDP-YSRCP supporters face off again: Supporters of both the parties resort to stone pelting as clashes continue in Andhra's Kurnool.

9.55am: Two groups of Bharatiya Janata Party (BJP) workers clash during a rally in Masuda, Ajmer.

In the last month, the top conversation topic for #LokSabhaElections2019 on Twitter was national security, followed by religion, jobs, agriculture, and taxes and trade. pic.twitter.com/QRxJtW7Cl0

The Kerala Christian Forum also expressed hope that Amit Shah & BJP tender apology to the nation & especially to the minority communities of the country, which has felt persecuted by the statement. https://t.co/6nJ8G1HLlY

9.30am: Several security personnel on election duty in Noida were served meals in packets labelled "Namo Foods", triggering criticism from the opposition even after the local police said the packs only displayed the name of a food shop. The Bahujan Samaj Party said it has complained to the Election Commission. Union minister Mahesh Sharma is the Bharatiya Janata Party candidate seeking re-election there. The packets, coloured in a shade of saffron and with "Namo" emblazoned on the top in Hindi and foods' in English, soon generated a buzz among curious onlookers. (PTI)

9.25am: A glance at the voter turnout on Thursday.

9.15am:  Local poll authorities in Maharashtra are learnt to have told the EC here that Prime Minister Narendra Modi's remarks asking first-time voters to dedicate their vote to those who carried out the Balakot air strike, are prima facie violative of its orders, asking parties against using the armed forces in their campaigns. Addressing a rally in Ausa in Maharashtra's Latur on April 9, Modi said, "Can your first vote be dedicated to those who carried out the air strike."

9.10am: Prime Minister Narendra Modi to address rallies in three states today. "Today's campaigns will be in Maharashtra, Karnataka and Kerala," says the PM.

9.00am: 15 EVMs damaged during Phase 1 polls: A total of 15 electronic voting machines (EVMs) were damaged due to vandalism in the first phase of the Lok Sabha election Thursday, the Election Commission said. While there were six reports of EVM damage from Andhra Pradesh, Arunachal Pradesh reported five matters, one each were from West Bengal and Bihar and two from Manipur, reported PTI. Senior Deputy Election Commissioner Umesh Sinha said action would be taken for damaging electoral material and various sections of the Indian Penal Code.

Nine states to raise Rs 9,800 crore through auction of securities on April 15: RBI