PM Narendra Modi will kick-off his political campaign for the 2019 Lok Sabha elections tomorrow. He will visit Jammu and Kashmir for his first political rally. 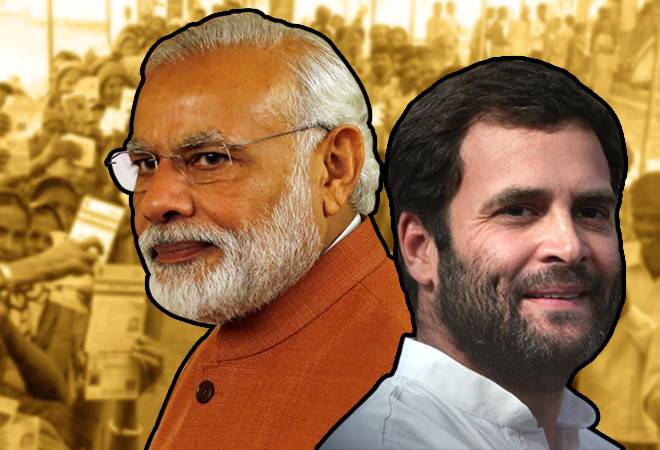 PM Narendra Modi will begin his campaign for 2019 Lok Sabha elections from tomorrow. He will hold his first event in Jammu and Kashmir, BJP leader Ram Madhav said.

Earlier today, PM Modi announced that India has successfully tested its Anti-Satellite (ASAT) missile under Mission Shakti. Following this, BJP and Congress have been blaming each other out of trying to usurp the credit for the project.

Shortly after, Finance Minister Arun Jaitley held a press conference to denounce the claims made by Congress. He referred to media reports which claimed that the scientists were denied permission during the UPA regime to go ahead with the project.

08:41 pm: The Election Commission of India has said that the matter related to Prime Minister's address to the nation today afternoon has been brought to its notice. The ECI has directed a Committee of Officers to examine the matter immediately in the light of Model Code of Conduct.

Election Commission: Matter related to address of the Prime Minister to the Nation on electronic media today afternoon has been brought to the notice of ECI.The Commission has directed a Committee of Officers to examine the matter immediately in the light of Model Code of Conduct

07:40 pm: Congress General Secretary Priyanka Gandhi has said that she will definitely contest the 2019 Lok Sabha elections if the party asks her.

Priyanka Gandhi Vadra on being asked if she will contest in #LokSabhaElections2019: I've not decided yet; If my party asks me to contest, I will definitely contest. My wish is to work for the party. pic.twitter.com/r7oQlLa1qN

06:56 pm: Biju Janata Dal has released another list of nine candidates for the 2019 Lok Sabha elections.

06:30 pm: The CPI (Marxist) has written to the Election Commission of India over PM Modi's address to the nation on Mission Shakti ASAT missile programme. In its letter, the party has said that the Prime Minister's announcement is in violation of the model code of conduct imposed in view of the Lok Sabha election, as he is a candidate himself.

06:18 pm: BSP chief Mayawati has criticised Congress' minimum income guarantee scheme NYAY, calling it a bluff. She also took a dig at the BJP, saying that the ruling party does not have exclusive rights to polls bluffs and promises.

06:14 pm: The All India Trinamool Congress has launched its manifesto for the 2019 Lok Sabha elections. The party has promised an investigation in demonetisation and revival of the Planning Commission if the party comes back to power.

05:53 pm: The Bombay High Court will hear the plea againt the release of PM Narendra Modi's biopic on March 29.

Bombay High Court to hear plea against the release of the film 'PM Narendra Modi' on 29 March 2019. pic.twitter.com/4eyQFZl59z

04:55 pm: West Bengal CM Mamata Banerjee has said that she will approach the Election Commission over the politicisation of ASAT test firing. She said that the success of the programme is to the credit of the scientists and its their prerogative to announce it.

WB CM on #MissionShakti: It's a political announcement, scientists should have announced it, it's their credit. Only one satellite was destroyed, that wasn't necessary, it was lying there since long, it's the prerogative of scientists, when to do it. We will complain to the EC. pic.twitter.com/4WKRXivX1y

Thus speaks the inheritor of the dynasty that thinks - All the nation's a stage!

Masquerading as leaders, all that ‘The Dynasty’ has done is to plunder, weaken and ruin the nation. https://t.co/vXYFLWO7MN

04:45 pm: Congess party will increase the representation of OBCs and will more chances to people from the community to become MPs and MLAs, party chief Rahul Gandhi said during a national convention of AICC OBC wing.

04:42 pm: West Bengal Chief Minister Mamata Banerjee has asked what was the need for PM Narendra Modi to take credit for Mission Shakti ASAT programme when model code of conduct is place before 2019 Lok Sabha elections.

West Bengal Chief Minister and TMC leader Mamata Banerjee on #MissionShakti: What was the need for Modi at the time of election to violate the model code of conduct to take the credit? Does he work there? Is he going to space? pic.twitter.com/WIy9iPglRk

04:36 pm: Defence Minister Nirmala Sitharaman raised questions on the news portal which Congress approached to publish its sting operation. Sitharaman said this was the same website which had telecasted Kapil Sibal's press conference on EVM live back in January.

Accusing the Congress of conspiring to defame BJP, the Defence Minister said that BJP is taking legal advice to take the individuals and institutions involved in such activities to court.

Defence Minister Nirmala Sitharaman: I would like to state here, BJP is taking legal advice. We're taking every possible advice so that institutions & individuals who are part of this conspiracy to defame BJP, we will take them to the court. We will take action on them legally pic.twitter.com/eTzA0bWzA1

04:00 pm: PM Narendra Modi will kick off the political campaign for 2019 Lok Sabha elections from tomorrow. He will visit Jammu and Kashmir on the first day of his campaign.

03:30 pm: The Election Commission of India has issued a notice to the makers of PM Narendra Modi's biopic.

03:15 pm: BJP fields Giriraj Singh from Begusarai. Announcing the development, BJP president Amit Shah said that the party will solve all the issues he has reported.

Amit Shah: Shri Giriraj Singh will contest Lok Sabha elections from Begusarai. Party organization will solve all the issues he told me about. I wish him for the elections. (file pics) pic.twitter.com/6quGUFxfZe

02:58 pm: Finance Minister Arun Jaitley denounced claims by Congress that the A-SAT programme began under the UPA government. He said that the programme was initiated in 2014 after getting the approval of PM Narendra Modi.

FM Arun Jaitley on #MissionShakti: The process started in 2014 after the PM gave the permission, it's a huge achievement, not only we have become space power but we are now in big four. We should not forget that tomorrow's wars will not be the same as yesterday's wars. pic.twitter.com/gEWdpVXWuz

02:58 pm: Congress president Rahul Gandhi congratulated the DRDO on the success of Mission Shakti and mocked PM Modi in the same tweet.

Ahmed Patel,Congress: The UPA government had initiated the #ASAT program which has reached fruition today. I congratulate our space scientists and the visionary leadership of Dr Manmohan Singh. #MissionShakti (file pic) pic.twitter.com/mEo2XU8yTd

What is ASAT and how can it be used in war?

EMI facility on your debit card? Visa introduces new platform; here's all you need to know